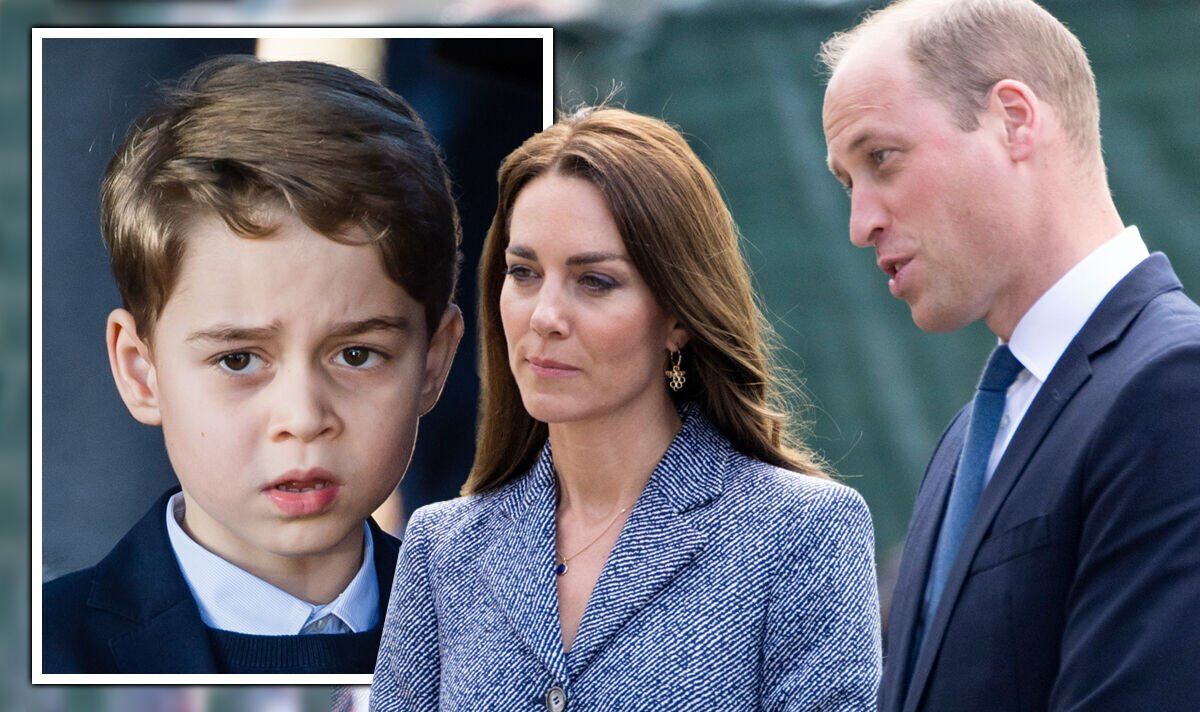 Prince William’s role in the Royal Family has become increasingly visible in recent years as he prepares for his future as the king – a role which, eventually, he will pass to his oldest son, Prince George, eight. On Tuesday, the Duke of Cambridge, 39, carried out a historic role on behalf of the Queen for the first time. As Colonel of the Irish Guards, William presented new colours to the military unit ahead of their role in Her Majesty’s official birthday parade — Trooping the Colour — next month.

Prince Charles and William’s ramped up responsibilities give insight into the future of the monarchy, when Charles will be king and William will take on his father’s title of ‘Prince of Wales’.

Both the father and son have spent decades preparing for their royal roles. While Charles is the longest-serving Prince of Wales, William has been groomed for his kingly destiny since childhood.

But according to one royal author, William desires a different introduction to duty for his eldest son, Prince George, who is also destined to become king one day.

In the updated version of his book ‘Battle of Brothers’, Robert Lacey claimed that George would have only been told about his royal destiny when he was seven-years-old.

Kate and William spoke to George about his kingly destiny. (Image: Getty Images)

The Cambridges wanted to be honest with their eldest son. (Image: Getty Images)

He claimed William and his wife, Kate, Duchess of Cambridge wanted to tell their son the truth to prevent him from finding out accidentally.

Mr Lacey wrote: “William has not revealed to the world how and when he broke the big news to his son.

“Maybe one day George will tell us the story himself. But sometime around the boy’s seventh birthday in the summer of 2020 it is thought that his parents went into more detail about what the little prince’s life of future royal ‘service and duty’ would particularly involve.”

Lacey continued that William and Kate wanted to sit George down at a “controlled moment of their choice” at the age of seven.

Their decision linked to William’s unhappiness over the haphazard fashion in which he was told. (Image: Getty Images)

Their decision was said to link to “William’s unhappiness at the haphazard fashion in which the whole business of his royal destiny had buzzed around his head from the start.”

Diana, Princess of Wales wanted to give her children as normal an upbringing as possible, so avoided telling William he would one day inherit the crown.

However, the ruse came undone once William started school and noticed he was treated differently from his classmates.

In his book, ‘William and Catherine: Their Lives, Their Wedding ‘, Andrew Morton claimed that the Duke of Cambridge thought he was just like every other boy who grew up in Britain.

Diana wanted to give her boys as normal life as possible. (Image: Getty Images)

He wrote: “Before William attended school, he genuinely had no idea that he was any different from anyone else.

“His innocence of his position was soon ended by fellow pupils, who left him in no doubt who he was.

“On one occasion a classmate reportedly asked him: ‘Don’t you know the Queen?’

“William looked at him and replied: ‘Don’t you mean Granny?’”

William found out about his royal destiny at school. (Image: Getty Images)

During his time at Eton College, William would spend afternoons at Windsor Castle where the Queen would prepare her grandson for his future as king.

Mr Lacey explained: “There has always been a special closeness between William and the Queen, and she has taken a particular interest in him.

“When William became a teenager, she would have him at Windsor Castle and would open the state boxes and guide him through the papers. It was William’s constitutional education.”

The duke has spoken about the influence his grandmother had over him as he grew up.

William has praised the Queen for her influence on his childhood. (Image: Getty Images)

In an interview with Sky News in 2016 ahead of The Queen’s 90th birthday, he said: “It’s been particularly important to me that I’ve had somebody like the Queen to look up to and who’s been there and who has understood some of the more complex issues when you lose a loved one.

“So she’s been incredibly supportive and I’ve really appreciated her guidance.”

‘Battle of Brothers’ was written by Robert Lacey and published by HarperCollins. It is available here.