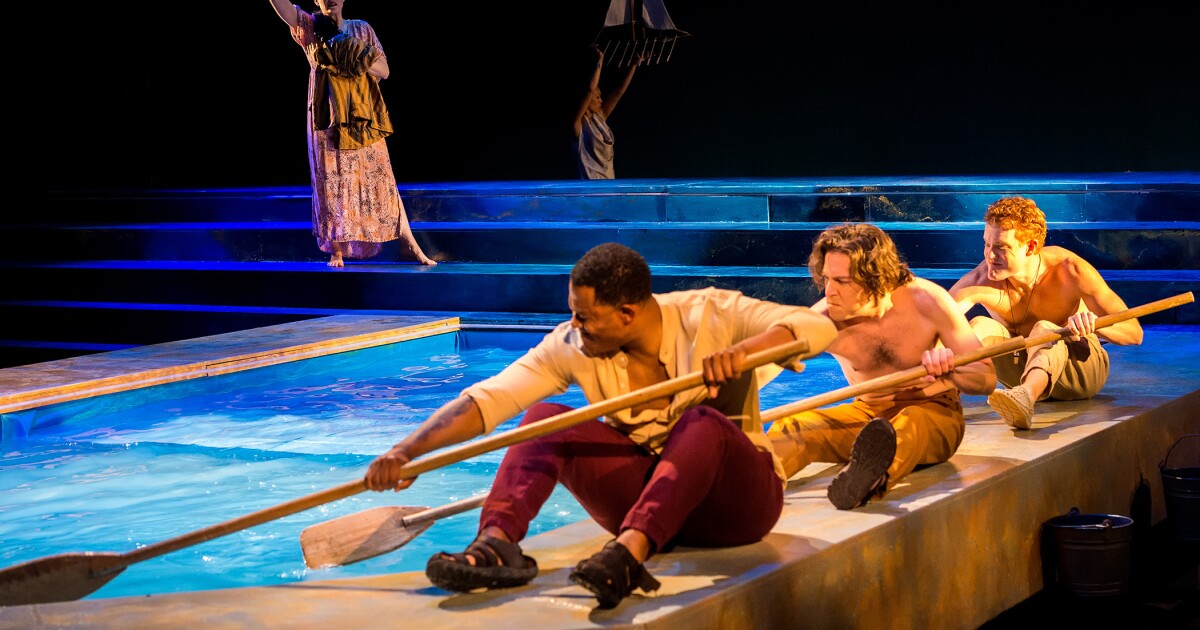 Resident actors at A Noise Within are making a splash — literally.

The Pasadena-based theater’s latest play, “Metamorphoses,” directed by Julia Rodriguez-Elliot, is set around a 14-inch deep, 580-gallon pool constructed above-stage in a 300-seat auditorium. Originally written in 2002 by playwright and director Mary Zimmerman, who won a Tony Award for directing the play, it’s told in a series of short vignettes that tell the stories of major characters in Greek mythology, including Aphrodite, Midas and Orpheus.

Every aspect of A Noise Within’s rendition of the play — stage lighting, set design, wardrobe design — centers around the main character of the show: the pool.

Rodriguez-Elliot said it took the theater’s production team five months to design and construct the makeshift pool for the production’s run. They came up with an insulated wood frame, lined with pond tarp that they would fill up with water using a garden hose.

Fortunately, production manager Adam Matthew has background in pool service, she says, which was useful when adding some later-realized necessities, like installing water heaters so actors wouldn’t freeze between scenes in and out of the pool.

The pool is managed and treated just like any other. It’s chlorinated, chemically shocked and pH balanced. It occasionally needs to be drained and refilled, Rodriguez-Elliot says, which can take anywhere from four to five hours.

“There’s a lot of layers that go into it, and it impacts everything,” she says.

Costumes had to be made from synthetic fabrics, like polyester, so they wouldn’t absorb extra water and bog down performers — but also be dry by the next day’s show. Anti-slip grip flooring had to be placed around the pool to prevent actors from slipping.

To help the actors prepare for their roles while construction was underway, the production team arranged wrestling mats in a rehearsal studio into the general shape and size of the would-be pool, says Erika Soto, who plays Eurydice and other characters in “Metamorphoses.”

“They had a little mock setup for us to work on, but of course as soon as you get in the water, it changes everything,” Soto says.

Soto and her fellow actors had a week to rehearse in the newly finished pool before previews for the play began last week, she says. They went through multiple variations of rehearsals and ran through scenes before and after water was added to ensure the actors’ safety.

Kasey Mahaffy, another actor in the play, says the transition from sweaty wrestling mats to a pool filled with water felt like a dramatic change. “The water changes how you move. It provides drag on your feet, so you can’t get to where you’re going as fast…. It bounces sound,” he says.

The element of water is crucial to the storyline, Mahaffy says, because it amplifies the message of change and transformation throughout the play. The water often signifies a passage between life and death for characters, and serves as many different sets in the story, from a shoreline, to a bedroom, to a lake.

“The water is an amazing partner in this. It’s sensual. It’s mystical. It’s intimidating. It nourishes and cleanses. It’s so central to these stories,” Rodriguez-Elliot says. “It presents incredible artistic opportunities.”