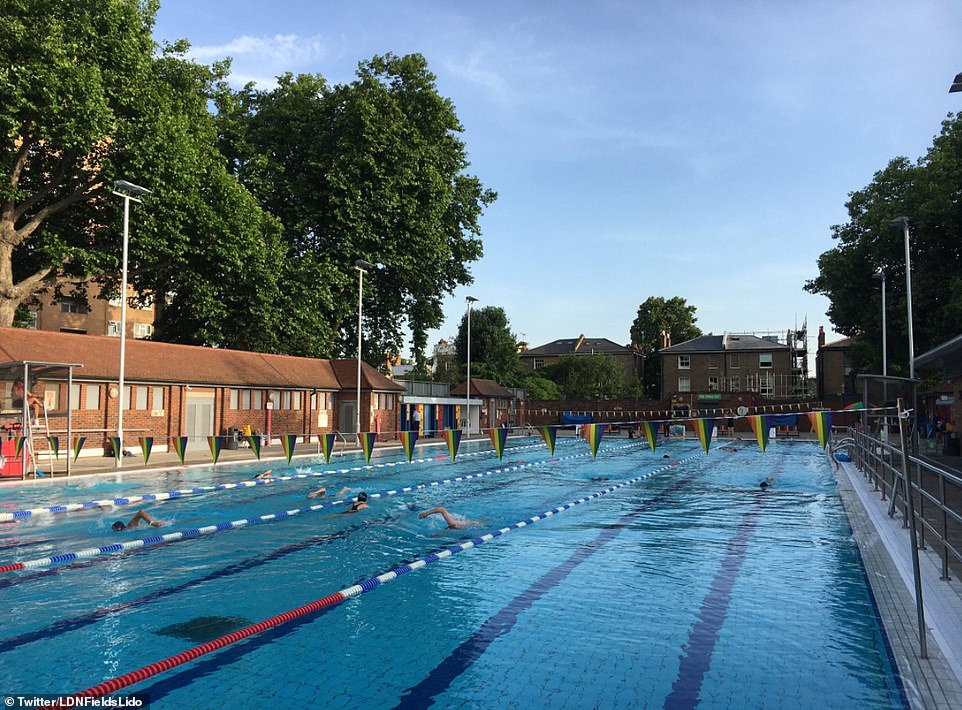 Sunseekers prepared to flock to beaches and parks today as Britain records its hottest day of the year for the third day in a row with temperatures soaring to 34C (93F) – and it could even be the warmest June day on record.

The hottest weather will be around London, after the warmest day of 2022 so far yesterday with 29.5C (85F) at Northolt in the capital, which itself beat the previous high of 28.2C (82.7F) set at Kew Gardens on Wednesday.

Temperatures are forecast to climb further today as a heatwave coming up from Spain and Portugal sees the South East hit 34C (93F), while the rest of England and Wales can expect between 27C (81F) and 30C (86F).

It means parts of the UK will be hotter than Jamaica and the Maldives – but people in Northern Ireland, North West England and Scotland were warned to brace for cooler weather and rain. In fact, heavy rain and strong winds were so fierce north of the border that Network Rail imposed a speed restriction on the West Highland Line today.

There are also hopes of a glorious Saturday for many parts of the UK – with temperatures set to hit 26C (79F) in the South East tomorrow, before dropping significantly to a much cooler high of 21C (70F) by Sunday.

Swimmers make the most of a beautiful morning today at London Fields Lido in Hackney, East London 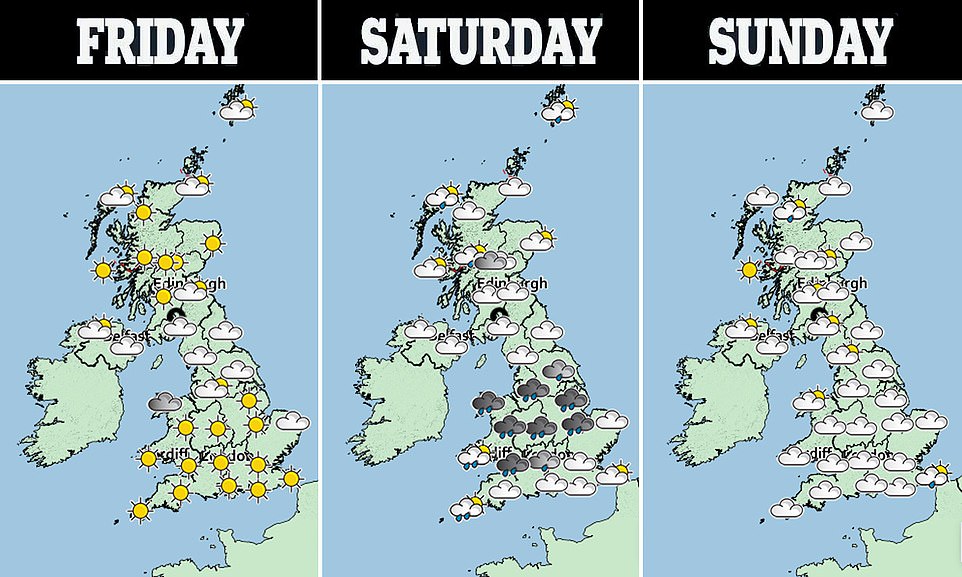 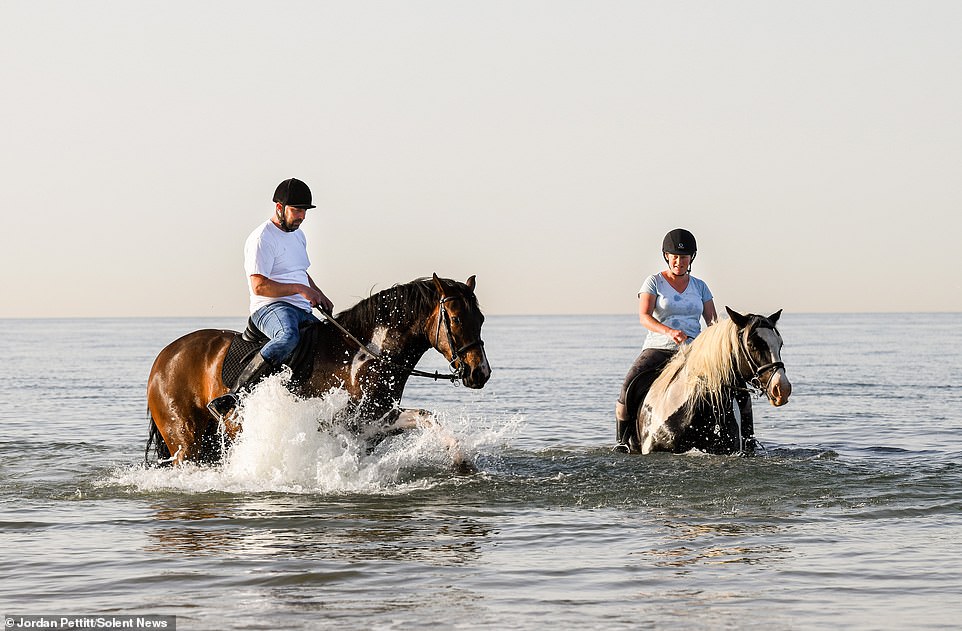 Britons have already been enjoying the warmth this week as plenty spent time outdoors yesterday, although those intending to bask in the balmy temperatures again today have been warned about the ‘serious’ health risks.

Dr Vikki Thompson, climate scientist at the University of Bristol’s Cabot Institute for the Environment, said: ‘Heatwaves are one of the most deadly natural hazards. In the UK, 3,000 deaths were linked to heatwaves in 2021.

Increased risk of fires due to the heatwave, says LFB

Firefighters at the London Fire Brigade (LFB) are warning of an increased risk of fires due to the heatwave.

The LFB said it has already attended more than 1,430 grass and open land fires across the city this year. This includes grassland, canal and riverbank vegetation, scrubland, parks, playgrounds, crops and woodland.

Around 350 of these were in domestic gardens and the LFB said that with prolonged periods of hot weather, there is a concern these numbers will rise. In the last five years, they have attended almost 600 fires involving barbecues, 45 of which were on private balconies.

The LFB’s assistant commissioner for fire safety, Charlie Pugsley, said: ‘We want people to enjoy the glorious weather and do so safely. Barbecuing on dry grass is reckless and can easily cause a really serious fire – damaging the immediate area and risking nearby properties.

‘We’re also urging people to think twice about having barbecues on balconies. It’s easier than you might think for a balcony fire to spread to others, which could not only leave you homeless but displace hundreds of your neighbours too.

‘We’re not trying to take the fun out of the heatwave, but for the sake of our city – and of our firefighters who have to work in sweltering temperatures to tackle these blazes – we’d really like people to take our advice on board. We’re asking the public to remain vigilant and call 999 as soon as they see any signs of smouldering grass.’

Firefighters are also warning residents not to risk their safety for a cooling swim. In the last five years, crews have attended almost 300 reports of a person in water or at immediate risk of entering water. The LFB said there were nine accidental drownings in London last year, making it the joint third highest in the UK.

‘The health issues related to heat include direct effects, such as heat stroke and cardiovascular failure, and indirect effects including poorer mental health and an increase in accidents such as car crashes and drownings.’

Healthcare staff have been told to plan for how the hot weather will affect patients, after a Level Three heat-health alert was issued by the Met Office and the UK Health Security Agency for most of South East.

A Level Two heat-health alert remains in force for southern and central England, while northern England is still under Level One.

The hot weather has been prompted in part by a natural build up of heat in the UK, thanks to clear skies and dry ground conditions. Warmer air from Europe has also been a major factor, leading to a ‘crescendo’ today.

Met Office spokesman Grahame Madge said: ‘We have got warmer air being brought up from further south in Europe where there has been a major heat incident, particularly in Iberia, so that’s leading to the sort of crescendo we will see on Friday.

‘We have got the heat building day by day. We think at the moment, although there is some uncertainty, that the weather temperatures will peak on Friday and then largely we will be in for a cooler day on Saturday.

And Dr Mark McCarthy, head of the Met Office’s National Climate Information Centre, said: ‘Climate change has increased the average temperature of UK summers, and it is also increasing the likelihood of experiencing more extreme temperatures.

‘Reaching 34C during June is a rare, but not unprecedented, event in the historical climate records for the UK. But if it should happen this week it would be notable that it would have occurred on three days during the last six Junes’.

Aidan McGivern, Met Office meteorologist, said the heat will be ‘peaking significantly’ today, when the country will ‘see widely 30C or more, with a maximum, somewhere around London, or to the north of London, 34C’.

He added: ‘Much cooler for Scotland, for Northern Ireland, and for the far North of England as well, and temperatures could be lower than Thursday because of the cold front moving in from the North West.

‘It’s likely to bring a substantial spell of rain [today] for western Scotland in particular, some heavy and persistent rain here, outbreaks of rain also for Northern Ireland and the rest of Scotland, and pushing into northern England. 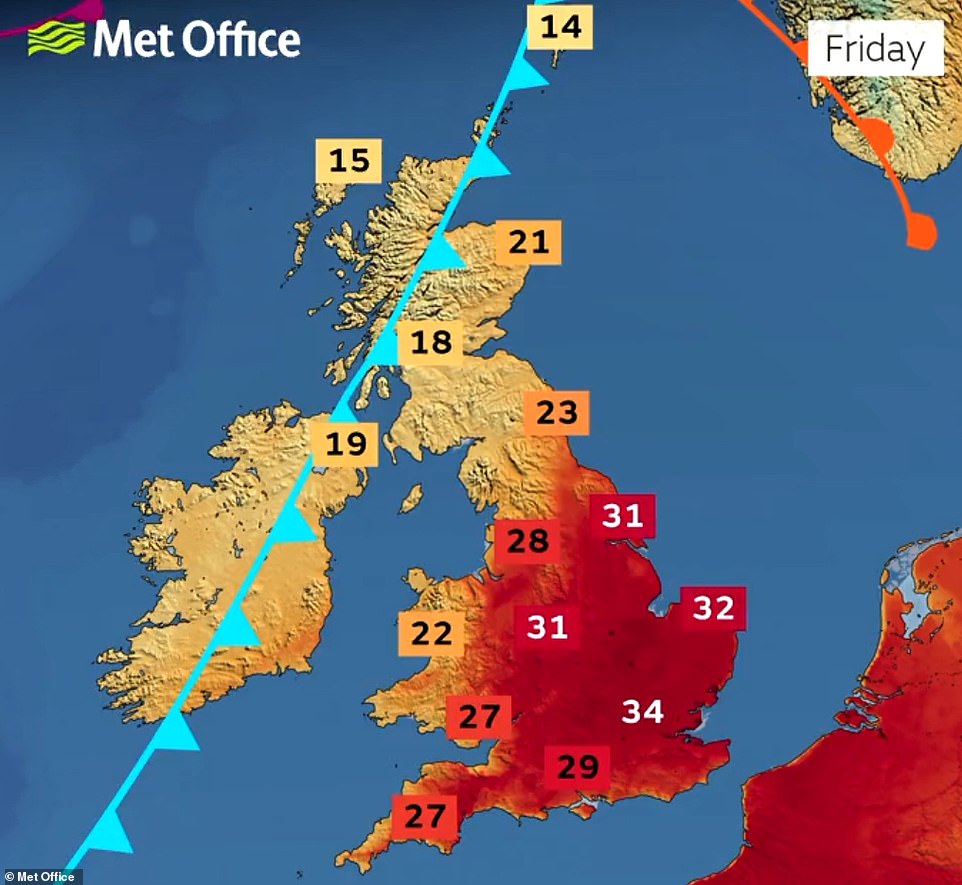 ‘(It will be) fizzling out for a time before an area of low pressure moves up from the South at the start of the weekend and engages with this significant temperature contrast between the hot South and the cooler North West.

‘At the moment it looks in central parts of the UK where we’ll see some heavy rain on Saturday and a significant drop in temperatures. The temperatures do decline through the weekend – a cooling trend, and also we’ll see some substantial wet weather.

‘This low [weather front] will start to increasingly affect the UK from the South West and its West and south-western shores, where we’re most likely to see the heaviest and more persistent rain during Sunday. But it could extend as far as Northern Ireland, southern Scotland and northern England.’

The RSPCA is urging dog owners to be aware of the dangers of walking their pets – especially ones with thick coats and underlying health conditions – during the warmer seasons.

The Blue Cross meanwhile urged cat owners to be careful when leaving windows open after a kitten fell from three storeys and fractured her leg.

Esme Wheeler, RSPCA dog welfare specialist, said: ‘The truth is walking dogs in hot weather can be a silent killer.

‘While the majority would never leave our dogs in a car on a hot day, or even take our dogs for a really long walk in the heat, many people may still be putting their dogs at risk even on a short walk, or taking them to places such as fields and beaches with little or no shade.

‘We have long-campaigned that dogs die in hot cars, but this year we’re highlighting that dogs die on hot walks, too. The message remains very simple – never leave a dog in a hot car because ‘not long’ is too long, and when it comes to walks, ‘if in doubt, don’t go out.”

The Blue Cross said Dory, a 16-week old kitten, was found by her owner after she fell from a window in Pimlico, central London, during a spate of hot weather on May 18.

The kitten was so badly injured she had to have her leg amputated. Dory’s owner placed her in the care of the charity following the incident and the Blue Cross is now hoping to rehome her.

Some advice by the charity to cool pets down includes keeping cats indoors during the hottest points in the day, with windows open that have wire mesh or netting to prevent any injuries, and instead letting them out during the cooler parts of the day. Other tips include giving cooling pads and ice treats to dogs.