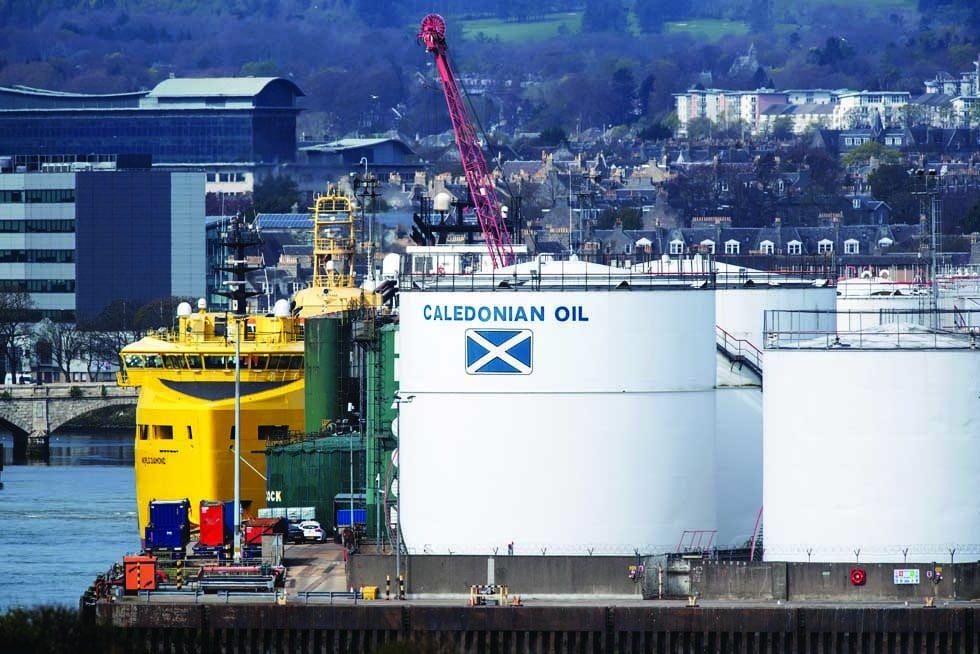 ABERDEEN: In Aberdeen, northeast Scotland, offshore wind turbines, the extension to the city’s port, and hydrogen buses are clear evidence of the move to green energy. But old habits die hard in the Granite City, which was built on the back of profits of oil and gas piped from the often turbulent waters off its shores. Mention the energy transition and the response is of a “renewables boom”, never a decline in the drilling for hydrocarbons. That looks likely to be the case for as long as oil and gas remains in the ageing North Sea fields. Just a few months ago, the UK, which wants to become carbon neutral by 2050, hosted the world at the UN climate change conference COP26 in Glasgow.

Prime Minister Boris Johnson promised to make the country the “Saudi Arabia” of wind power. The price of energy has since taken off, especially after Russia’s invasion of Ukraine, sending bills soaring and leaving many householders struggling to make ends meet. Disruptions in the delivery of Russian gas to places such as Poland and Bulgaria have also seen the security of energy supplies become a top priority. Downing Street has published a new strategy which continues to advocate the development of renewable energies. But it also calls for investment in North Sea oil and gas.

Deirdre Michie, chief executive of lobby group Offshore Energies UK, said the move was welcome and a “positive reinforcement” of the role the sector plays in both energy security and the energy transition. “Even before the energy strategy we absolutely believed that security of energy supply and the energy transition go hand in hand,” she told AFP. John Underhill, a professor in geoscience and energy transition at the University of Aberdeen, is in no doubt there has been a revival of interest in oil and gas-even in fields considered “sub-commercial”.

The Cambo oil field, off Shetland in Scotland’s far north, now looks set to be developed, despite fierce opposition from environmentalists which caused Shell to pull out and work to be suspended. Underhill said people have started to think about where the energy comes from, and about “the role oil and gas plays in the UK and the wider community.” In Aberdeen, local officials are in lockstep with industry. Jenny Laing, who stepped down as leader of Aberdeen City Council last week, said:

“With the local authorities in the last 10 years we’ve invested heavily in renewable energy sources… “But we do that in tandem with making sure we’re supporting the oil and gas sector. We realize people will be relying on fossil fuel for a number of years to come.” For Laing, and for Michie, geopolitical unpredictability means it’s better to rely on oil and gas brought up from beneath British waters than more polluting energy from Russia or elsewhere.

For Aberdeen and the surrounding area, economic expediency trumps everything. Most locals either work in the industry or know someone who does. Britons have abiding memories of the devastating impact of Margaret Thatcher’s abrupt closure of coal mines and steel plants in the 1980s. And while the price of crude has spiraled to more than $100 a barrel since Russia’s invasion, Aberdeen and its environs are still recovering from 2014 when prices went the other way, plunging below $50. Investment in renewables is therefore encouraged but not at the expense of scaring away the oil giants, mainly because they have the capital necessary to finance the energy transition.

“In Aberdeen we’ve had a very buoyant economy due to the oil and gas sector,” said Laing. “We want to make sure that we protect jobs and our local economy.” Many also want the energy transition to be an opportunity to create a more level playing field. Scott Herrett, who works as a “just transition organizer” at Friends of the Earth Scotland, said: “We have vast wealth which gets generated offshore in the North Sea here in Aberdeen and the northeast of Scotland.

“But we still have mass inequality in the city.” Scientists from the UN Intergovernmental Panel on Climate Change in April warned that humans have only three years to radically transform the world economy, weaning it off fossil fuels to avoid catastrophic warming of the planet. Aberdeen is trying to diversify, focusing on health, tourism and life sciences-but it’s not ready yet to do so without the money oil brings. – AFP