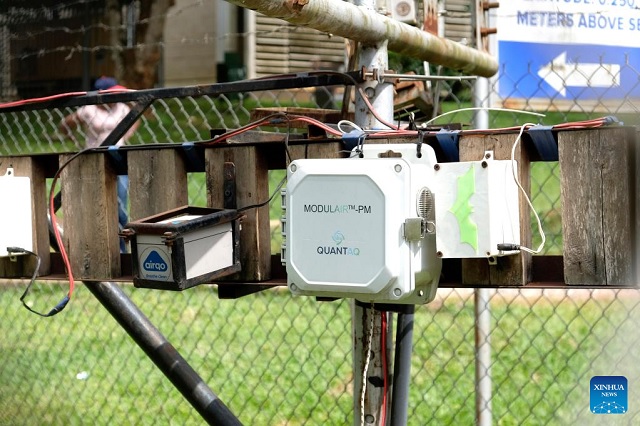 According to the 2021 World Air Quality Report, Uganda’s capital Kampala was ranked among the most polluted cities, with pollution levels exceeding World Health Organization (WHO) cutoffs 5 to 7 times.

With the new innovation of a low cost air quality monitoring system, experts say the real-time data would be used to influence decisions at a personal, local council and at country level regarding policies to be enacted to reduce air pollution.

The system is designed by AirQo, a software company bringing together 15 scientists at the university. It has two components, the hardware and software. The hardware has a palm size metallic box, with air sensors attached. The box is fixed at a desired place, from where it sends data to the cloud through the internet.

The box is connected to the grid in order for it to run and according to Marvin Banda, a systems developer at AirQo, there are plans to connect the boxes to a solar system especially in areas that are not connected to the national power grid.

Banda told Xinhua that the data collected by the device is uploaded onto a cloud system from which a consumer can download real time air quality data of a place of choice using the AirQo application.

“The application can also advise accordingly, for example, if the air quality in a given area is not good, and you have children who are athematic, the application will advise that children stay indoors until the hazardous air is not anymore,” Banda said.

Authorities can also use the air quality information to make informed decisions regarding control of air pollution, according to Banda.

Authorities, for instance in the capital Kampala, have been trained on how to analyze, interpret and understand air quality data thereby taking informed policies and actions, according to AirQo.

Banda said the hardware system has been built to withstand Africa’s harsh weather conditions and therefore the device can be deployed anywhere.

AirQo has so far installed 120 monitors across the country with the support of partners and the local authorities.

Banda said although AirQo has not gone commercial, the locally developed monitoring system is about eight times less costly than the imported one.

He said through support from partners, there are plans to expand the monitoring system to other parts of Africa, with the Kenyan capital Nairobi being the first.

Besides using smart air quality monitors to quantify the magnitude and scale of air pollution across the country, authorities in Uganda carryout outreaches to educate the public on the effects of pollution and how they can help to protect the environment.