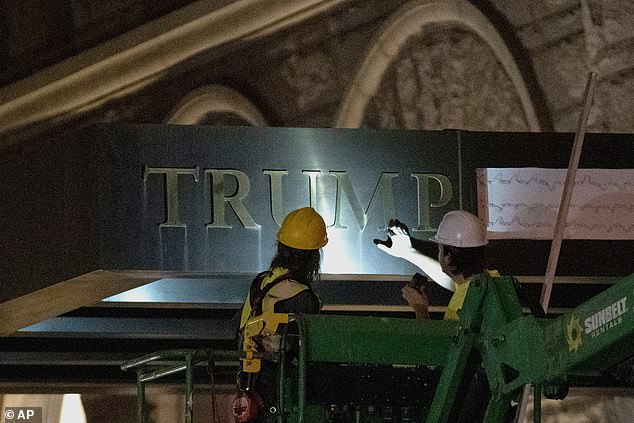 DC says goodbye to Trump hotel: The former president’s name is officially removed from the Old Post Office building after losing $70M over four years and Waldorf Astoria prepares to move in

Workers removed the ‘TRUMP’ lettering from the former president’s hotel in Washington D.C. on Wednesday evening as the sale to Hilton Worldwide Holdings Inc. is finalized and the federally owned old Post Office building will become a Waldorf Astoria.

The Trump International Hotel was officially shuttered this week after the Trump Organization reached a $375 million agreement to sell the D.C. property to a Miami-based investor CGI Merchant Group.

The deal reached with CGI represents a 25 percent discount from the $500 million the Trump Organization previously sought in 2019 for sale of the property’s lease.

Hours after the deal officially closed Wednesday, workers descended on the Pennsylvania Avenue location and began taking down signs from the facade of the building.

Trump initially boasted that the hotel netted more than $150 million during his presidency, but the Democrat-run House Committee on Oversight and Reform said in October that he actually lost more than $70 million on the hotel during that time – even though the location was a popular spot for lobbyists and right-wing pundits to stay. 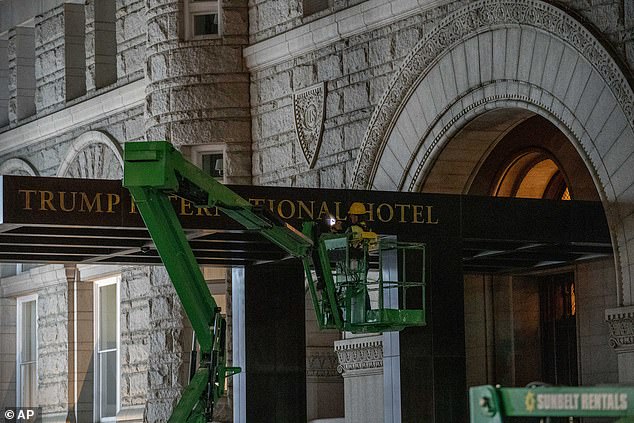 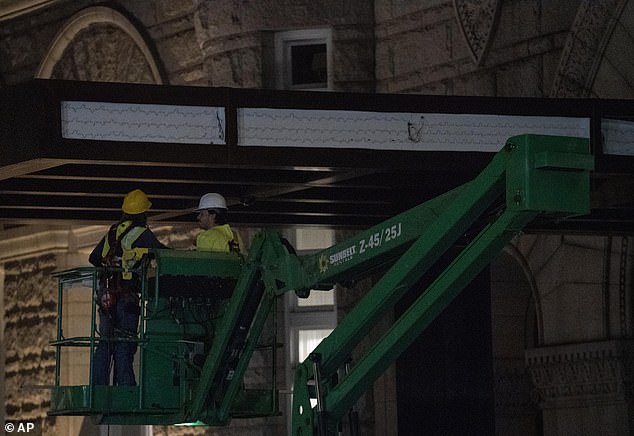 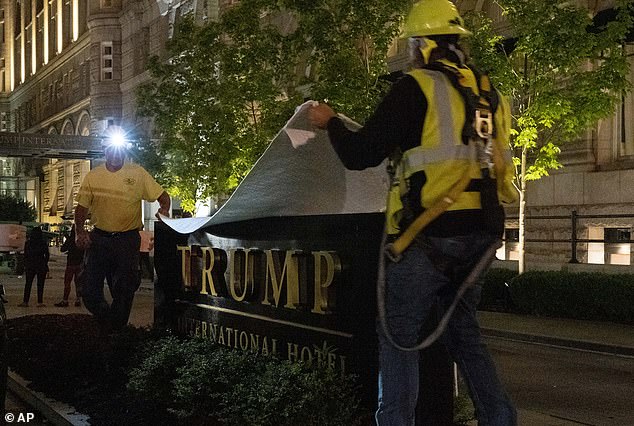 Workers cover the signage for Trump International Hotel before removing it on Wednesday, May 11, 2022 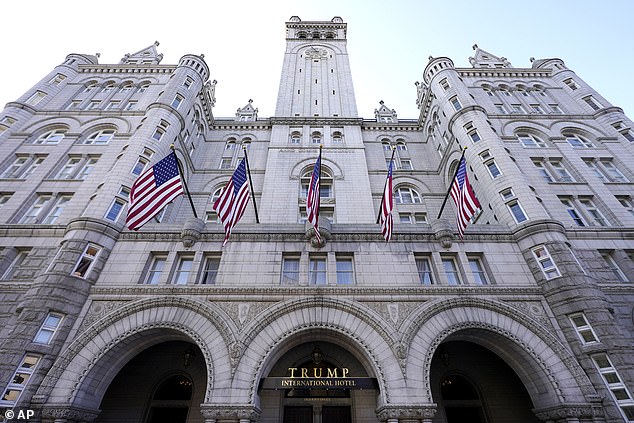 The Old Post Office and Clock Tower, owned and leased out by the federal government, will now be relaunched as Hilton’s luxury brand Waldorf Astoria Hotels & Resorts and attempt to break away the historic building’ association with Trump.

‘We took a dilapidated and underutilized government building and transformed it into one of the most iconic hotels in the world,’ the former president’s middle son Eric Trump told NBC News in a statement. ‘We are incredibly proud of what we accomplished.’

Trump’s hotel in the nation’s capital has been the center of ethics scrutiny and scandals during his time as president, with lawsuits claiming he used the property for government events to enrich his family’s business. 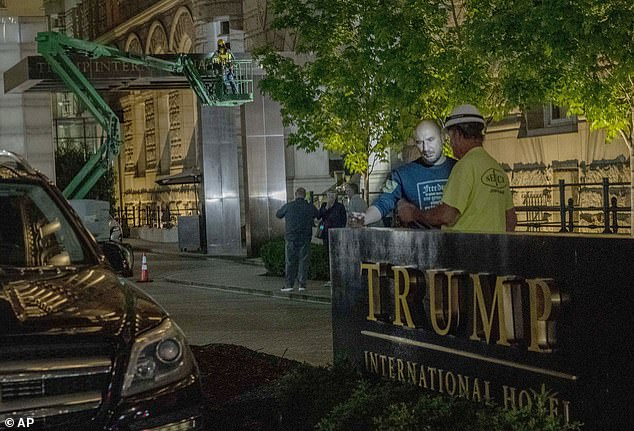 The Trump lettering will no longer appear on the Pennsylvania Avenue hotel, which was converted from the Old Post Office building and is leased out by the federal government 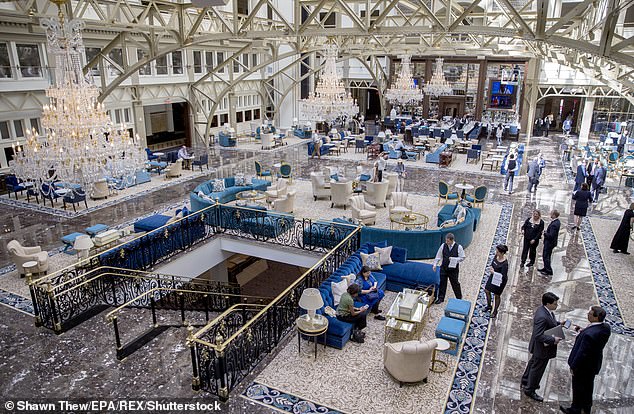 The Benjamin Bar, with its iconic blue and gold design, was a popular watering hole for Republican politicians and lobbyists during Trump’s presidency

In January 2020, D.C. Attorney General Karl Racine filed a lawsuit against then-President Trump’s inaugural committee and business and claimed it had ‘abandoned’ its purpose as a nonprofit by overpaying to book event space at Trump International Hotel.

The Trump Organization responded at the time with: ‘The AG’s claims are false, intentionally misleading and riddled with inaccuracies.’

‘The rates charged by the hotel were completely in line with what anyone else would have been charged for an unprecedented event of this enormous magnitude and were reflective of the fact that hotel had just recently opened, possessed superior facilities and was centrally located on Pennsylvania Avenue,’ the statement added. 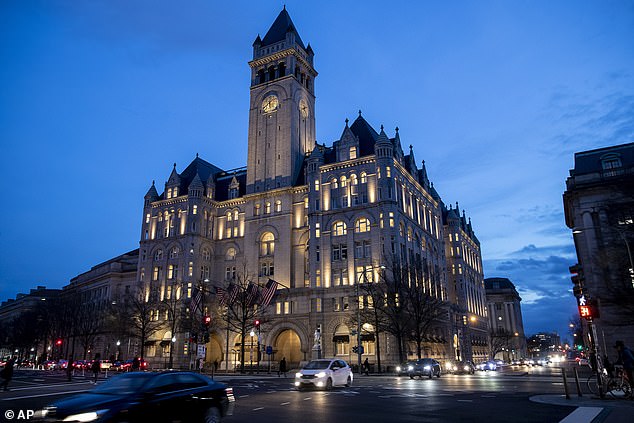 Trump Organization, which was run by Trump’s kids while he was president, sold the hotel to Miami-based investor CGI Merchant Group for a 25% discount of the $500 million they were seeking from a 2019 sale

‘The AG’s after the fact attempt to regulate what discounts it believes the hotel should have provided as well as the timing of this complaint reeks of politics and is a clear PR stunt.’

The iconic Benjamin Bar also became a popular watering hole for White House and Republican Capitol Hill workers, as well as other Trump allies, during his administration.

Over the last few months the hotel had a much less ‘open door’ policy, with individuals needing reservations to even get through the alleyway to enter the bar and restaurant area.