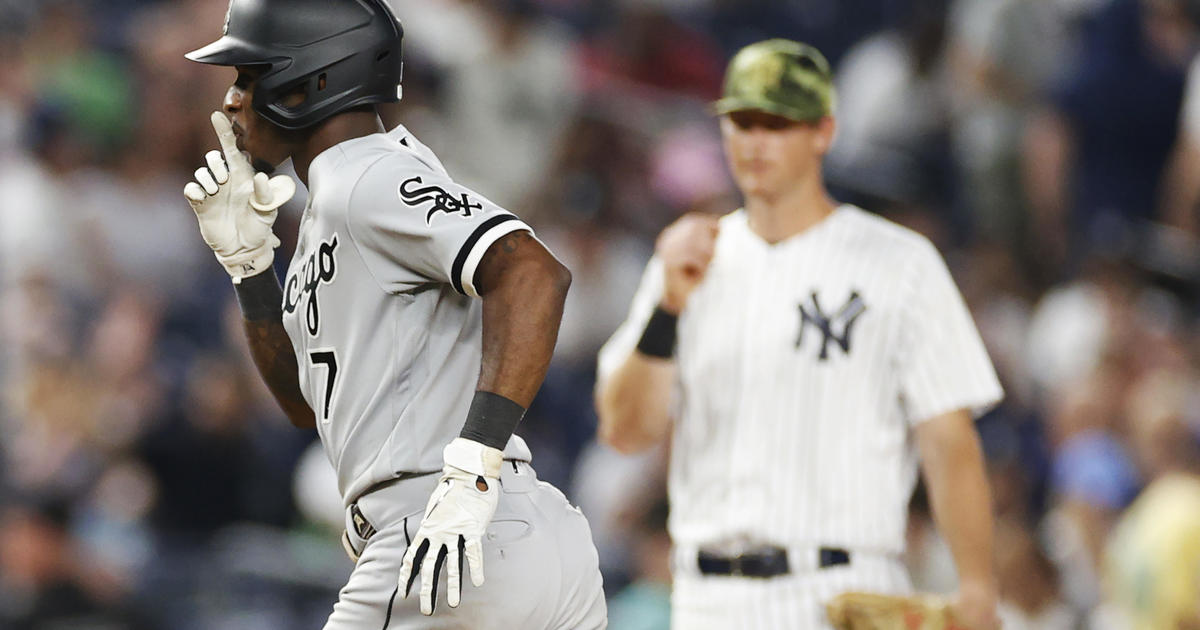 NEW YORK (CBS/AP) — Tim Anderson hit a three-run homer and then put a finger to his lips to silence fans booing and chanting “Jackie” at him, capping a tumultuous weekend at Yankee Stadium and helping the Chicago White Sox beat New York 5-0 Sunday night for a doubleheader sweep.

A day after Anderson, who is Black, accused Yankees slugger Josh Donaldson, who is white, of making a racist remark by calling him Jackie Robinson, the All-Star shortstop didn’t play in the first game. AJ Pollock hit a tiebreaking homer off Aroldis Chapman in the ninth inning as the White Sox won 3-1.

Anderson was jeered during pregame introductions and prior to each at-bat in the nightcap. He had already hit two singles when he homered over the right field wall with two outs in the eighth.

Anderson took a slow trot and put his hands to his lips in a shushing gesture as he rounded the bases. He clapped his hands several times upon crossing home plate and pointed skyward before again making a silencing motion.

After the game, Anderson declined all interview requests.

Donaldson also did not speak to reporters. Through a Yankees spokesman, Donaldson said he had not talked to Major League Baseball about the situation and didn’t talk speak to Anderson on Sunday.

There didn’t appear to be any carryover on the field in either game from the previous afternoon’s anger and tension when the benches and bullpens emptied. Donaldson acknowledged Saturday he called Anderson “Jackie” — a reference to the pioneering baseball icon that elicited criticism from both managers.

Donaldson said it was part of an inside joke with Anderson. MLB is investigating the incident.

Before the five-run eighth, the story of the second game was Kopech, who retired the first 17 batters he faced on just 60 pitches before Rob Brantly doubled.

Kopech (1-1) allowed just the one hit and two walks while striking out six over seven innings.

Donaldson sat out the finale after going 0 for 4 but coming within a few feet of a much bigger day in the opener. With two on and two outs in the first, Donaldson lined out to third base, where Yoan Moncada — inserted into the lineup in place of Anderson — saved a run by snaring the ball at his shoetops. In the fourth, Donaldson flied out to the wall in left field.

With two on and one out in the eighth, he flied out to the track in right-center.

White Sox catcher Yasmani Grandal, who confronted Donaldson on Saturday, went out to talk to reliever Kendall Graveman as the Yankees third baseman approached the batter’s box. Donaldson stepped back out of the box as Grandal returned to the plate.

La Russa said Donaldson’s comment was “racist” following Saturday’s game, a 7-5 Yankees win. New York manager Aaron Boone said Sunday he believed Donaldson didn’t mean any harm with his words, but thought using such a term was “somewhere he should not be going.”

Aaron Judge’s eighth-inning homer off Graveman cost Johnny Cueto a win in the opener. The resurgent 36-year-old righty allowed six hits, walked two and struck out five in his second major league outing of the season.

Liam Hendriks, who used an expletive earlier Sunday to describe how he didn’t believe Donaldson’s explanation that he made the “Jackie” reference as part of an inside joke with Anderson, struck out two in a perfect ninth to preserve the win for Graveman (1-1).

Hendriks pumped his fist and yelled loud enough to be heard three levels away after whiffing Jose Trevino for his 13th save.

Yankees starter Jameson Taillon allowed one run on five hits and one walk with seven strikeouts in a season-high seven innings. Chapman (0-2) took the loss.

WILL DONALDSON FACE PUNISHMENT FOR HIS REMARKS?

CBS 2’s Marshall Harris caught up with Bally Sports MLB Insider Russell Dorsey, who said he thinks Donaldson should face repercussions for what he said to Anderson – but it’s not clear yet whether he will.

“We’ll see. I think this is one of those things where we live in a world – and Marshall, you know this as an African American reporter – microaggressions. And calling somebody Jackie, as in Jackie Robinson, is a microaggression – whether Josh Donaldson thought that was OK or not. You cannot call an African American player Jackie. One, especially because the big thing, ‘Oh, he’s called him that in the past,’ as if that was OK. Two, you don’t have inside jokes with people you don’t like. Tim Anderson does not like Josh Donaldson – has not liked Josh Donaldson,” Dorsey said. “So it’s a situation that I’m not surprised by. People would think that the day and age we live in, players should know better; do know better – but they don’t. And it’s one of those things where, you know, everybody wears Jackie Robinson’s number in April, but at the same time, now we’re making a mockery of his legacy, so the whole situation is sad. Good on Yasmani Grandal for standing up for his guy in Tim Anderson – so I think that’s big. Now we’ll just see what the league does.”

Moncada, who was inserted into the lineup into the leadoff spot when Anderson was scratched, recorded a bunt double for the White Sox’s first hit with two outs in the third inning. The bunt skated along the third base line as Taillon and Donaldson watched, but it remained fair well beyond the bag. Moncada has just three sacrifices in his seven-year career, none since 2019.

White Sox: LHP Aaron Bummer (right knee strain) was activated from the 15-day injured list and served as the 27th man for the doubleheader. . Cueto got dizzy in the sixth inning and received a pair of drinks — one water, one a sports drink — from a trainer. He spent the time between games getting hydrated. . Graveman also received a visit from the trainer after feeling fatigued in the eighth but was able to complete the inning.

Yankees: RHP Chad Green (elbow), long one of the Yankees’ top setup men, will undergo Tommy John surgery. Green was hurt while pitching against Baltimore on Thursday night. He has a 3.17 ERA, 11 saves and 494 strikeouts in 383 2/3 innings for the Yankees since 2016. . OF Joey Gallo and C Kyle Higashioka were each placed on the COVID-19 IL. Boone said neither player has tested positive but both are showing symptoms of the coronavirus. Neither player attended Saturday night’s annual Welcome Home Dinner.

White Sox: After an off-day Monday, RHP Dylan Cease (4-1, 3.09 ERA) is slated to start against the Boston Red Sox as the White Sox begin a five-game homestand.

Yankees: RHP Gerrit Cole (4-0, 2.89 ERA) takes the mound Monday in the opener of a three-game series against the visiting Baltimore Orioles.