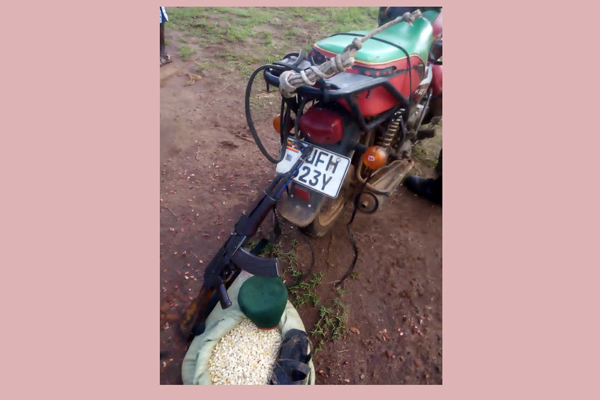 Security operatives in Karenga District have launched a manhunt for 3 individuals who allegedly deserted a gun and a motorbike they have been travelling on at a police checkpoint and fled.

He mentioned when the suspects reached on the checkpoint mounted by the Anti-Stock Theft Unit (ASTU) personnel in Kapedo, they deserted the bike and a sack of maize during which that they had stashed the gun.

“When these criminals realised that police had sensed something, they all took off, abandoning their motorcycle and a bag of maize,”he mentioned.

Mr Longole added that when the police opened the sack they recovered SMG riffle UG 0112.

He mentioned safety operatives within the sub area are monitoring the suspects whereas the bike is in police custody.

Mark Icumar, one of many residents expressed concern of what he described as excessive price at which suspected cattle rustlers are buying weapons regardless of heavy deployment of the military and cops.

According to him, some residents are mentioned to be buying loans from group financial savings to purchase weapons, a declare this publication may not independently confirm.

“Most people, including those who claim to have stopped rustling cattle are running for the guns because of the harsh living conditions; no jobs, no food for families…”he mentioned.

Karamoja — a sparsely populated and underdeveloped area — has been wracked for many years by insecurity attributable to tit-for-tat armed cattle raids between clans.

With a porous border and thriving illicit commerce, the Karimojong nomadic communities have staged a number of often-fatal highway ambushes and robberies within the lawless area.

The authorities has up to now carried out a number of safety operations to retrieve unlawful firearms from the group.

Some 170 unlawful weapons and greater than 15,000 stolen cattle have been recovered since July final yr, in accordance with authorities figures.

At least 251 suspected cattle rustlers have been killed final yr within the sub-region by a joint power of police and the military, with most deaths attributed to forceful disarmament operations.