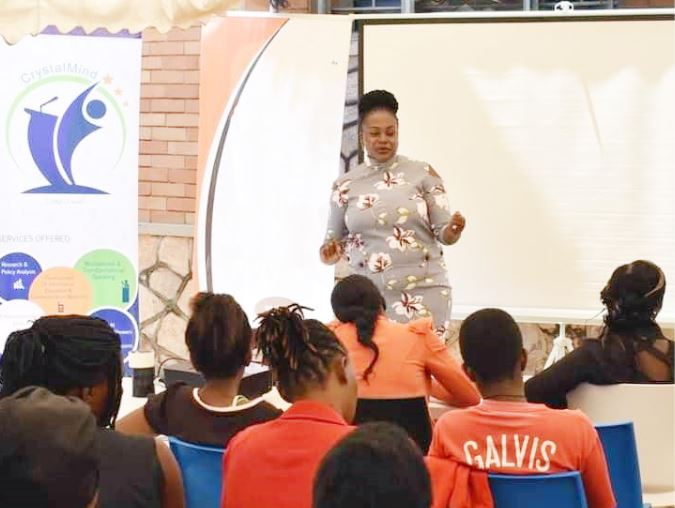 However, what stands out for her is that she dedicates a great deal of her time doing human rights education work/trainings for all persons without discrimination through motivation sessions. She works a lot with sexual minorities, a group classified as the Lesbian, Gay, Bisexual, Transgender and Intersex (LGBTI).

This has earned her praise and scorn in equal measure as Ernest Jjingo found out during a visit at one of the trainings she was conducting at Sexual Minorities Uganda at Ntinda, Kigowa. Nalubega is determined to sensitize the public about respecting the human rights of all persons irrespective of their sexuality orientation.

Nalubega comes off with a lot of charm; this is what make her relatable, approachable and gives her the ability to keep her audience glued to what she is speaking about. It is impossible to lose attention when she is speaking. On this afternoon, I found her in the middle of a training session with a group of youths.

She was sensitizing them about Article 21 of the Constitution of the Republic of Uganda “the Right to Equality and Non-discrimination.”

Her emphasis was on inclusiveness of the sexual minorities in regard to accessing social services and job opportunities, among other things.

“I enjoy these sessions and I feel satisfaction when I explain human rights concepts, rights and duties of all persons and then finally positively impact my mentees, audiences and the public in general,” she says.

What is and was compelling although hard to realise is that most of the people she works with are sexual minorities. When asked about how she identifies them, she replied “Most of them are sent to me or recommended by people I have worked with before in the human rights and advocacy spaces.”

It is somehow a brave move for her to be working with LGBTI because of the homophobic nature of the Ugandan society which is neither helped by the missing legal framework on sexual minorities in Uganda.

However, Nalubega does not claim any credit for bravery in the decision to work with sexual minorities, which she took on about four years ago.

For Nalubega, who is also a motivational speaker, there was never an opportunity she turned down when it comes to working with the minorities.

“I have worked with all sorts of people but it didn’t ever occur to me that this group needs serious mentoring, mental and legal support until a teenager confessed to me how he was on the verge of suicide because his family had abandoned him for being a gay,” she recalls.

“I took him under my wings, referred him for help which changed the mindset of viewing himself as an outcast. I advised him that the right to life is a gift from God that no one or situation should snatch away.”

It is from then on that she decided to seek out sexual minorities who are silently suffering because of their sexual orientation.

“Some of them even fear to approach doctors when they are sick because of the stigma,” she says.

“I help bridge that gap and I always tell people not to judge them.”

They should equally enjoy the right to health, education, life and even freedom from torture, inhuman and degrading treatment”. She explained that many of them get incarcerated even without a fair hearing.

THE PAIN AND BACKLASH

Nalubega says to her surprise, since her assignment as a focal point person for a Regional Sexual Orientation and Gender Identity and Expressions (SOGIE) Project at the Uganda Human Rights Commission in 2017, and her continuous work with projects like the Community Led Monitoring Project in 2021 under HEPs Uganda, ICWEA and SMUG, mentoring and advocacy for equal rights of all persons irrespective of sexuality, some people think she subscribes to the LGBTI and is also one of them.

“It is critical to note that LGBTI persons are full human beings like the rest of you. You need to understand that you do not have to first fall sick to advocate for the right to health, or imprisoned to fight for the respect for the right of prisoners.

Likewise, as a human rights educationist, a mother, sister and friend, I see the abuse of the rights of the LGBTI persons and
I speak out on it. Why deny someone medicine when they are suffering from malaria just because they are gay? Let us treat people respectfully and respect their rights” she explained.

However, not everyone is impressed with the work Nalubega does with the sexual minorities. She admits that many family members, colleagues and friends have distanced themselves from her.

Meanwhile, she has also encountered some threats to her life; abuse and violation from unknown people, all which she attributes to her work with the sexual minorities. Nalubega disclosed persons who pierced her car tyres as she was in a training one morning December in 2021, another incident was when she was attacked by unknown people who threatened to rape her if she continued advocating for “silly equality and non-discrimination of the LGBTI persons.”

She told me that she had received threats via her mobile phone hence changing mobile lines to deter easy access to her. They have threatened her by telling her “we know where your children go to school; we shall spoil them also”.

She intimated that she feels insecure and her life being threatened. She reported these incidents to the police although her cases were not registered as the police told her she needed to present the identities of those who attacked her and at least telephone numbers of the people who had been calling.

This became difficult for her too because the people that were calling her used anonymous numbers and when she was attacked, she couldn’t make out the faces of the attackers since it was at night and she had locked herself in the car.

When asked whether it is okay continuing with her work, her response was “I am genuinely comfortable with working with all persons without discrimination; man, woman, persons with disability and or even people from the LGBTI community. I am a really warm and open-minded person, and I am not furious with anyone in spite of the social prejudice being clumped on me. I now, more than ever, understand the plight of sexual minorities because I am going through the same.”

Nalubega also feels she is discriminated against by some people hence this is affecting her right to work.

“For some reason, I no longer get invited to speaking events or even family and friends’ get-togethers because some people think I’m twisted,” she said.

Some people have accused her of trying to ‘spoil’ society by sensitizing the public on equality and non-discrimination of all persons. They allege that she is a recruiting agent for the LGBTI community. “I find this ridiculous and unfair but it doesn’t bother me because I know the position from which I sensitize the public. LGBTI persons are human beings too,” she stressed.

Nonetheless, Nalubega remains undeterred in her work with sexual minorities. She encourages society to view and treat everybody with equal dignity, love and respect. She concluded with a quote by Evelyn Beatrice Hall: “I disapprove of what you say, but I will defend to the death your right to say it.”