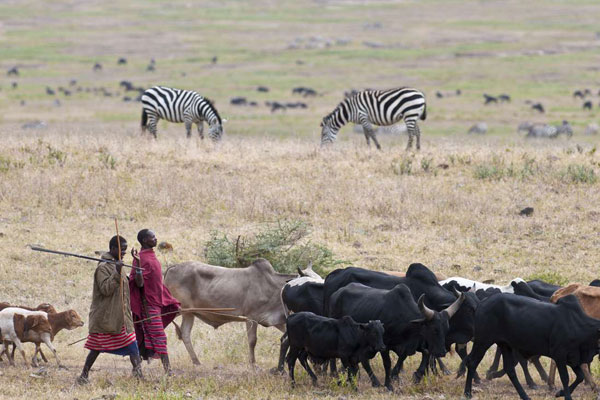 Tanzania on Thursday began relocating Maasai pastoralists from the famed Ngorongoro conservation area in a move that rights campaigners described as unlawful evictions.

The indigenous community has lived in the reserve, a Unesco World Heritage site in northern Tanzania, for over a century. But they now face the threat of eviction, as the authorities contend that their growing population is encroaching on wildlife habitat.

Officials insist the relocation is voluntary.

Arusha regional commissioner John Mongella said around 296 families had registered for the move to Handeni, in Tanga, a district 600 kilometres south of Ngorongoro.

“There is no eviction here, all people who are leaving (are) voluntarily registered and the government is facilitating them,” he said in a video statement.

The government has earmarked 162,000 hectares (400,000 acres) of land for relocated Maasai households, he said. But the community remains sharply divided over the issue, with many reluctant to leave the only home they have ever known.

The relocation has sparked concern, with a team of UN-appointed independent rights experts warning that “it could jeopardise the Maasai’s physical and cultural survival.”

“This will cause irreparable harm, and could amount to dispossession, forced eviction and arbitrary displacement prohibited under international law,” they said in a statement on Wednesday.

Tanzania has historically allowed indigenous communities such as the Maasai to live within some national parks. But since 1959, the number of humans living in Ngorongoro has shot up from 8,000 to more than 100,000.

The livestock population has grown even more quickly, from around 260,000 in 2017 to over one million today.

The Maasai say the authorities are attempting to force them off their land in order to organise safaris and private hunting expeditions for tourists. The government has rejected these accusations, but the issue has led to clashes between the pastoralists and police.

One officer was killed and several protesters were injured during demonstrations in Ngorongoro district’s Loliondo town last weekend, sparking outrage among campaigners.

The protest broke out over the government’s push to cordon off 1,500 square kilometres (550 square miles) of Loliondo to create a wildlife protection area.

On Wednesday, Home Affairs Minister Hamad Masauni ordered police to carry out “verification and investigation of all NGOs operating” in Loliondo, warning that “their operations should not disturb national security in any way.”

“The government will take strong action against all the NGOs which violate the rules,” he warned.

Amnesty International said Wednesday the “unlawful forced eviction” in Loliondo was “shocking both in its scale and brutality.”

“Authorities must halt the ongoing demarcation and security operation in Loliondo, and begin genuine consultations with the community,” it said.

In 2009, thousands of Maasai families were moved from Loliondo to allow an Emirati safari company, Ortelo Business Corporation, to organise hunting expeditions there. The government cancelled that deal in 2017, following allegations of corruption.