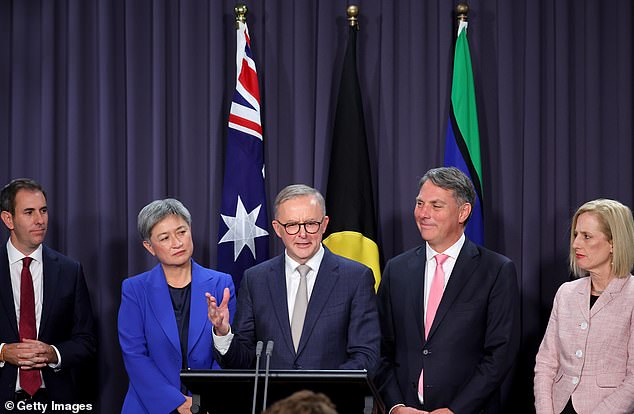 Prior to his first address to the nation since being sworn in on Monday, Mr Albanese’s staff replaced  two of the three Australian flags behind the podium at Parliament House to the Aboriginal and Torres Strait Islander flags, with the Aboriginal flag placed in the centre.

Mr Albanese didn’t make any announcement about the move to change the flags on the podium before holding the presser.

The decision to display the Aboriginal and Torres Strait Islander flags has been described as a ‘monumental’ step forward for race relations in Australia.

Australian of the Year Grace Tame tweeted a photo of the backdrop along with the caption: ‘Always was, always will be,’ a powerful statement that implies Australian land is Aboriginal and always will be.

Many other Australians applauded the move.

‘Seeing the Aboriginal flag and Torres Strait islander flag behind PM Albanese made me cry,’ one wrote.

Another said: ‘Incredible to see all 3 flags at the first press conference, with the Aboriginal flag in the centre!’

‘An important symbol – the Aboriginal flag is front and centre and hopefully a sincere acknowledgment of the traditional owners, the heart of this land,’ one Aussie wrote. 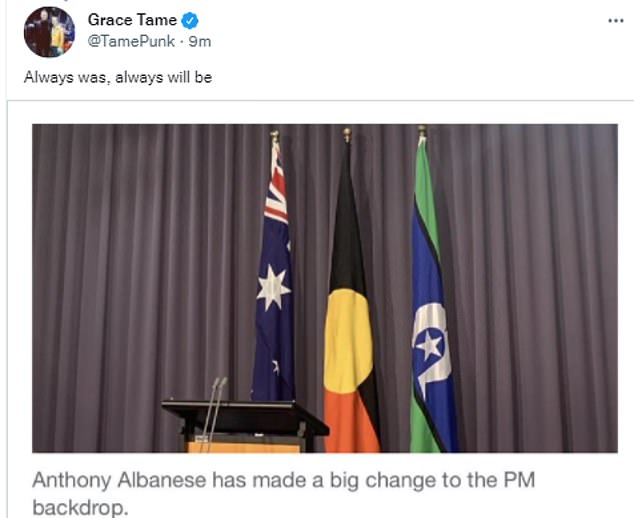 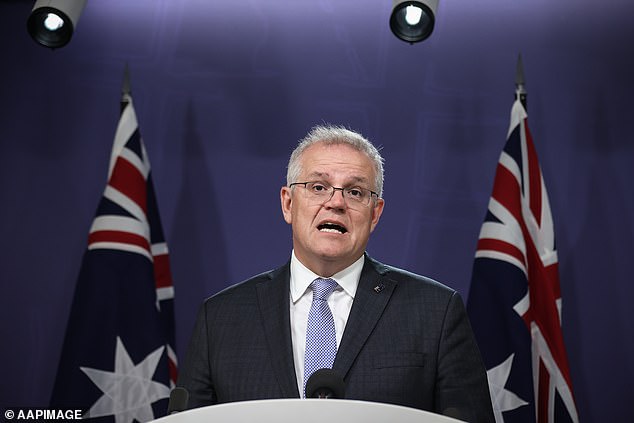 Former Prime Minister Scott Morrison held his press conferences in front of the Australian flag, without the Aboriginal or Torres Strait Islander flags in the backdrop 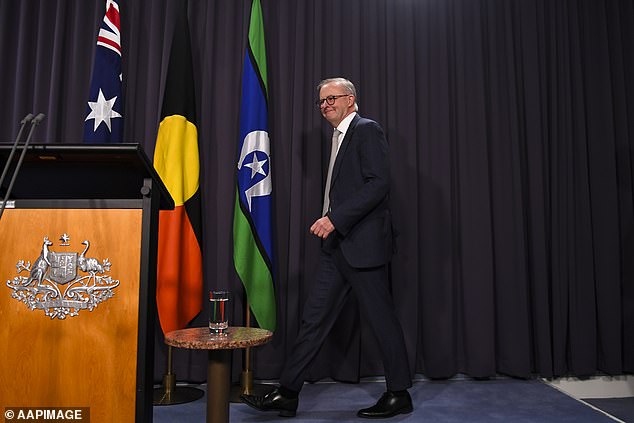 The monumental change comes after Labor announced it had taken a step forward to ‘fulfilling the promise of the Uluru Statement from the Heart’.

The Uluru Statement proposes introducing an Aboriginal Voice to Parliament into the Australian constitution, and the ALP has pledged to implement it in full.

The Uluru Statement from the Heart was constructed in 2017 by Aboriginal elders and put forward as a petition by the First Nations National Constitutional Convention, which was held over four days.

The group met with more than 1,200 people around the country and drew up the statement, which calls for a ‘First Nations Voice’ in the Australian Constitution.

It asks for a supervised process of ‘agreement-making’ between the Australian government and Aboriginal and Torres Strait Islander representatives to ensure the country is governed universally.

It is a ‘statement of acknowledgement’ that asks for a Makarrata Commission to be involved with and oversee decision making that impacts Aboriginal Australians.

‘Makarrata’ is a Yolngu word that means to come together after a struggle or dispute, to make peace

In it’s indigenous policy, Labor committed to establishing a Makarrata commission, which will develop a national framework for treaty-making and to support and fund local truth-telling efforts, in partnership with First Nations groups and local communities.

‘In 1967 we were counted, in 2017 we seek to be heard. We leave base camp and start our trek across this vast country. We invite you to walk with us in a movement of the Australian people for a better future,’ the Uluru Statement from the Heart reads.

In 2021, it was awarded the Sydney Peace Prize, and was centre stage for Anthony Albanese’s landmark opening speech as Australian Prime Minister.

‘Together we can be a self-reliant, resilient nation, confident in our values and in our place in the world. And together we can embrace the Uluru Statement from the Heart.’

Read the full Uluru Statement From The Heart

We, gathered at the 2017 National Constitutional Convention, coming from all points of the southern sky, make this statement from the heart: Our Aboriginal and Torres Strait Islander tribes were the first sovereign Nations of the Australian continent and its adjacent islands, and possessed it under our own laws and customs.

This sovereignty is a spiritual notion: the ancestral tie between the land, or ‘mother nature’, and the Aboriginal and Torres Strait Islander peoples who were born therefrom, remain attached thereto, and must one day return thither to be united with our ancestors.

This link is the basis of the ownership of the soil, or better, of sovereignty. It has never been ceded or extinguished, and co-exists with the sovereignty of the Crown. How could it be otherwise?

That peoples possessed a land for sixty millennia and this sacred link disappears from world history in merely the last two hundred years? With substantive constitutional change and structural reform, we believe this ancient sovereignty can shine through as a fuller expression of Australia’s nationhood.

Proportionally, we are the most incarcerated people on the planet. We are not an innately criminal people. Our children are aliened from their families at unprecedented rates.

This cannot be because we have no love for them. And our youth languish in detention in obscene numbers. They should be our hope for the future.

These dimensions of our crisis tell plainly the structural nature of our problem. This is the torment of our powerlessness.

We seek constitutional reforms to empower our people and take a rightful place in our own country.

When we have power over our destiny our children will flourish. They will walk in two worlds and their culture will be a gift to their country. We call for the establishment of a First Nations Voice enshrined in the Constitution.

Makarrata is the culmination of our agenda: the coming together after a struggle. It captures our aspirations for a fair and truthful relationship with the people of Australia and a better future for our children based on justice and self-determination.

We seek a Makarrata Commission to supervise a process of agreement-making between governments and First Nations and truth-telling about our history. In 1967 we were counted, in 2017 we seek to be heard. We leave base camp and start our trek across this vast country. We invite you to walk with us in a movement of the Australian people for a better future