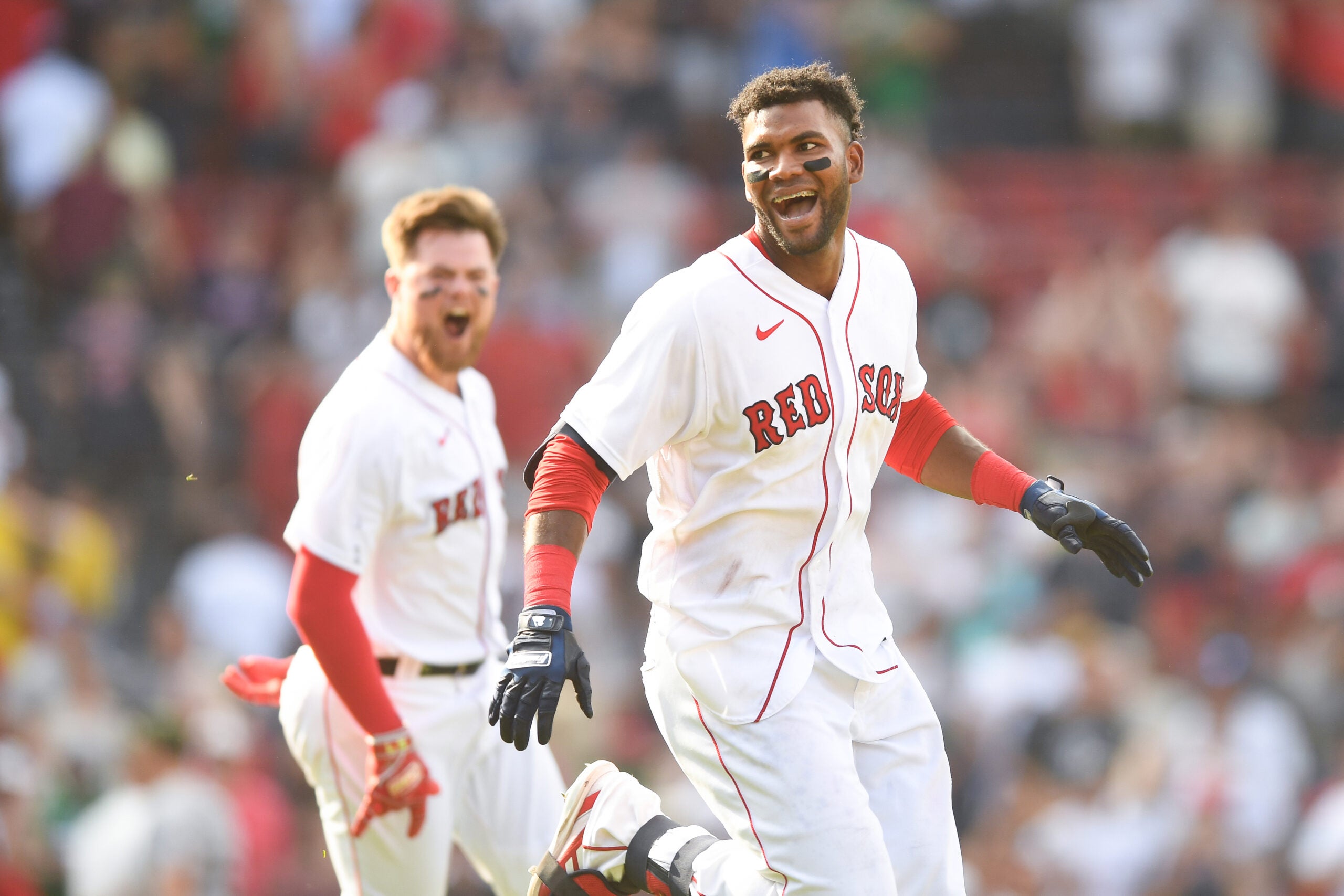 You’d expect the Red Sox to be ecstatic after any player hit a walk-off grand slam, but Franchy Cordero was met by a particularly enthusiastic welcome party on Sunday as he leaped onto home plate after demolishing a hanging slider to right field at Fenway to complete a sweep of the Mariners.

Kiké Hernández threw his arms high in the air as he sauntered toward the plate from third base. Multiple teammates soaked Cordero with water as they danced on the plate with him. Christian Arroyo unloaded the entire water cooler on Cordero’s head.

Cordero hasn’t had an easy couple of years. A promising prospect who recorded 246 at-bats at the major league level for the Padres, he was one of the key acquisitions in the Red Sox’ deal to send Andrew Benintendi to the Royals in Feb. 2021. Since he arrived, he has played 32 more games with the Worcester Red Sox (97) than with the Boston contingent (65). In 48 games last year, Cordero slashed .189/.237/.260 with just one homer and nine RBIs.

Raking in Worcester (and Cordero has certainly raked in Worcester) can only do so much. This season, he has batted notably better in the majors — .234/.315/.362 — but he was yet to hit a homer.

On Sunday, the Red Sox won 8-4 in the 10th inning thanks to his first one.

After Cordero’s homer, Chaim Bloom — the architect of the deal that brought Cordero aboard — could be seen pumping his fist and yelling in a box above the field as Cordero rounded the bases.

“I told you, he was going to start hitting balls in the air, and good things are going to happen,” Red Sox manager Alex Cora said afterward.

There was reason to believe Cordero just needed to get the ball in the air a bit. Per Baseball Savant, Cordero’s maximum exit velocity in 2021 was in the top one percent of the league at 118.6 mph. When he hits the ball, he hits it hard.

“We all saw the struggles he had last year,” Nate Eovaldi said. “To see him be able to turn it around this year and come in, he’s playing first base, outfield. [Cora] always does that with guys. If they’re hitting, he finds a spot for you to be in the lineup. He’s having quality at bats whether he’s getting walks or getting the big hit.

“Everybody is a fan of him, and we’re happy that he’s having the success he is.”

Cora noted that Cordero hit the ball hard on multiple occasions Sunday, and to his point, the 106.1 mph grand slam wasn’t even Cordero’s hardest hit of the game — he torched a liner 109.3 mph just an inning prior in the ninth that was snagged by Mariners’ second baseman Adam Frazier, and he hit a 103.2 mph grounder to first in the second inning.

“He’s great. And there’s a lot of guys in that clubhouse that they’re very happy,” Cora said. “Very quietly, he brings a lot of joy to the team, a lot of energy. …

“Last year wasn’t great. We designated him for assignment but were happy that he was back with us. And from the Dominican Republic to spring training, you can see it. He’s doing an outstanding job controlling the zone and we’re very proud of him.”

Get breaking news and analysis delivered to your inbox during baseball season.