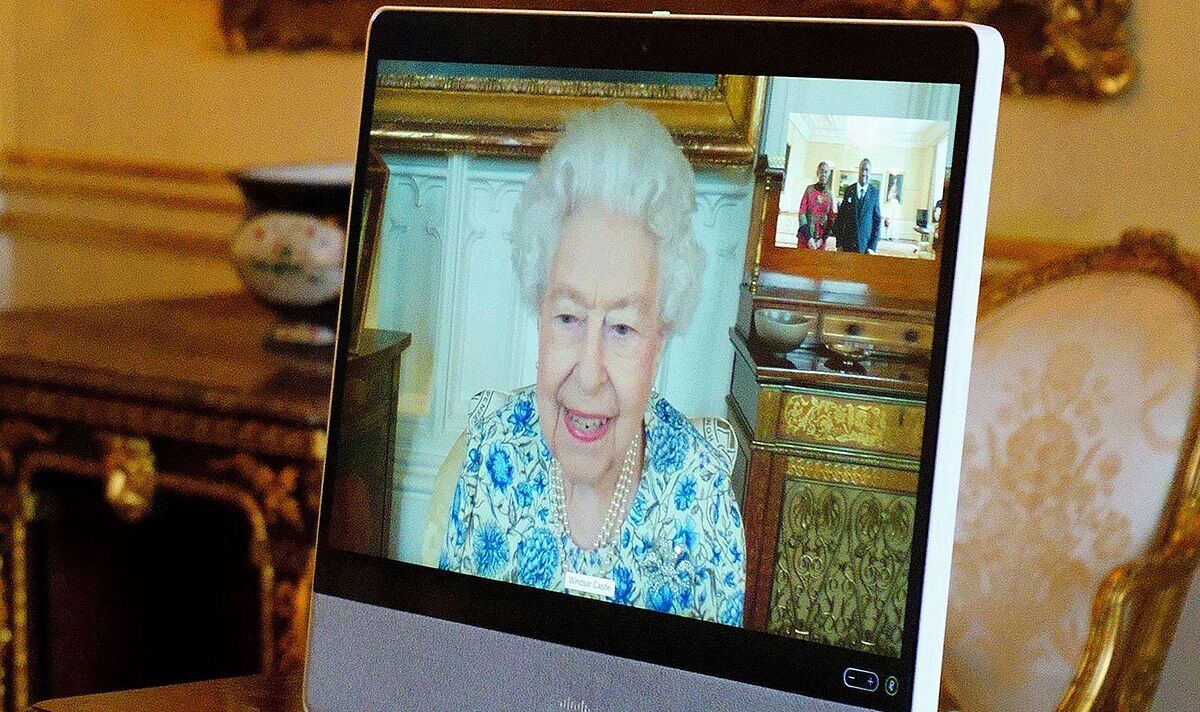 The Queen has been dubbed a “Zoom monarch” as she regularly completes her constitutional duties and various engagements via video conferencing. Technology has enabled the 96-year-old monarch to maintain her work ethic and experts believe despite her “episodic mobility problems”, she will continue on.

With Her Majesty’s current work dynamic utilising teleconferencing, senior royals including Charles and Prince William are stepping up to fill the Queen’s absence at engagements, however, Charles is yet to be granted full responsibility as Prince Regent.

In a set of bumper polls that ran from 2pm on Friday, May 13, to midday on Tuesday, May 17, Express.co.uk asked readers’ opinions on whether they supported the Queen as a “Zoom monarch”, if the UK should have a hybrid monarchy and if Charles should become Regent.

First Express.co.uk asked: “Do you support the Queen as a ‘Zoom monarch’?”

Last week Counsellors of State Charles and William attended the State Opening of Parliament on the Queen’s behalf last week.

This represents a hybrid monarchy whereby the Queen delegates her ceremonial tasks.

Next, Express.co.uk asked: “Should the UK have a hybrid monarchy?”

Charles could be given the responsibility to carry out the Queen’s duties by being named Prince Regent under the Regency Act 1937.

This would allow Charles, who has already stepped up to fulfil some of his mother’s work at events, to carry out the work of the Queen in full.

Dozens of comments were left below the accompanying article as readers shared their views on the future of the Royal Family.

One reader, username Caliban said: “I think the monarchy should take the shape of whatever suits the Queen best to enable her to reign as long as she wishes.

“If that means other members of the family stand in for her whenever she needs help, that is how things have been done for a long time.”

Some praised the Queen’s adaptability and how she had embraced modern technology.

Username Tunnicliffe said: “The Queen seems to have embraced modern technology very well for a 96-year-old, it’s good to see her either way, on-screen or in the flesh, preferably in person but It’s not always possible with mobility problems.”

The Queen celebrates her Platinum Jubilee next month (Image: Getty)

Username Somebody63 said: “Her majesty is continuing to fulfil her promise made to her subjects when she became Queen and is using modern technology to help alleviate the problems she faces daily.”

Another, username Radiotimes wrote: “I think it is wonderful how the Queen has adapted to and embraced technology and as she is unable to travel so much now she can still cover many things that she would otherwise not be able to do.

“In my opinion she needs to use other senior royals just as she is doing, to cover many things that need to be done in person, but she needs to stay in overall charge as long as she is able.

“She doesn’t need to abdicate and Charles can do all the things he is doing without being a Regent.”

Prince Charles at the State Opening of Parliament (Image: Getty)

Others agreed that the Queen should use other senior royals to stand in for her rather than electing Charles as Regent.

Username MToto said: “The Queen promised to serve for her lifetime, she has her mental capabilities and should be allowed to choose what she can and cannot do.

“Prince Charles, Camilla, Prince William, Catherine, Prince Edward, Sophie and Princess Anne are all more than capable of standing in for her.”

Username meto wrote: “She does not need a Regent, she needs the support of her family to carry out the duties when she is physically unable to.”

And username FedUp999 said: “Continue as a Queen but at a leisurely pace, certainly. Her Majesty is too sensible to do so if she feels unable to. Let Charles do the grunt stuff, good practice.”

Meanwhile, others commented that it was time for Charles to become Regent to support the Queen.

Username Annie1939 said: “Yes Prince Charles should be made Regent, his mother made a vow but at 96 she should step down for her son, he will do a fine job.”

And username LadyCoco said: “I think the Queen, at her age, should have a good rest now. She serves the country and the commonwealth magnificently…and I would love to see her free of any duties.”