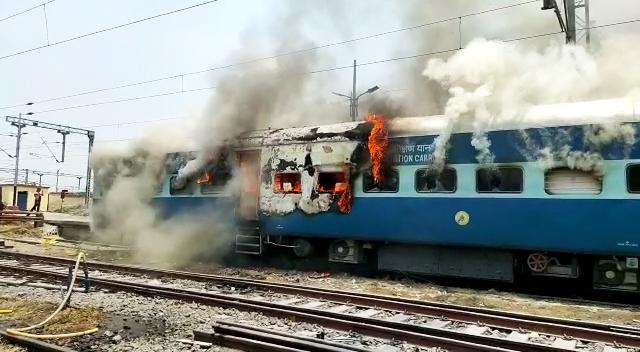 The Ballia police, on Friday morning, thwarted attempts of some local youth who wanted to protest on the railway tracks against the ‘Agnipath’ scheme for short-term recruitment in the armed forces.

District Magistrate Saumya Agarwal said that police forces had been deployed on the railway tracks and the protesters, who attempted to pelt stones, were pushed back by the police.

Meanwhile, train movement at the Deen Dayal Upadhyay station in Chandauli had been adversely affected because of attacks on trains in Bihar by protesters.

According to railway sources, train movement has been halted on some routes while some other trains have been delayed.

The Centre on Thursday raised the upper-age limit for recruitment under the Agnipath scheme to 23 years from 21 years for the year 2022 amid protest and agitation against the new Army recruitment scheme.

“Consequent to the commencement of the AGNIPATH scheme, the entry age for all new recruits in the Armed Forces has been fixed as 17 and a half – 21 years of age. Cognizant of the fact that it has not been possible to undertake the recruitment during the last two years, the Government has decided that a one-time waiver shall be granted for the proposed recruitment cycle for 2022,” the government said in a statement.

Earlier, when the scheme was annouced on Tuesday, the government had said the entry age for all new recruits will have to be from 17 and a half year to 21 year.

Indian Youth Congress (IYC) on Thursday organised a “Mashaal Juloos” against the Agneepath scheme, which they said is the government’s move to mislead the country’s youngsters in the name of employment.

“Agneepath scheme of the Centre is the ‘Vinashpath’ scheme for the youth of the country. The ‘anti-youth’ Modi government is trampling the dreams of youth in the name of ‘Agneepath’ recruitment scheme,” IYC president Srinivas BV said.

The Union Cabinet on Tuesday approved ‘Agnipath’ recruitment scheme for youth to serve in the Armed Forces. The youth selected under this scheme will be known as ‘Agniveers’. About 46,000 of them will be recruited this year.

Defence Minister Rajnath Singh has said that the scheme is a “transformative initiative” and under it youngsters will get an opportunity to serve for the Armed Forces.

“The scheme will increase employment opportunities and aim to create a youthful profile of the Armed forces,” Singh said. However, the scheme has met unprecedented levels of agitations and protests in several states across the country.

Massive protests erupted in Bihar, Rajasthan and some other states against the recruitment scheme, over concerns of job security and other issues. However, many states have also announced schemes where such ‘Agniveers’ — as the beneficiaries of this move are dubbed — can get advantage.