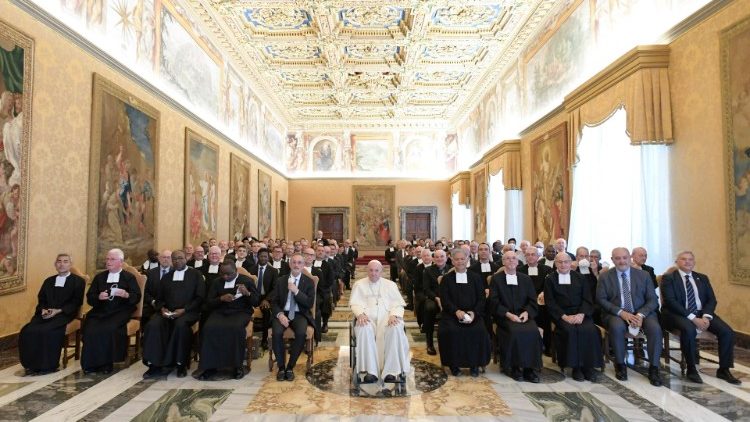 Pope Francis meets the Brothers of the Christian Schools (FSC) and encourages them to continue evangelizing through education as the world experiences a new “educational emergency”.

Pope Francis on Saturday addressed the Lasallian Brothers, formally known as the Institute of the Brothers of the Christian Schools, gathered for their 46th General Chapter.

The congregation was founded in France in the 17th century by Jean-Baptiste de La Salle and is the largest order of religious brothers dedicated to education in the Catholic Church.

Pointing to the theme of the General Chapter: “Building new pathways to transform lives”, Pope Francis noted that for the De La Salle Brothers these “new pathways” are above all educational paths, which they walk in the many schools, colleges, and universities they run in some one hundred countries across the world.

Educating is a gift

This is a “big responsibility” for which to be grateful because “educational work is a great gift,” first of all for those who do it: “it demands a lot but also gives a lot”, the pope said.

“The constant relationship with educators, parents, and especially with children and young people is an ever-living source of humanity, despite all the hardships and problems that it entails”, he added.

Man is the way of the Church

Pope Francis further highlighted that with their work, the Brothers of Christian Schools offer the values of their rich pedagogical tradition: “You educate to responsibility, creativity, coexistence, justice, and peace. You educate to the interior life, to be open to the transcendent dimension, to the sense of wonder and contemplation in the face of the mystery of life and creation. You live all this and interpret it in Christ, and translate it into the fullness of humanity”, said the pope.

“I am reminded of the motto of St. John Paul II in Redemptor hominis: ‘Man is the way of the Church’. You implement this motto in the educational mission.”

Noting that the world is experiencing an “educational emergency”, which has been made more acute by the consequences of the pandemic, Pope Francis called attention to the two great challenges of our time: that of fraternity and that  of caring for the common home, which, he said , can only be addressed through education.

“The educational pact has been broken and now the State, educators, and families are separated. We must seek a new pact and work together.”

He remarked that the Christian community is not only aware of these challenges, but also committed “to build new ways to transform lifestyles” and  that the De la Salle Brothers are an active part of this process: “Indeed”, he said, “you are on the frontline in educating to pass from a closed to an open world; from a throwaway culture to a culture of care; from pursuing partisan interests to pursuing the common good.”

“As educators you know all too well that this transformation must start from the conscience, or it will only be a facade. And you also know that you cannot do this work alone, but by cooperating in an ‘educational alliance’ with families, communities, and ecclesial groups.”

Concluding, Pope Francis encouraged the De La Salle Brothers to continue “evangelizing by educating and educating by evangelizing”, recalling that “a Christian educator is above all a witness of Christ, and is a teacher to the extent that he is a witness”.