Sauti Sol’s threat of taking legal action towards Raila Odinga and his political outfit Azimio la Umoja One Kenya Alliance for breach of copyright has been addressed by ODM. The band had yesterday, May 16 written a statement to their fans to declare that they should not be associated with any political campaign/party; neither should their songs.

They distanced themselves from Raila’s Azimio, who used their song to unveil his running mate Martha Karua. The consequences became dire after Sauti Sol realized their song was being used in political endeavours. Their statement aligned everything in black & blue;

“We did not licence this song to the Azimio la Umoja campaign neither did we give any consent to it’s use in the announcement of their vice-presidential candidate.

“We’re disappointed by the Azimio la Umoja campaign’s blatant disregard of our right to control the use of our copyright.

It turns out the song wasn’t used inadvertendly by the Azimio. They now claim that it’s because they admire their work that they decided to use the song.

”“We would like to assure our celebrated musical [email protected] that we love them & appreciate their music so much.The group has carried our country’s flag so high in international fora and every Kenyan appreciates this. Playing their song yesterday was a show of love for their work,” ODM stated. 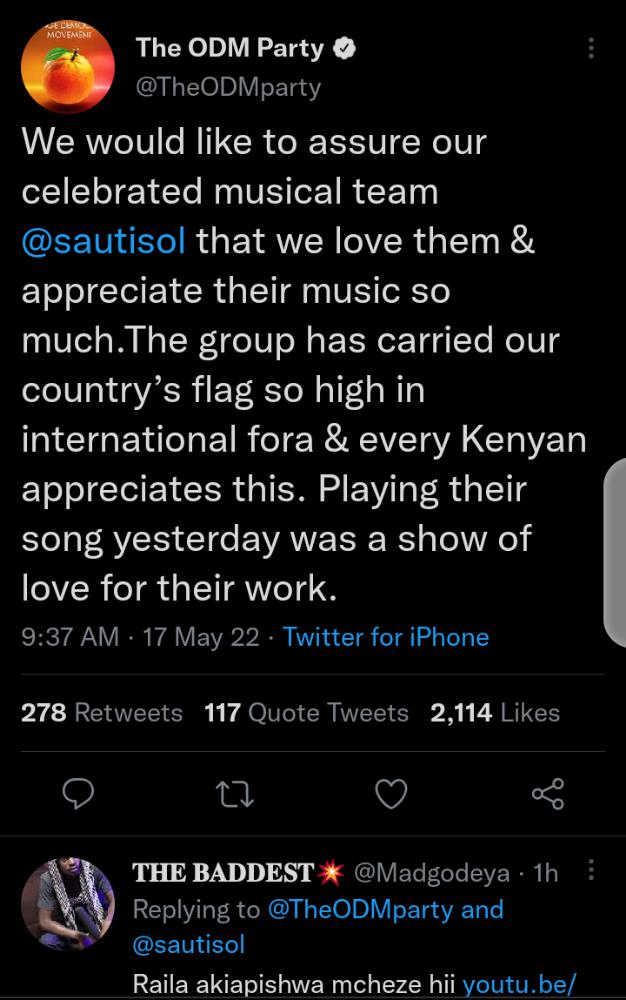 The predicaments between the two are yet to be settled. But at least there’s a response to the paramount allegations.