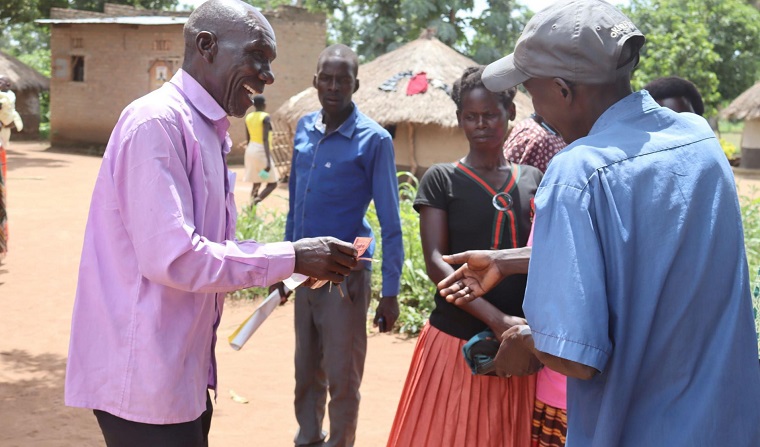 The opposition has accused the ruling National Resistance Movement (NRM) of bribing voters ahead of the Omoro County by-election slated for May 26.

Six candidates are vying to fill the vacant seat previously occupied by former speaker of parliament Jacob Oulanyah who passed away on March 20, 2022. The candidates are; Simon Toolit Akecha of National Unity Platform (NUP), Andrew Ojok Oulanyah (NRM) and Oscar Kizza (Alliance for National Transformation). Others are; Terrence Odonga, Jimmy Walter Onen, and Justine Odong of the Forum for Democratic Change (FDC).

Some of the opposition candidates however allege that since the open campaigns commenced on Monday, NRM officials have been dishing money in every rally convened by their candidate Ojok.

Akecha says they have evidence of NRM party members giving out money to voters in various areas within the constituency. He alleges that the majority of those being given money are women groups who receive about Shs 1 million at every rally.

“They are now giving T-shirts and money, you saw them lining up there…but we tell them; eat that money. I have been a commissioner at URA for 14 years and I know this is government money, it belongs to the taxpayers. Eat that money, even me, when they give me I will take it. That is the message we’re sending to our voters,” said Akecha.

Our reporter also witnessed the issuance of money by some NRM party members to electorates in several areas after campaign rallies held between Monday and Friday in Omoro Constituency. For instance, in Te-Olam village, Odek sub-county on the first day of the campaigns, Ojok, through his campaign team, left supporters with at least Shs 1.2 million to share amongst themselves.

But Emmanuel Dombo, the NRM director of communications denied the allegations that their members are dishing out money to bribe voters during rallies. He says they have instead been giving out sodas and water to quench the thirst of their supporters due to the current hot weather.

“In rallies, people have been given either water or soda because of the weather. It is very hot and if the budget allows some transport. But where we have had meetings in the morning, there is no need for water. So for us, we use money in conformity with the law that governs elections. As to what other candidates are saying that they have been bought out – those could be allegations to justify their losing at the end of the elections but it is not the method of the National Resistance Movement,” said Dombo.

Dombo notes that the party doesn’t support its members giving money to voters during campaigns unless it’s a meeting that requires a transport refund.

“To give money in a rally? I have not seen Ojok do that. Unless there are NRM enthusiastic supporters who go to places we have been and they try to do that or there are people who want to frame us but for us, we’re totally against the use and distribution of money unless it is in a meeting and people require a transport refund,” he added.

Rosemary Seninde, the NRM director for mobilization, equally refuted the claims that they are bribing voters during their campaigns, arguing that they are well versed with the electoral commission guidelines. She says it’s not a crime to give their supporters a “drink” at the end of a meeting or campaign.

Electoral Commission spokesperson Paul Bukenya told URN in an interview on Friday that they can only handle the complaint of voter bribery if the claims are formally tendered before them for further investigation.

“We handle cases that are brought to us formally, the evidence and all that. If someone has observed non-compliance with the guidelines for the campaign should report them. We were very clear on guiding the candidates,” says Bukenya.

According to the Electoral Commission road map the campaigns are expected to end on May 24.