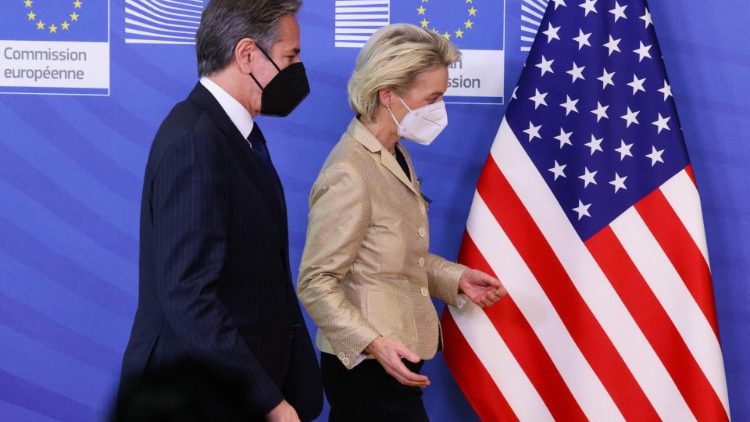 US Senate Minority Leader Mitch McConnell led a delegation of Republican senators to meet with Ukrainian President Volodymyr Zelensky in Kyiv, as foreign ministers from NATO military alliance gather in Berlin to discuss Finland and Sweden joining the Western military.

Sunday’s NATO gathering will happen despite warnings from Moscow of unspecified consequences. That did little to prevent US senators from meeting with Ukrainian President Volodymyr Zelensky in Kyiv.

Zelensky shared a video of the surprise meeting online on Saturday, calling the visit a “powerful signal of bipartisan support” for Ukraine.

The footage shows Republican Senators John Barrasso of Wyoming, Susan Collins of Maine, and John Cornyn, of Texas, walking calmly alongside McConnell, of Kentucky, in the sunshine in Ukraine’s capital.

Elsewhere in Europe, US Secretary of State Anthony Blinken rushed to Berlin, Germany, to encourage ministers of all NATO member states to accept Sweden’s and Finland’s membership. Both Nordic nations say they need to join the world’s most powerful alliance citing Russia’s ongoing invasion of Ukraine.

And White House Press Secretary Jen Psaki says most NATO nations support their application without delay. “I think there is no question, and you have seen this from the public statements of a number of NATO leaders, that there is broad support from NATO member countries in Finland and Sweden [joining],” she stressed.

But Turkey’s President Recep Tayyip Erdogan is not supporting the NATO membership of Sweden and Finland, saying Scandinavian countries are guesthouses for terrorist organizations.”

Turkey has repeatedly criticized them and other European countries for their handling of organizations deemed to be “terrorists” by Ankara.

These groups include the Kurdistan Workers’ Party and Syrian Kurdish People’s Protection Units, and the followers of the United States-based Muslim scholar Fethullah Gulen.

Ankara has said Gulenists carried out a coup attempt in 2016, but they deny the accusation.

If Finland and Sweden join, as is still expected, NATO’s land border with Russia is set to more than double.

Russia currently shares a land border of 1,215 kilometers (754 miles) with NATO members. Once Finland joins that will increase to 2,600 kilometers (1,616 miles).

While both countries had already cooperated with NATO, joining the alliance would bring Sweden and Finland under the umbrella of Article 5. That guarantees an attack on one NATO ally is an attack on all.

The Finnish president called his Russian counterpart to tell him about the move – which Vladimir Putin described as “a mistake.”

However, Finnish President Sauli Niinistö told reporters his country had no other choice than to join NATO as Moscow changed its military doctrine and invaded Ukraine.

“What happened on February 24th, which continues the huge warfare Russia is having in Ukraine, surely that also changed the picture,” he said. “They are ready to attack a neighboring country. If that were the case that we join, my response [to Russian President Putin] would be: ‘you caused this. Look at the mirror’,” Niinistö added.

The mayor’s comments came after a respected military think tank said Ukraine has “likely won the battle” for Kharkiv.

Yet, Ukraine’s President Volodymyr Zelensky cautioned that “very difficult” negotiations are underway over the evacuation of wounded fighters from the bombed-out port city of Mariupol in the south.

And for now, Kyiv and Moscow’s forces continue to engage in a grinding battle for the country’s eastern industrial heartland in a war that has claimed tens of thousands of lives.