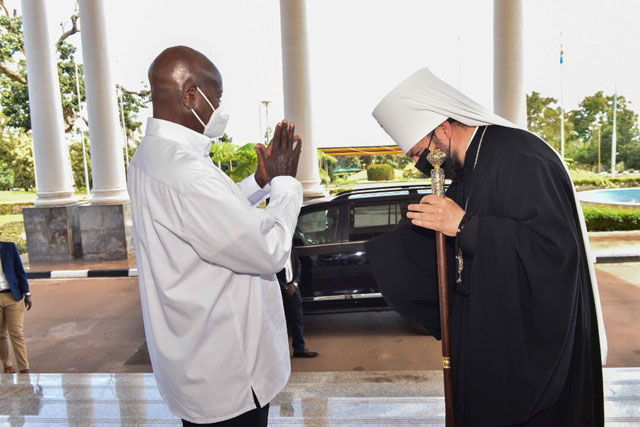 In a press statement issued by the Presidential Press Unit, Museveni promised to support the church in preaching the word of God. “I follow Christ, so anyone who says he or she is a Christian, I support them,” he said.

He quoted the story of the good Samaritan in the bible as the principle of setting up their Church in Uganda and said they will be known by their deeds. He urged them to promote education and health alongside their religion for the social-economic transformation of the people.

Metropolitan Leonid of Klin and his team briefed President Museveni about their religion and their development projects on the continent.

“I am glad to finally be on African soil, in different status, and with other powers. The Orthodox Church of Russia made a decision to come into Africa and spread the gospel and improve relations commercial and religious with the continent,” the Metropolitan Leonid said adding. “We have come with good goals, bringing peace and development to the continent,”.

On December 29, 2021, the Holy Synod of the Russian Orthodox Church at its session made the decision to form a Patriarchate Exarchate of Africa. Metropolitan Leond (Gorbachev) was appointed as Patriarchal Exarch with the title “of Klin”.

On 7 January 2022, in the Cathedral of Christ the Savior in Moscow, Patriarch Kirill of Moscow and All Russia elevated him to the rank of Metropolitan.