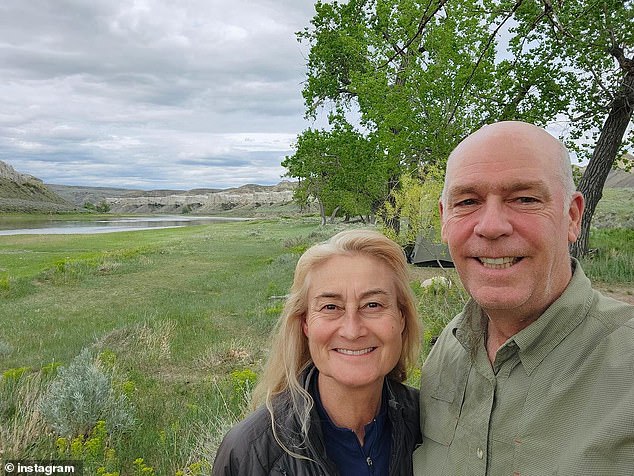 Montana Governor Greg Gianforte was vacationing in the Italian region of Tuscany while his state was dealing with what officials called a ‘once-in-every-500-years’ flooding disaster.

It was finally revealed Thursday that the governor and his wife were staying at Casole d’Elsa – a comune in the region – by Newsy.

The governor – who previously refused to confirm the location of his trip – is now returning to Montana Thursday evening as historic flooding continues to ravage the state, and Yellowstone National Park faces ‘indefinite’ closure.

The governor’s office had previously said that he will be returning ‘as quickly as possible,’ but provided no specifics about when that would be.

Many compared Gianforte to Ted Cruz, who came under fire for vacationing in Cancun while Texans froze to death during a mass power-outage in winter, 2021. The meme superimposed Gianforte’s head onto a photo of Cruz walking through the airport while returning from the Mexico trip. 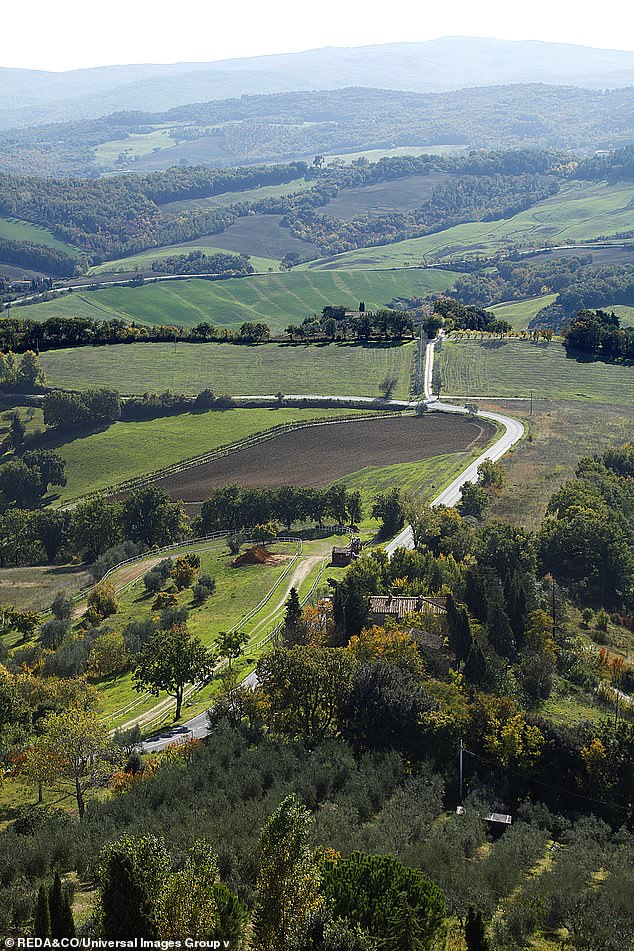 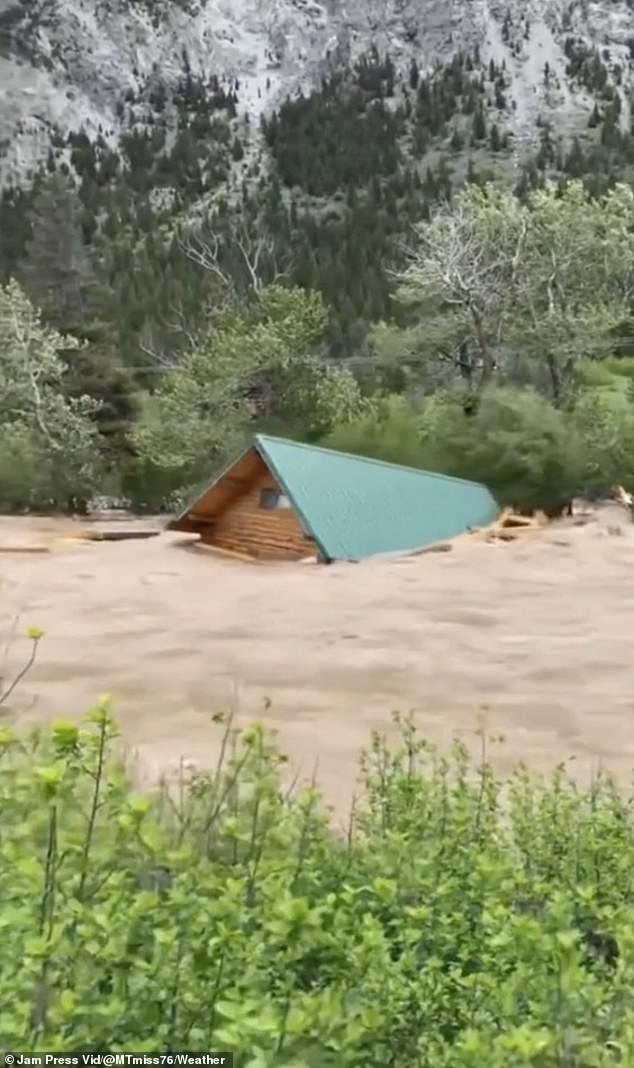 The governor – who previously refused to confirm the location of his trip – is now returning to Montana Thursday evening as historic flooding continues to ravage the state, and Yellowstone National Park faces ‘indefinite’ closure

‘Greg Gianforte took lessons from Ted Cruz apparently,’ wrote one user, with a reworking of a popular meme showing a car turning off at an exit signed ‘mysterious trip abroad’ when the other option was ‘responding to floods with on the ground leadership.’

‘Greg Gianforte pulled a Ted Cruz and is vacationing out of the country while Montana blunders its response to massive flooding,’ wrote another.

Despite assurances from the republican governor’s office, some Montana lawmakers found his absence inexcusable.

‘In a moment of unprecedented disaster and economic uncertainty, Gianforte purposefully kept Montanans in the dark about where he was, and who was actually in charge,’ said executive director of the Montana Democratic Party, Sheila Hogan, ‘Again, we ask, where in the world is Gov. Gianforte?’ 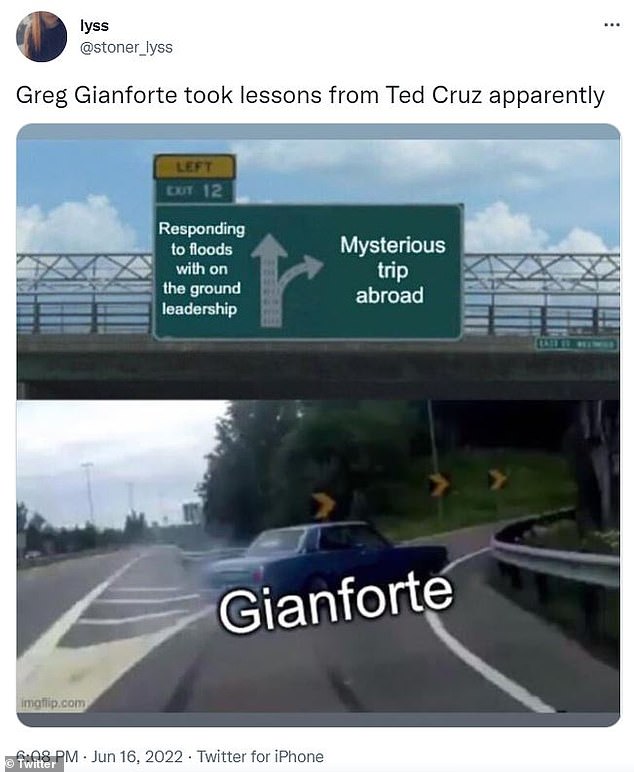 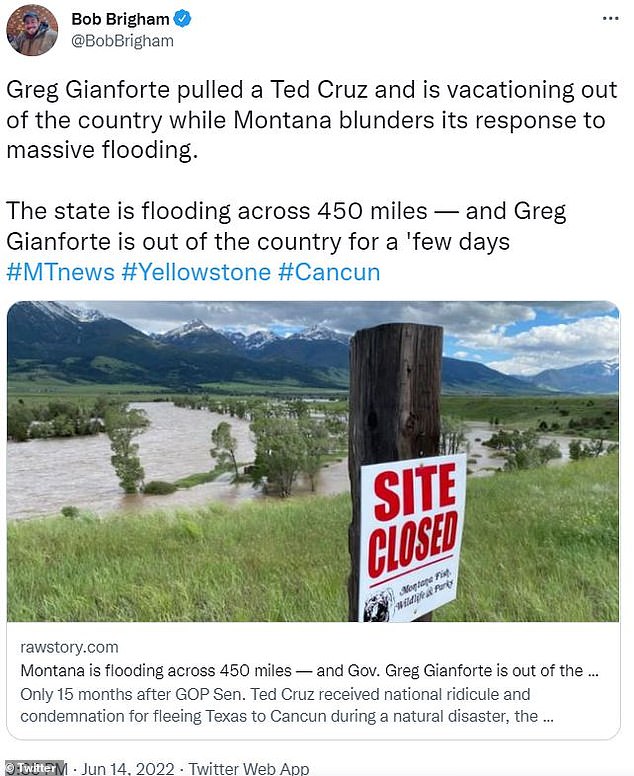 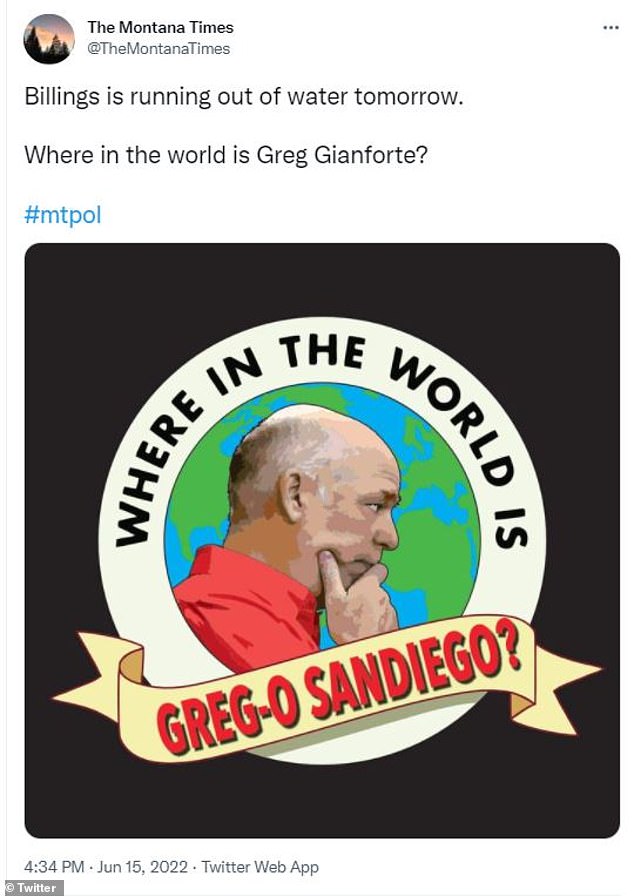 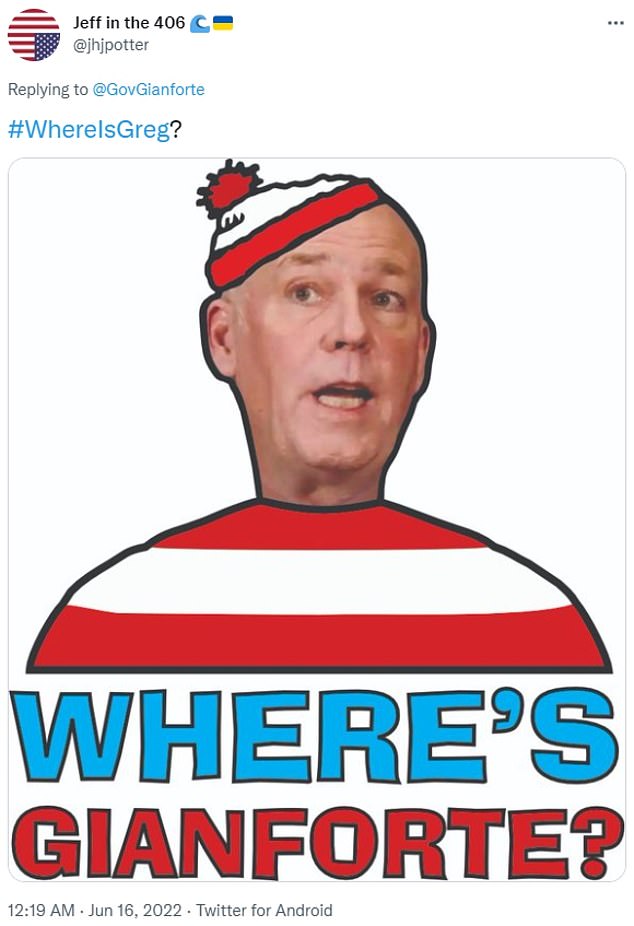 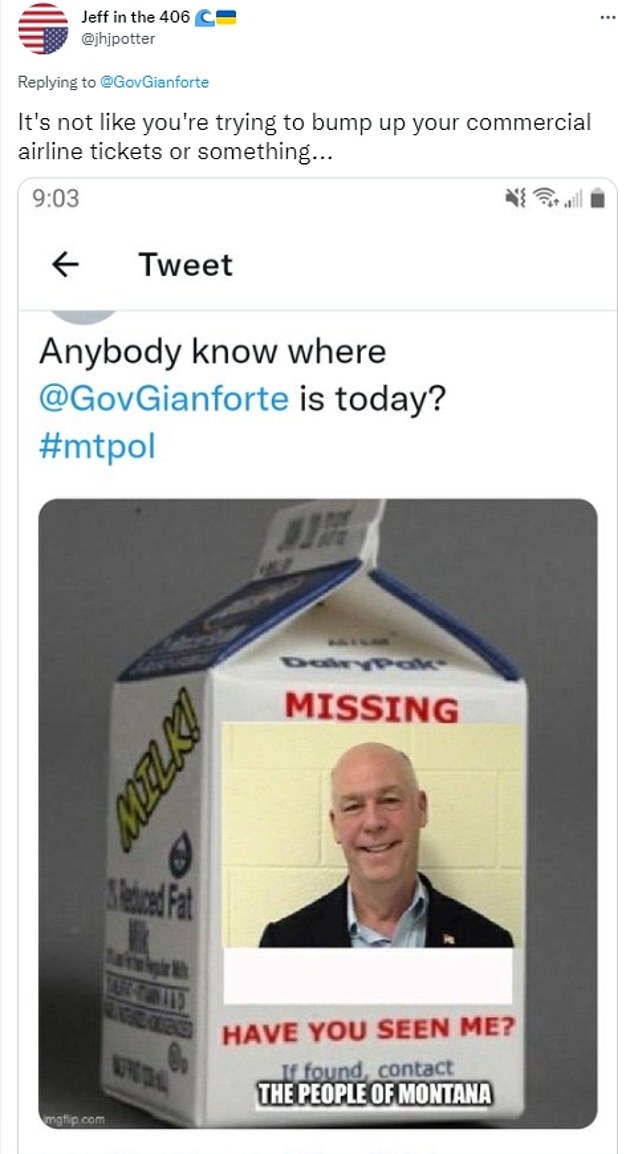 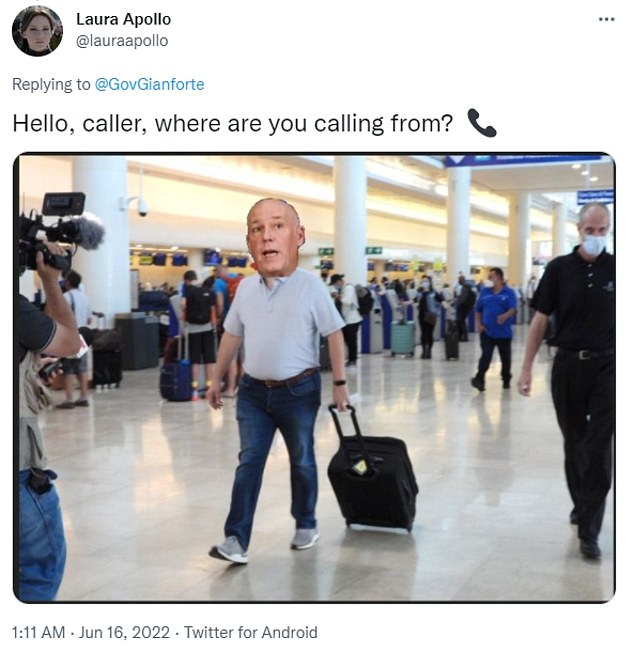 The peanut gallery on Twitter – where Gianforte has published over 30 tweets about the flooding – have been equally unimpressed by the absence.

‘Who is we??? And where in the h**l are you?’ wrote one user in response to a tweet from the governor saying ‘We are closely monitoring the flooding.’

‘Is that the Royal We? And monitoring from where?’ wrote another.

Numerous memes have also appeared in the comments of the governor’s tweets, one depicting him in a Where’s Waldo outfit over the question ‘Where’s Gianforte?’

Another put Gianforte’s picture on the side of a milk carton beneath the statement ‘MISSING,’ and underneath a plea: ‘Have you seen me? If found, contact the people of Montana.

Still another compared him to the old TV series ‘Where in the World is Carmen San Diego’ as people continued to search for the governor.

Gianforte has been active on Twitter throughout the disaster, writing that he was ‘closely monitoring’ the situation, leading to outraged and mocking replies from users on the platform.

The governor has also received criticisms from Montana lawmakers, who have accused him of trying to hide the fact that he has been abroad while his state was in crisis. 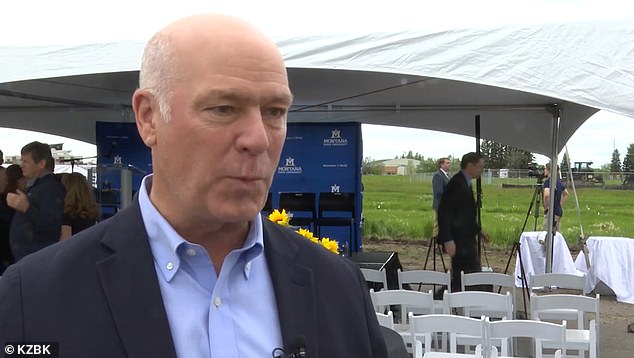 Montana Governor Greg Gianforte. He has not been seen in Montana since June 10, as seen above, and his office confirmed that he has been out of the country 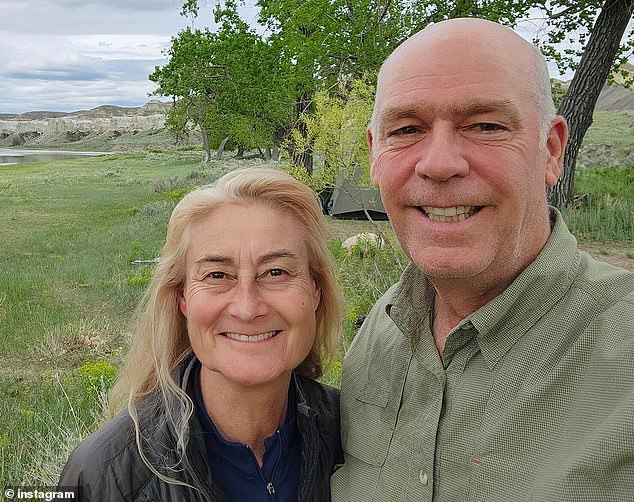 Montana Governor Greg Gianforte and his wife, Susan. The pair are said to be on out of the country on a personal trip as his state experiences severe flooring 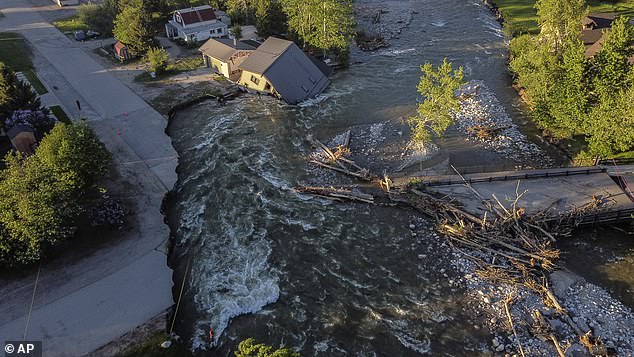 Gianforte’s absence comes as unprecedented flooding ravages communities throughout his state. Above, Red Lodge, Montana is washed out by floodwaters

The governor was last seen in public at the groundbreaking of a Montana State University building in Bozeman, on June 10, according to the Bozeman Daily Chronicl. The next day, the first flood warnings were issued for the Yellowstone region.

Three days after Gianforte was last seen – after flooding washed away countless Montana homes, stranded entire towns of citizens, and left drinking-water supplies in jeopardy – he signed over his powers to Lt. Governor Kristen Juras.

Juras signed a state disaster declaration the next day.

‘I have declared a statewide disaster due to flooding to help impacted communities get back on their feet as soon as possible,’ Gianforte tweeted that day. 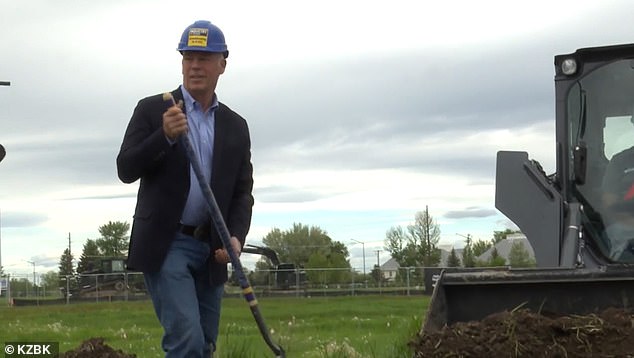 Gianforte was last seen in public on June 10 during a groundbreaking event at Montana State University in Bozeman, above 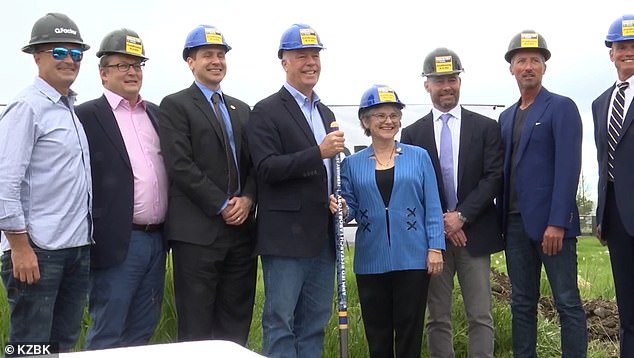 Gianforte (above, middle) during an event at Montana State University, in Bozeman on June 10, the last time he was seen in public before the state disaster

As local Montana outlets began to note the governor’s absence, Gianforte’s office released a statement giving a vague explanation of his whereabouts.

The statement said that the governor was on ‘long-scheduled personal trip with the first lady,’ abroad, and that he would was ‘returning early and as quickly as possible.’

The release also included a ‘non-exhaustive summary’ of actions taken by the state to respond to the disaster.

‘Gov. Gianforte has also been in regular communication with local elected leaders (including commissioners and legislators), local law enforcement officials, and state and local disaster and emergency services personnel,’ wrote gubernatorial spokesperson Brooke Stroyke, according to the Independent Record. 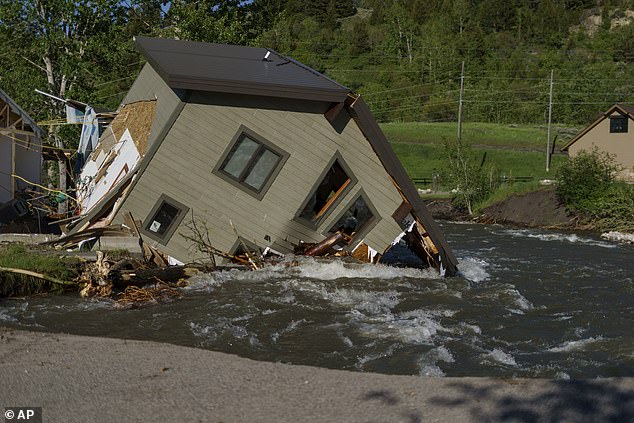 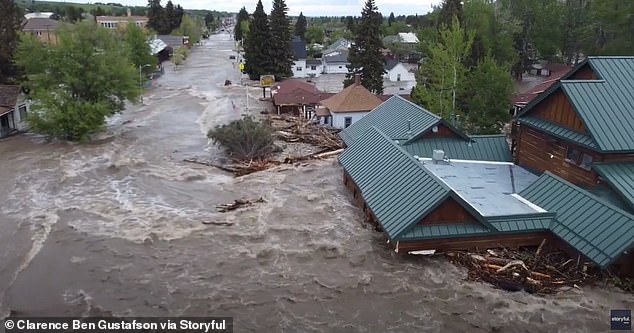 The incident is not the governor’s first brush with controversy as a political figure. While running for Montana congress in 2017, he was arrested and cited with a misdemeanor for attacking Guardian journalist Ben Jacobs.

Jacobs had been at Gianforte’s campaign office on the eve of house special election that May, when the politician became angry at the reporter and ‘body-slammed’ him to the ground.

He has also been given several fines for illegal hunting practices, killing several animals that were being monitored for research. 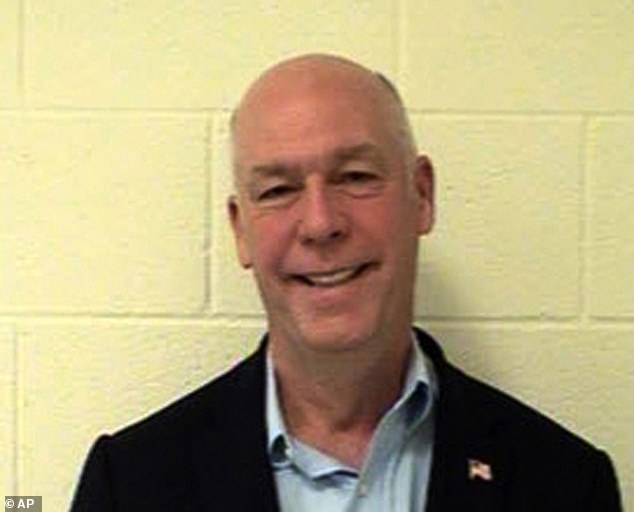 Gianfotre’s 2017 mugshot, after he was arrested for attacking Guardian journalist Ben Jacobs

As Gianforte remains missing abroad, Yellowstone National Park officials said they don’t know when they will be able to open the northern section of the park.

Park officials characterized the severe flooding tearing through the region as a once in a ‘thousand-year event,’ that could alter the course of the Yellowstone river and surrounding landscapes forever.

10,000 tourists were evacuated from the park during the disaster – including a dozen trapped campers who were rescued by helicopter.

Meanwhile, the Billings water treatment plant restarted operations ‘at a very low capacity’ on Wednesday night, after it had been swamped by floodwaters. The plant is the only water treatment facility that services the city. 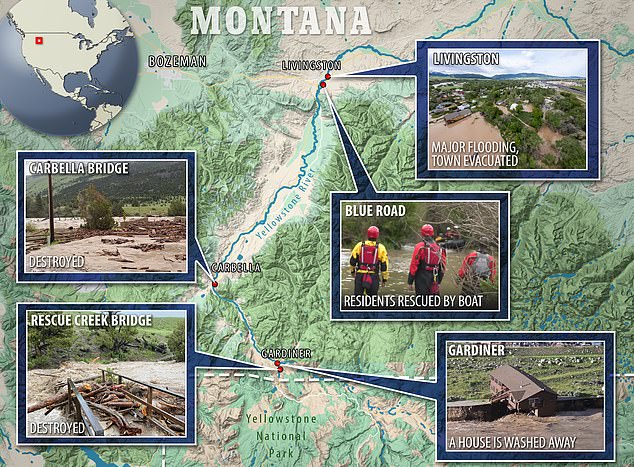