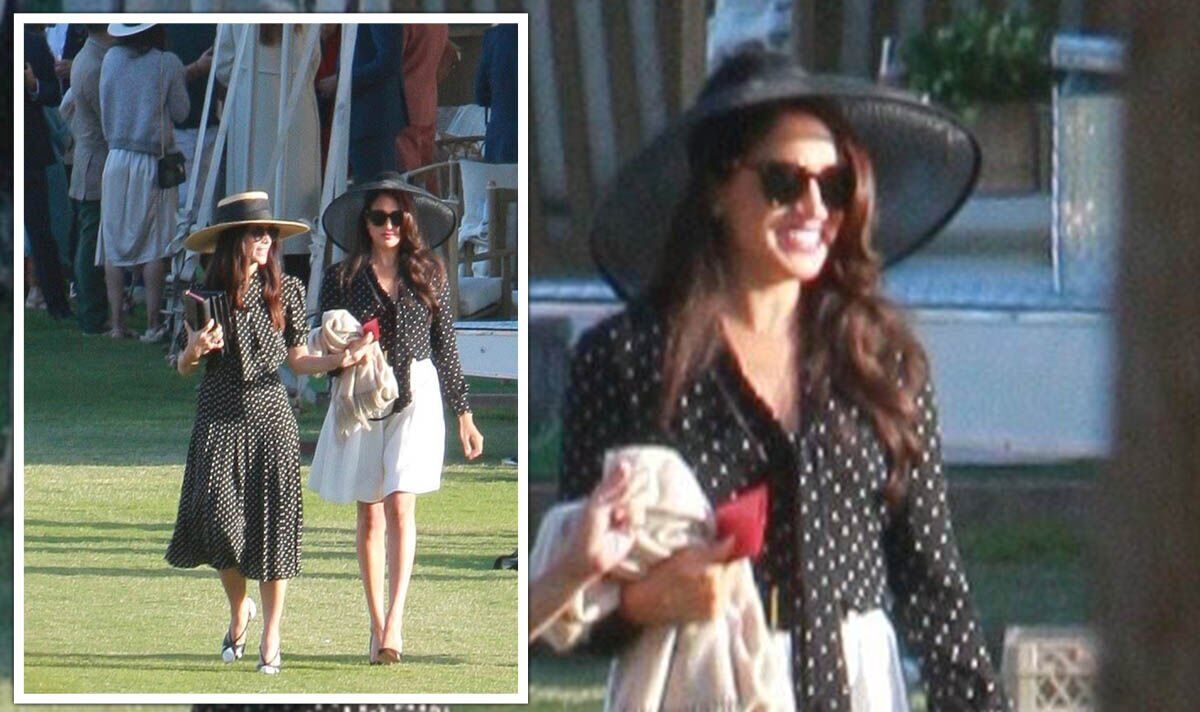 As he presented the Lisle Nixon Memorial trophy, Meghan kissed the cheek of each Los Padres team member.

When it came to her doting husband Harry, however, the Duchess happily took his face between her hand and gave him a more impassioned kiss on the lips.

After they embraced on the podium, the former actress couldn’t help but giggle as the crowd cheered for the Sussexes.

The Duchess, who donned a bright red lipstick, stained Harry’s lips with her kiss and was quick to wipe the colour off with her fingers after seeing what had happened.

The glamorous royal then stood among the polo players and posed for a picture as they raised their cup.

The charity match was organised by the Sussexes and was in support of several local charities, including Foodback Santa Barbara County, Heal the Ocean and CALM4kids.

These organisations concerned causes close to the Sussexes’ heart, including the environment, mental health and fighting hunger.

Among the attendees at the match there was comedian and actress Rebel Wilson, who shared a photo with the Duke after the match.

Taking to her Instagram to publish a picture showing herself and the Duke posing with two more people, Ms Wilson simply wrote: “Team Harry!”

Another attendee was Amanda Nguyen, a social entrepreneur, activist and founder of Rise, a civil rights organization.

Harry and Meghan’s kiss on the podium was reminiscent of another famous royal kiss taking place after a polo match – the one shared by Princess Diana and Prince Charles in 1985.

Four years after their fairytale wedding at St Paul’s Cathedral, the Princess of Wales handed her husband a trophy after his team won a match at the Guards Polo Club in Windsor Castle.

She then kissed him on the lips, much like the Duke and Duchess did yesterday.

Meghan and Harry’s latest public kiss wasn’t the first one shared in a similar setting.