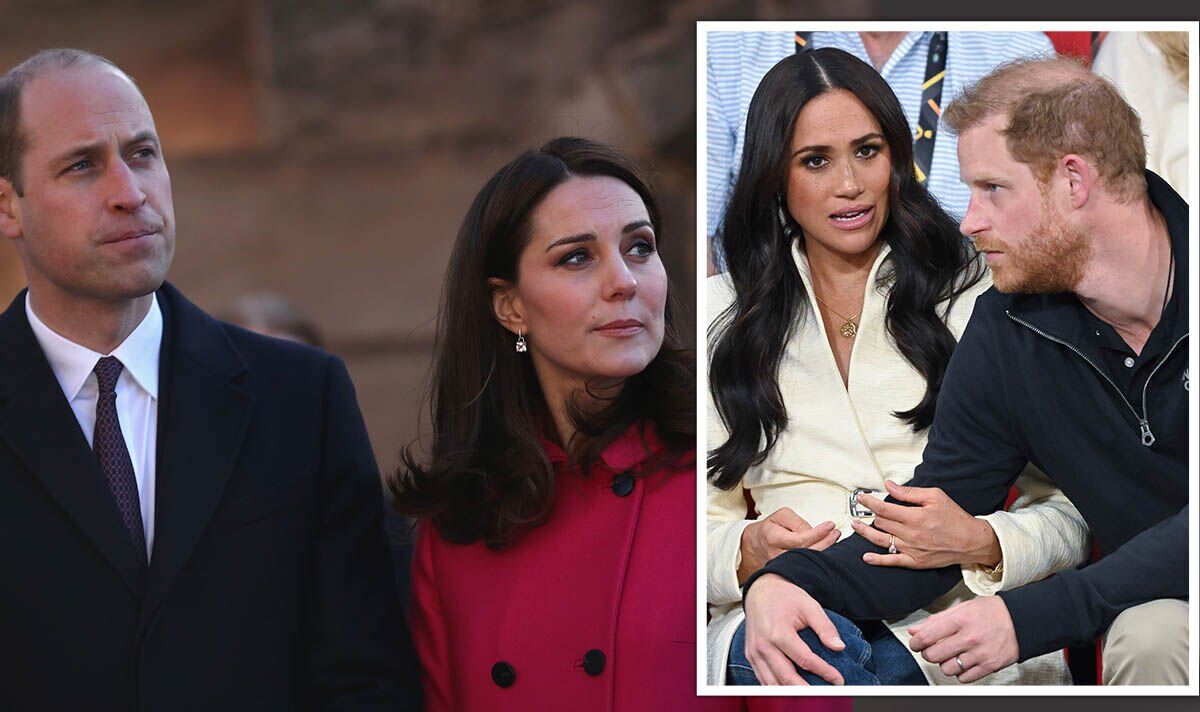 Meghan‘s decision to speak about Kate in her interview with Oprah Winfrey may be an obstacle in attempts to repair the relationship between the Cambridges and the Sussexes, a royal author has suggested. Royal commentator Ian Lloyd believes it will be difficult for the Duke of Sussex to bridge the gap between his family and the royals following his exit as a working member of the Firm and the blistering revelations and claims made over the past months.

Mr Lloyd, author of ‘The Queen: 70 Chapters in the Life of Elizabeth II’, claimed it could be particularly difficult to mend the brotherly bond between Harry and William after Kate was mentioned during the Sussexes’ interview with Ms Winfrey last year.

Asked how can the relationship between Firm members and the Duke and Duchess of Sussex can be healed, the expert told Express.co.uk: “I just can’t see it happening, particularly with William.

“There was all the stuff about Kate and Meghan crying at the wedding in the Oprah Winfrey interview.

“I think they shot themselves in the foot with William and Kate, I don’t think they will get anywhere near them.”

Meghan Markle briefly spoke about Kate during her interview with Oprah Winfrey in 2021 (Image: GETTY)

Meghan and Kate on the Buckingham Palace balcony in 2018 (Image: GETTY)

Yet, Mr Lloyd didn’t entirely rule out the chances of seeing the royal rift healed.

He said: “It’s a family and the relationship can be repaired but I think it would need a long-term investment from both sides and I think it would involve Harry spending time here and doing things without giving interviews.

Meghan mentioned the Duchess of Cambridge after Ms Winfrey asked about the report she had left Kate in tears during a fitting for the flower girls in the run-up to the Sussexes’ nuptials in May 2019.

However, the Duchess of Sussex said the “reverse happened” and it had been Kate who had made her cry.

The Sussexes and the Cambridges at Westminster Abbey in March 2020 (Image: GETTY)

Meghan added Kate had “owned it, and she apologised”.

The Duchess of Sussex mentioned Kate also in another instance during the groundbreaking sit-down interview.

However, this part was not included in the two-hour-long broadcast but, rather, was released by CBS on the following day.

In the clip, Meghan acknowledged it must have been “really hard” for the Duchess of Cambridge to have been branded “Waity Katie” during the years she dated Prince William.

Prince Harry and Prince William photographed in the run-up to the Sussexes’ wedding (Image: GETTY)

However, she added, the attacks the two female royals had experienced were very different.

Meghan said: “Kate was called ‘Waity Katie’ – waiting to marry William – while I imagine that was really hard, and I do, I can’t picture what that felt like, this is not the same, and if a member of his family will say, ‘We’ve all had to deal with things that are rude’ – rude and racist are not the same.

“And equally you’ve had a press team that goes on the record to defend you if especially if you know something is not true, and that didn’t happen for us.”

During the interview with Ms Winfrey, Harry briefly touched upon his relationship with his brother, saying – as he had done in September 2019 while speaking with ITV’s broadcaster Tom Bradby – he “loves William to bits” and has poignant shared experiences with him.

The line of succession to the throne (Image: EXPRESS)

However, he added: “We are on different paths”.

Following this interview, the Dukes met in person on two occasions in 2021.

First, in April last year, when they attended the funeral of Prince Philip.

On their way back to the castle following the service, the Duke was spotted chatting to William seemingly after Kate had started a conversation with her brother-in-law and drawn in her husband.

On July 1, the brothers met again, this time to celebrate the life and legacy of their mother Princess Diana by unveiling at Kensington Palace a statue they had commissioned in 2017.

The Dukes are due to meet again face-to-face within just weeks, as Meghan, Harry and their two children are to return to the UK to mark the Queen’s Platinum Jubilee during an extended bank holiday weekend in early June.

The Sussexes won’t watch the Trooping the Colour parade from the Buckingham Palace balcony on June 2, as the Queen has decided to only invite full-time working members of the Firm.

Nevertheless, Meghan and Harry are likely to take part in other events open to the wider family, such as the service of thanksgiving for the Queen’s reign at St Paul’s Cathedral on June 3.

Ian Lloyd’s ‘The Queen: 70 Chapters in the Life of Elizabeth II‘ is published by the History Press and is available now in paperback.