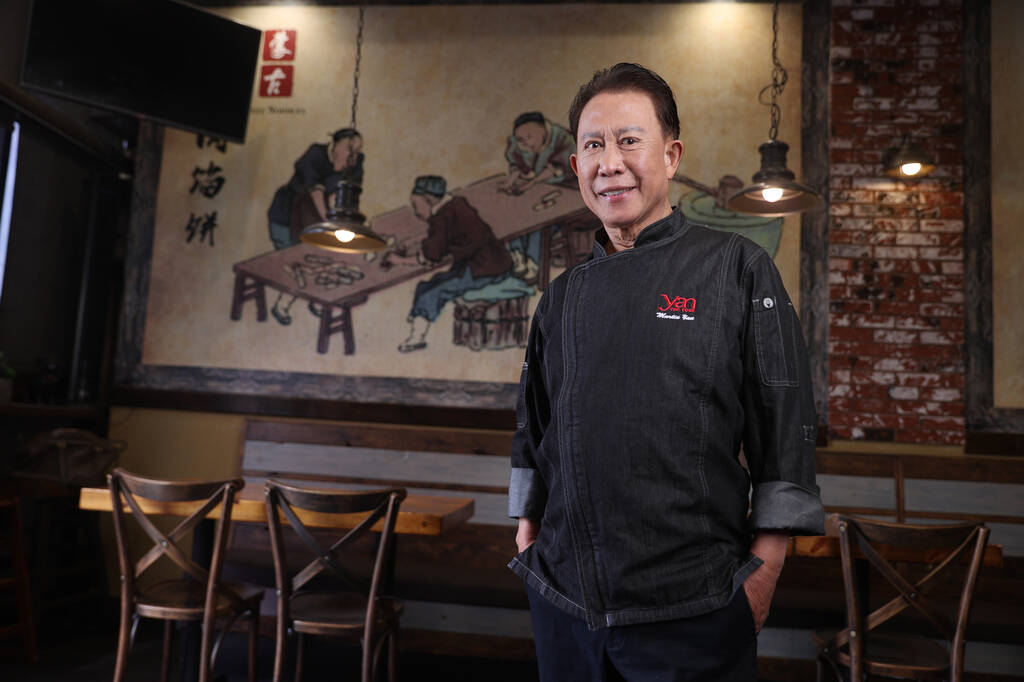 The news inevitably invites the question.

Wait — he’s never had one here before? Really?

Because if there is one chef you’d think had already set up wok in Vegas — Big time! On the Strip! — it would be Martin Yan: the television star of “Yan Can Cook” for 43 years (40 on PBS); the Emmy winner; the recipient of multiple James Beard Awards; the owner, at one time or another, of a dozen restaurants around the world; the author of more than 30 cookbooks; the mentor to generations of culinary students; the globe-trotting ambassador for Asian cooking (especially the cooking of his native China); the man who can carve a chicken in 18 seconds — using a cleaver.

M.Y. Asia will truly be the chef’s inaugural Vegas venture when its 150 seats debut this fall in Bally’s (soon to be the Horseshoe). Unlike his M.Y. China restaurants, now closed, M.Y. Asia will be pan-Asian, featuring the chef’s favorite dishes drawn from his time living, working and traveling across the continent.

In fact, it was Yan’s love for travel that prevented him from bringing what he calls his “Yan-ergy” to Vegas before.

“I was offered to do it several times,” the chef said during a recent lunch at The Noodle Man in south Vegas.

“I work with a lot of casinos doing live appearances. They said, ‘We would expect you to spend six months a year here.’ But if I stayed here, I wouldn’t be able to do things all over the world. If you travel 10,000 miles, you learn more than by reading 10,000 books.”

And then came pandemic travel bans.

“That slowed me down,” Yan said. “I decided maybe it was time to do something in Las Vegas.” Talks with Caesars Entertainment, owner of Bally’s, ensued, leading to M.Y. Asia, which the chef will open with ATM Hospitality, a veteran hospitality company.

At M.Y. Asia, “we want people to see, taste and discover.”

At lunch, there’s time enough for talk of the new restaurant. First, noodles must be given their due as they touch down.

There are Shanxi noodles, from Northern China, made by quickly shaving strips from a block of dough into boiling water. There are Chongqing street noodles, with their numbing flowery heat. And there are thick hand-cut noodles studded with Mongolian beef. The chef uses chopsticks to fill the bowls of his lunch companions with tangles of noodles.

M.Y. Asia, he said, will feature wide-ranging noodle selections, a noodle bar that seats 18 and a nightly noodle floor show.

“We want people to actually see how we make fresh noodles, right in front of our guests.”

The menu is still being developed, but fresh noodles might star in dishes like pad Thai served street market style, or as dense chewy scissor-cut noodles with wild boar, a customer favorite at the old M.Y. China.

Eating Asia, one country at a time

The chef previewed other potential stops on M.Y. Asia’s culinary tour. Green papaya-pomelo salad and pho elevated by Wagyu beef, from Vietnam. Kimchi potstickers and bibimbap, from Korea. Shanghainese braised pork belly: red and rich and glossy. Nasi goreng, the sweet soy sauce fried rice that is a national dish of Indonesia. And Singapore chili crab, a dish traditionally made with mud crab, but not at M.Y. Asia.

“That crab, the shell is hard to break open. The Dungeness crab is much easier to use, so we’re going to make it with Dungeness,” Yan said.

Even the Peranakan food prepared by descendants of first-wave Chinese settlers in maritime Southeast Asia, a style that blends Chinese cooking with indigenous Malay and Indonesian cooking, might make an appearance in a dish or two at M.Y. Asia.

Throughout the menu, the chef said he wanted to incorporate seasonally changing produce, something many Asian restaurants don’t do. To make the point, Yan summoned China’s most revered philosopher. “Confucius said, ‘You eat with the seasons.’ ”

From chop suey to the Strip

And in many places, not just a Chinese restaurant serving the standards. “You got dumpling houses, you got won ton noodle soup shops, you got restaurants specializing in congee,” Yan said. “Thirty or 40 years ago, there was nothing like this.”

No American chef, arguably, has done more to create this popularity and diversity than Martin Yan, who has evangelized for the history and depth and flavor of Chinese cooking (and Asian cooking in general) for more than 40 years, ably assisted by his considerable charm and energy, his knack for connecting with home cooks and his willingness to honor tradition while also departing from it.

Martin Yan paved the way for David Chang, and for the superlative Chinese restaurants populating the Strip. Several of these restaurants offer high-end modern Cantonese cooking, something the chef said he considered when he decided to open a spot in Vegas.

“I wanted something different. That’s why it’s called M.Y. Asia.”

“Yan Can Cook” ranks among the longest-running shows, of any kind, on TV. How does Yan keep the show fresh? Or, for that matter, how does he keep the business of being Martin Yan fresh? Travel, he said. But not that free-floating internationalism that allows you to eat whatever you want wherever you want. For Yan, travel is immersion.

“In Thailand, I eat only Thai food,” he said. “No Chinese, no burgers. In Vietnam, all Vietnamese. In Malaysia, all Malaysian.”

Yan, who is 73, said he had no plans to retire, citing a host of commitments on his schedule: personal appearances, cooking classes, culinary school visits (“I tell the students: Stay with it! Don’t give up!”), a June seminar with Alice Waters (who is 78) and Jacques Pépin (who is 86) on menu innovation, and trips to Asia promoting products like Alaska salmon and USA potatoes.

He’s also the bridge to a hot culinary category. The chef said he will be speaking at Impossible Foods, the maker of plant-based meat substitutes, about ideas for plant-based products.

“What can Japanese restaurants that only serve tofu and tofu products tell Impossible about strategy?” the chef asked. “They started with beef (substitutes), and now they have pork and chicken, and sooner or later, they are going to create a seafood flavor.”

One day, perhaps, on the menu at M.Y. Asia: Impossible seafood noodle soup.