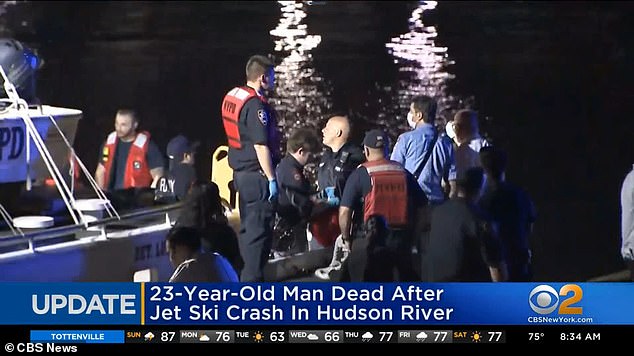 Man, 23, dies and woman, 22, is injured after jet ski FLIPS while driving at high speeds off Manhattan

By Alex Hammer For Dailymail.Com

A 23-year-old man is dead and a 22-year-old woman hospitalized after their jet ski flipped and crashed in the Hudson Saturday, cops say.

The incident occurred just before 7:30 pm, in the water near Battery Place and Vesey Street, just off the southern tip of Manhattan, police said Saturday.

The couple, whom have yet to be identified, had reportedly rented the watercraft from a jet ski service across the river, in Hoboken, on the unseasonably hot May day, before it flipped in the water, cops say.

The force of the impact immediately sent both of the riders hurling into the water, where the current overtook and carried them downstream.

Lawmen said the pair had been driving at high speeds in the buildup to the crash.

First responders pictured at the scene of the crash Saturday night. Cops said the 23-year-old driver of the vehicle – whose body was recovered more than three hours after the crash – died after being pulled underneath a Battery Park City ferry terminal. His girlfriend, who had also been riding the watercraft, was pulled from the water and is currently recovering, cops say

The woman, who cops said had been riding as a passenger, drifted as far as the Brookfield Place Ferry Terminal just north of Battery Park before she was tracked down by the jet ski service’s tour guide, according to police.

Footage taken from the scene shows the staffer at one of the terminal’s docks directing the woman – whom he had thrown a life preserver – to a ladder so that she could hoist herself out of the water.

She eventually climbed to safety, cops said Saturday, after spending only a few minutes in the river, which is known for its strong, unpredictable undercurrents.

The woman was then transported to New York Downtown hospital, where she is recovering in stable condition, cops say.

Her partner, however – reportedly the woman’s boyfriend – was not so lucky.

According to police called to the scene as the woman was rescued, responders were left unable to retrieve the man, after the current reportedly took him underneath the terminal.

NYPD and FDNY then deployed a massive search party of divers, boats, and helicopters to track down the man, whom had been piloting the jet ski before it flipped.

After about three hours of searching, cops were able to locate the man, and pulled his body out of the water at approximately 10:30 pm, roughly 150 yards south of the terminal. He was pronounced dead at the scene.

Police are currently investigating the incident. They have yet to discern how the man lost control of the jet ski.