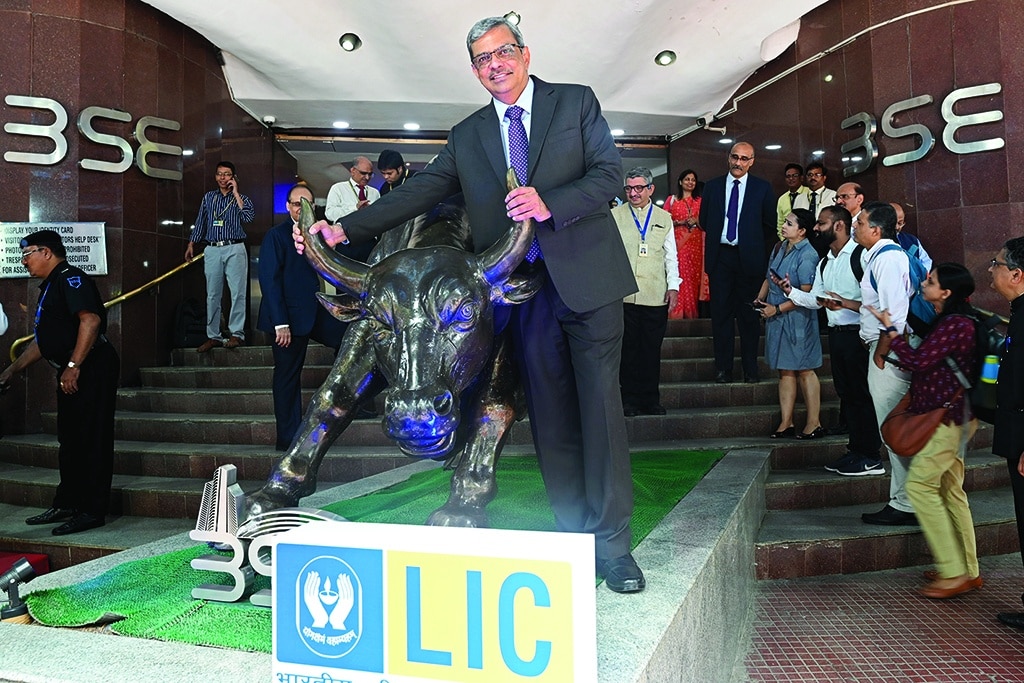 But it was forced to cut back the offer from a planned five percent after markets turned volatile following Russia’s invasion of Ukraine and China’s COVID lockdowns. The offer price of 949 rupees ($12.22) had valued LIC at $77 billion, but the stock traded under pressure all day, closing 7.75 percent lower at 875.45 rupees a share.

The muted debut could test market appetite as Modi seeks to privatize more shares in nationalized companies to plug an estimated 16.6 trillion rupee ($214 billion) fiscal deficit. Market analyst Arun Kejriwal said the slump on LIC’s first day of trading was a “learning” experience, adding that the government will have to do more to convince investors if it wants to sell more of its stake.

But the IPO saw enthusiastic participation from small investors-including many first-timers-and was oversubscribed nearly three times. “I knew it won’t be a great listing but it doesn’t matter to me,” said 30-year-old Ayush, a recent market entrant, who was unbowed by the decrease in share price.

“I bought the shares for the long-term.” Global equities have been tumultuous for most of 2022. Foreign investors have withdrawn a net 1.71 trillion rupees ($22 billion) from Indian markets so far this year, stock exchange data showed, as US monetary policy tightening further roiled sentiment.

India was heavily regulated for decades after independence, and the state still retains an outsize role in the economy. Hundreds of companies are owned by national or lower-level governments, operating in fields ranging from mining and resources to electricity and construction.

Modi has pledged to “monetize and modernize” the sometimes moribund sector, and the insurance giant’s IPO followed a years-long effort by bankers and bureaucrats to appraise the mammoth firm and prepare it for listing. Founded in 1956 by nationalizing and combining more than 240 firms, LIC was a monopoly until private companies were allowed to enter the market in 2000.

It continues to lead the pack with a 61 percent market share and an army of 1.3 million “LIC agents” giving it huge reach, particularly in remote rural areas. But its dominance has declined steadily in the face of competition from net-savvy private insurers offering specialized products. The firm warned in its regulatory filing that “there can be no assurance that our corporation will not lose further market share” to private companies.

In a country where only three percent of the 1.4 billion population has life insurance, analyst Kejriwal said LIC’s potential remains “enormous”. “It has actually bounced back in the last two-three years. And COVID has seen a turnaround in the fortunes of LIC,” he told AFP, pointing to its digitization efforts.

Going public will also force more transparency on the insurance behemoth. “The IPO is going to galvanize LIC into being much more effective than it was,” Kejriwal added. LIC is also India’s largest asset manager, with 39.55 trillion rupees under management as of September 30, including significant stakes in Indian blue chips such as Reliance and Infosys.

LIC’s real estate assets include vast offices at prime urban Indian locations, including a 15-storey office in Chennai that was once the country’s tallest building. The firm is also believed to own a large collection of rare and valuable artwork that includes paintings by MF Husain-known as the Pablo Picasso of India-although the value of these holdings has not been made public. – AFP