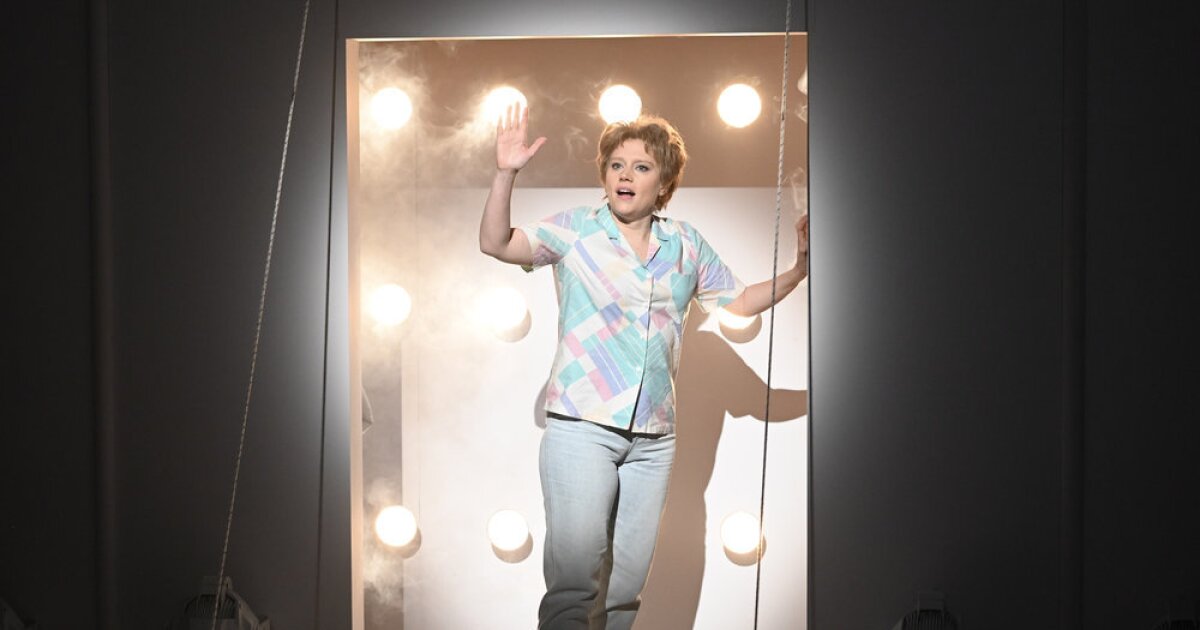 Hosted by Natasha Lyonne with musical guest Japanese Breakfast, the final episode of Season 47 was also the final episode for veteran players Kate McKinnon, Aidy Bryant, Kyle Mooney and Pete Davidson, whose imminent departures were leaked by the press earlier this week.

“I never imagined this would be my life, you know?” Davidson mused during the latest “Weekend Update” segment. Davidson became one of the youngest “SNL” cast members ever when he joined the show at age 20 in 2014.

“I mean, look at me when I started here,” he continued. “Back then, I was just, like, a skinny kid, and no one knew what race I was. And like, now everyone knows I’m white because I became hugely successful while barely showing up to work.”

After acknowledging the “millions of people only watching to see if I bring up Kanye,” Davidson reflected on some of his buzziest “SNL” moments — such as the time he landed in hot water for mocking Rep. Dan Crenshaw (R-Texas), who wears an eyepatch after sustaining severe injuries from an explosion in Afghanistan.

The comedian also alluded to Will Smith’s infamous Oscars slap and the Chris Rock joke about Jada Pinkett Smith’s hair that provoked it. (Pinkett Smith has alopecia, a medical condition that causes hair loss.)

“I was simply making a joke about someone’s appearance without realizing that the medical condition behind it was a sensitive issue — which is an ‘SNL’ alumni tradition,” Davidson quipped.

During his “SNL” tenure, Davidson developed a bit of a ladies-man reputation by courting the likes of “Bridgerton” breakout Phoebe Dynevor, English movie star Kate Beckinsale, pop sensation Ariana Grande and other big names in entertainment. He is currently dating Kim Kardashian, much to the public disdain of her estranged husband, Kanye West.

“When I got engaged, I said [to ‘SNL’ showrunner Lorne Michaels], ‘I just got engaged to Ariana Grande after dating for two weeks,’ and he said, ‘Oh, hold on for dear life,’” Davidson recalled.

“When I auditioned for ‘SNL,’ he looked me right in the eye and said … ‘I don’t think you’re right for this show, so let’s screw this up together.’ And that’s exactly what we did. And that’s why people who don’t think I deserve this job shouldn’t hate me, since we have so much in common. Like, if anything, I should inspire hope … that literally anyone could be on ‘Saturday Night Live.’”

On a more serious note, Davidson, who has spoken publicly about his mental health struggles and drug use, sincerely thanked the folks at “SNL” for “always having my back and allowing me to work on myself and grow.”

“Thank you to Lorne for never giving up on me or judging me — even when, like, everyone else was — and for believing in me and allowing me to have a place that, like, I can call home with memories that will last a lifetime,” Davidson said. “Thank you, guys.”

During the show’s wacky cold open sketch, McKinnon also said so long to “SNL” in her own chaotic way. One of the most influential and versatile “SNL” cast members of the past decade, McKinnon made her Studio 8H debut in 2012.

With a bright spotlight on McKinnon, Saturday’s cold open centered on three women (McKinnon, Lyonne and Cecily Strong) who had been abducted by aliens. At the end of the sketch, McKinnon got misty-eyed while waving goodbye from the door of a spaceship and delivering one last “Live from New York, it’s Saturday Night.”

“Well, Earth, I love ya,” a teary McKinnon said as the studio audience roared with applause. “Thanks for letting me stay awhile.”

Bryant — who was cast shortly before McKinnon — received a brief but sweet sendoff from fellow players Bowen Yang and Michael Che, who presented her with a bouquet of red roses during “Weekend Update.”

“Love you,” Bryant said as Yang and Che planted a kiss on each of her cheeks.

Additionally, Davidson, McKinnon, Mooney and “Baby Aidy” Bryant all got shout-outs during one of Saturday’s digital shorts. In the video, Davidson did impressions of Michaels and rapper Eminem, who made a cameo urging Davidson to stop portraying him.

During the customary on-stage throng as the credits rolled at the end of the show, the outgoing cast members embraced their longtime friends and co-workers a little tighter and a little longer.