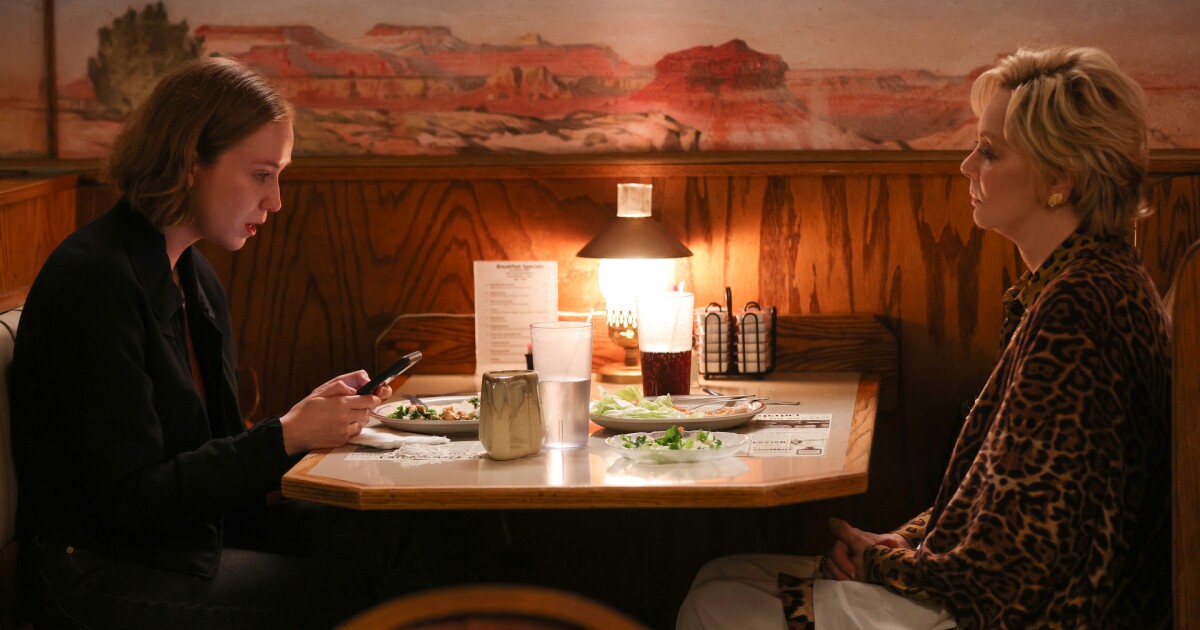 The following contains spoilers from the first two episodes of “Hacks” Season 2.

“What I’m about to say might upset you, but I think it’s better for our relationship if I tell you.”

It’s the moment that “Hacks” fans have awaited for nearly a year, after the HBO Max series ended its debut season with a helluva cliffhanger: Comedy writer Ava (Hannah Einbinder), plenty drunk and freshly slapped, sent an email revealing deeply personal and damning facts about her boss Deborah (Jean Smart) to a showrunner developing a series about an abusive female boss.

“Making the email a cliffhanger last season, we really wanted to make sure that the payoff felt good,” says Paul W. Downs, who co-created “Hacks” with Jen Statsky and Lucia Aniello. “But it’s also not just a one-and-done plot device. It reverberates throughout the entire season and has a huge effect on the relationship and love they have for each other.”

Ava doesn’t immediately break the bad news to Deborah, as the comic legend is busy relishing the excitement of trying out new material for the first time in decades. With her Las Vegas residency now revoked, she’s free to hone her act on the road. But being trapped with Deborah and a big secret in a small car is torturous for Ava; between quirky rest stops and picturesque vistas, she sneaks in desperate calls to their shared agent (Downs), who goes to great lengths to try to make the email disappear.

Ridden with guilt, Ava eventually caves and confesses, just as they happen to be in a particularly zen setting: a crystal shop in Sedona, Ariz. Deborah’s reaction sends lots of expensive rocks flying — made of rubber, of course, for the safety of filming.

“I feel bad because I’m not a professional pitcher, so in trying not to hit my co-star, I bonked her more than once,” says Smart with a laugh. Adds Einbinder, “It got me back into the moment of the scene. Anything for the shot!”

At dinner, Ava informs Deborah that their agent has made the email null and void. Still, Deborah commands Ava to read her the entire email. “It says something about Deborah that she makes Ava read it out loud to her,” says Smart. “It’s sadistic, but also masochistic at the same time. I don’t think she herself even realizes how much it’s going to hurt until she hears what’s in the email.”

Ava pulls up the email on her phone. “Here are some stories you could probably use about someone who treats people like s— and has no remorse about it at all,” she reads. At first, even Deborah is pleased with some of the punch lines: “Once, when I was having an asthma attack, she said, ‘Do you have to do that in here?’ She once refused an employee maternity leave because she thought the baby was ugly and said, ‘Why would she want to be at home with that thing?’”

“We wanted the ‘nightmare boss’ specifics that Ava had witnessed to be a little funny but not too character-damaging,” says Downs — but it also serves as a runway for more disparaging details. “She has a terrible relationship with her junkie daughter who sells photos of Deborah to the tabloids looking like s— because they sell better if she looks like she’s dying; what’s even sicker is that Deborah knows about it and lets it happen,” Ava continues as the smile melts off Deborah’s face. Their relationship could be repaired if Deborah would just tell her she’s proud of her, but she won’t even do that.”

“We always knew it’d be very personal and damning to touch upon her relationship with her daughter,” Statsky says. “It’s the most difficult thing for Deborah to hear that Ava revealed. That was definitely something we really labored over and took a lot of time to get right.”

Ava then moves into her damning conclusion. “The truth is, Deborah Vance is a bully,” she reads. “And the worst kind: one who thinks she’s the victim. Every person in her life is on her payroll and would never be around her if their livelihoods didn’t depend on it — myself included. It’s her own fault she’s so lonely, though she’s too selfish to ever admit it. I think that’s why she needs her adoring fans, because no one in her life actually loves her.”

This final part “is just so brutally honest,” says Aniello. “Deborah finally let somebody try to be close to her, and now she hears what she actually thinks of her. And even though it’s kind of hurtful and mean, I think she knows it’s also quite true.”

The emotional scene was filmed with no rehearsal and only two takes each. “Filming that was really difficult because it’s well-written and it’s hurtful,” says Einbinder, who cried during her initial read of the script. “It’s not just mean, it’s gorgeous prose. Obviously we’re in character, but having to look at Jean and say all of that was so tough because it all just felt so real.”

“Even for someone like Deborah who’s got thick skin, that’s gotta be excruciating,” adds Smart. And after a silent ride back to their motel, Deborah finally responds, “You’re good at writing for me, and I thought it was because you understood me. But it’s because you’re just like me. You’re as selfish and cruel as I am.”

Aniello, who directed the episode, initially planned to film the exchange from the front and the side of the car. But they instead shot it from the back seat. “It’s almost like watching your parents fight in the front seat,” she explains. “There’s something about the intimacy of being so close to somebody that you can hear them breathing.”

The next morning, the two hit the road again, together. “Part of why they continue to work together, even after all the pain they’ve put each other through, is because they both care so much about the work,” says Aniello. “Nothing matters more, even if it should.”

Yet not all is forgiven or forgotten. Ava soon learns that Deborah is suing her for violating the lengthy nondisclosure agreement she signed in the first season. “Despite it being the biggest thing in the world to Ava, it felt so right for Deborah because rich people are constantly in litigation,” jokes Statsky. Smart calls the development “hilarious — she’s like Donald Trump, she just sues everybody for everything.”

Ava’s email has finally been revealed, but that doesn’t mean it goes away fast. “It resets their relationship in a way that allows them to have a different arc this season than they had in Season 1,” says Aniello. “It also ripples into the whole rest of the season in terms of how Deborah hears what Ava writes for her, and whether Deborah becomes a little more self-aware or reflective in how she sees herself.”

Smart applauds the new dynamic. “So much of the humor from Season 1 was derived from these two people, who seem to be polar opposites, butting heads. Now you start to see the similarities between them, but they’re still able to butt heads in really funny ways,” she says. “But also, you hopefully still see that, no matter what they go through, there’s still love between them there, and that they really do make each other better.”

Rated: TV-MA (may be unsuitable for children under the age of 17)