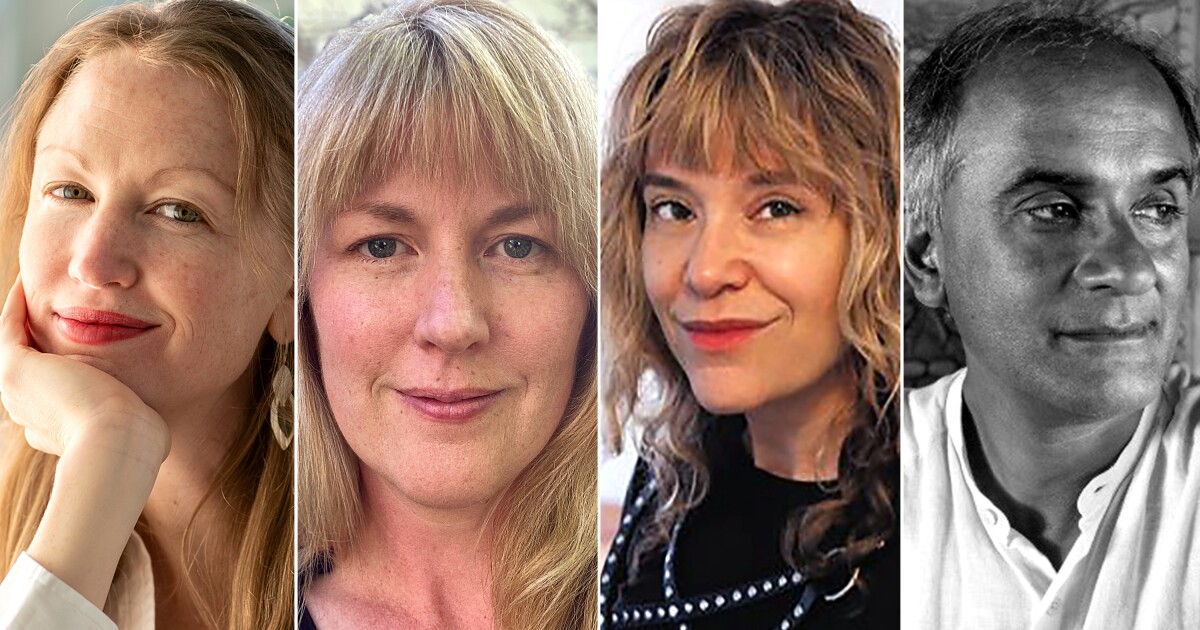 The stories are short but powerful. In just a few pages they transport us to wildly diverse destinations: an Icelandic island escape, an abandoned Peruvian mountain hostel, a research station perched on an Antarctic ice field. Other authors recall connections made while backpacking through Asia, working on cruise ships, riding in a Paris taxi or traveling in their ancestral homelands.

In all, 65 accomplished and well-traveled writers reflect on a passing encounter that left a lasting impression in this month’s book club read, “Letter to a Stranger: Essays to the Ones Who Haunt Us.”

“The concept is so irresistible,” says Times travel writer Christopher Reynolds. “Who can read about it and not think about a person and a place, maybe an unanswered question, that linger in memory?”

Reynolds joins book clubbers May 26 for a conversation with authors Pico Iyer, Maggie Shipstead and Michelle Tea, three of the book’s contributors, and Colleen Kinder, editor of “Letter to a Stranger.”

This intriguing collection arrives as many of us are daring to travel again, or at least dreaming of new adventures. Reynolds, who spent 40 to 50 days a year on the road before the pandemic, cut his own work travel in half the past two years, often focused on destinations close to home in California.

Kinder said the manuscript was completed in the fall of 2020 but already felt like something of a time capsule. “The book certainly reminds me of moving through the world in a more vulnerable and open state,” she says in an interview. “So many of these essays conjure up a pre-COVID era, when we didn’t even realize how free we were.”

Join us: “Letter to a Stranger” book club night will be livestreaming beginning at 6 p.m. PT on May 26. Get tickets and signed books here.

“We spend so much of our lives in the company of people whose names we’ll never know, people we’ll never meet again,” says novelist Leslie Jamison in the book’s foreword. “How rarely we honor them. How rarely we admit to ourselves the strange, unannounced ways they can lodge inside of us.”

In advance of book club night, Los Angeles novelist Maggie Shipstead, author of “Great Circle” and the new “You Have a Friend in 10A,” shared some favorite writers and diversions.

Your next adventure: I got home from Fiji four days ago, so I’m hoping not to go anywhere for a bit! But I’ve been saying for a few years that I would do a long (270 miles) hike in the Swedish Arctic, and I’m hoping that will happen in the late summer.

Last book that kept you up at night: “The Cold Vanish” by Jon Billman, which is about the strange and mysterious ways people vanish in the wilderness and how others search for them.

Something you discovered about yourself since the pandemic: I actually am capable of living with another person!

What’s not on your résumé (that says a lot about you): I like to needlepoint pillows and give them to friends.

Your next project: I’m working on another novel … but slowly.

Mark your calendar for next month’s book club conversation with bestselling author and historian Ibram X. Kendi, who joins us in Los Angeles at USC’s Bovard Auditorium.

Kendi’s new book, “How to Raise an Antiracist,” is geared toward parents, teachers and other caregivers. He addresses such questions as: How do we talk to kids about race and racism? How do we teach children to be antiracist? How are kids at different ages experiencing race?

Get tickets for this June 22 event here.

We Can Teach You That

You know the weekend drill: Wake up and search the new listings over coffee. Spend Saturday cruising open houses. Get discouraged by million-dollar price tags on modest fixer-uppers with no yards and even less charm. Repeat.

The latest We Can Teach You That event can offer much-needed help in finding your retreat amid the madness. Times staffers Andrew Khouri and Patt Morrison join Yolandra McClinton, of the nonprofit Neighborhood Housing Services of Los Angeles County, on May 19 for “Secrets of the Great SoCal House Hunt.”

The Pulitzers: This week’s Pulitzer Prize-winning authors include recent honorees at the Los Angeles Times Book Prizes: Poet Diane Seuss won for “frank: sonnets,” cited by the Pulitzer committee as “a virtuosic collection that inventively expands the sonnet form to confront the messy contradictions of contemporary America.” Ada Ferrer won for “Cuba: An American History,” a sweeping chronicle of the island nation and its complex relationship with the United States.” Andrea Elliott won in nonfiction for “Invisible Child: Poverty, Survival & Hope in an American City,” which follows a girl coming of age amid New York City’s homelessness crisis. Read more.

In the journalism awards, Los Angeles Times foreign correspondent and photojournalist Marcus Yam received the Pulitzer Prize for breaking news photography for his coverage of the fall of Afghanistan to the Taliban. The Times also was named a finalist in the breaking news category for its coverage of the accidental shooting death of a cinematographer on the set of the low-budget western “Rust.”

A California history: Acclaimed science fiction writer Kim Stanley Robinson says he’s done with deep-space narratives. His new book, “The High Sierra: A Love Story,” is Robinson’s first major work of nonfiction. “I decided it was time to go directly at the topic of climate change,” he tells the New York Times.

The antiques store behind ‘On Gold Mountain.’ Author Lisa See talks about researching her family saga and the journey to this month’s opera adaptation of her work at the Huntington Library’s Chinese Garden.

After a two-year hiatus, the Los Angeles Times Festival of Books returned — in a big way — to the USC campus on April 23-24. “It was a banner year,” says festival director Ann Binney, who shared a recap.

274 live events, from bands to book talks to poetry readings

706 volunteers, who helped keep it all running smoothly.

And book festivals are returning elsewhere this spring too, from the Bay Area Book Fest in Berkeley, to LitFest Pasadena, to next week’s debut of the Santa Fe Literary Festival.

“Letter to a Stranger” contributor and Los Angeles author Michelle Tea shared her writing inspiration and latest work as we count down to May book club night.

Your next adventure: Bringing my son to San Francisco, where he was born, next month.

The last book that kept you up at night: “Station Eleven.” I devoured it!

Something you discovered about yourself since the pandemic: I’m not nearly as social as I imagine myself to be. Or perhaps I’m just incredibly adaptable?

What’s not on your résumé (that says a lot about you): What college I attended, because I didn’t.

Your next project: My book “Knocking Myself Up: A Memoir of My In/Fertility” comes out this summer!

We’re looking forward to seeing everyone on May 26. Please share your questions for our travelers: What would you like to ask Michelle Tea, Maggie Shipstead, Pico Iyer, Colleen Kinder and Christopher Reynolds? Send comments in an email to bookclub@latimes.com.

And if you enjoy our community events: Please consider becoming a benefactor of the new Los Angeles Times Community Fund, which supports our community book club and annual book prizes.

As always, thank you for reading along and showing up every month. And please let us know what you think about the books we’re reading and what we should read together in the future.