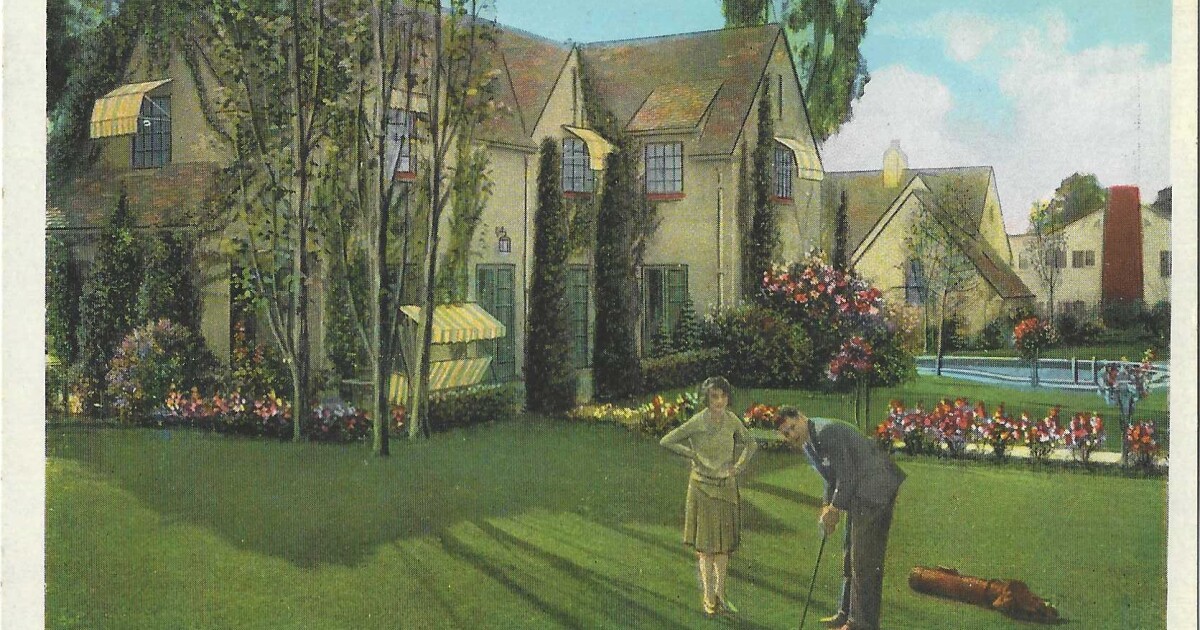 My lawn spoke to me the other day. At least, I think it did. I was sitting on the porch having my morning coffee when I heard a low moan coming from the ground before me.

The lawn did look like it could use a drink. We are in the midst of the worst Western drought in nearly 1200 years, so I haven’t turned on the sprinklers in a few weeks. I suddenly felt bad for the patchy brown lawn — the only sad yard on the whole majestically fecund block. I picked up the hose and gave it a squirt of cool water.

“There it is. Take it,” I said, quoting titan of industry, William Mulholland, who uttered those very same words more than a century ago at the unveiling of the Los Angeles Aqueduct, which funneled water from Owens Valley to the parched city so that it could grow into a modern behemoth.

His actions marked the beginning of an Icarus-style flight for water usage that is now resulting in a stunning fall into a very dry Lake Mead. In less mythical terms, perhaps more appropriate to this notoriously ribald metropolis, Los Angeles has been living a wet dream for the last 110 years, and it’s time to wake up.

Our city is in very real trouble as we face water restrictions and a blistering summer of misery marked by the threat of an absolutely explosive wildfire season.

Yet when I wander around various neighborhoods throughout the city, I encounter a sea of lush, green lawns. Sprinklers jet to life — watering the grass, the sidewalk, garbage bins, small dogs and whatever else they happen to be in spitting distance of. Runoff floods storm drains. The soundtrack to my journey is the ubiquitous buzz of a thousand weed wackers, trimming all that greenery into submission.

Those very same lawns are now studies in baroque excess. Landscape irrigation is estimated to make up 35% of the city’s water usage, which has gone up, not down, during California’s current megadrought.

There is a striking disconnect between the perils of climate change and Angelenos’ behavior in the face of it. Why?

A green lawn is fundamental to the foundation of the California dream — in large part because lush green lawns are baked into the DNA of Hollywood’s idealized image of itself.

Hollywood did not create this country’s desire for green lawns — that longing originated when wealthy Americans tried to replicate the resplendent gardens of French and English nobility of centuries past. Then Hollywood did what it does best: propagate the myth through relentless, omnipresent imagery. In this case, of ravishing lawns. They are an artifact from the city’s early 20th century film renaissance, a time when industry settlers imposed their will on the land, crafting it into picture-postcard perfection to be disseminated via celluloid to the aching masses.

Masses who went on to seed their own patches of green heaven in the blooming suburbias of post-World War II boom towns. These grassy oases became more accessible to Americans of myriad socioeconomic backgrounds, not just the 1%.

Vintage advertisements and films of L.A. brim with Mediterranean-style images of emerald-hued grass, electric-colored flowers and magnificent waving palm trees. Going West meant dreaming of grabbing a bungalow with a postage-stamp green lawn, a ranch house in the Valley with a modest yard, a mansion in Beverly Hills with a sprawling garden, a villa in Pasadena with acres of sweet green grass.

The Mamas & the Papas sang about it in 1965 when they lamented that “all the leaves are brown, and the sky is gray,” but that they’d be safe and warm if they were in L.A. In this case, the California dream is undoubtedly blue skies, the Pacific Ocean and waving palm trees. What is unsung, but inherent in that potent imagery, is what you’ll find at the base of just about every iconic palm in the city — a bouncy bed of vibrant grass.

A green lawn defines how many residents in Los Angeles view themselves and their city. Without an abundance of lawns, we would have — as a publicist might say — an image problem. We’d be a Pink’s hot dog without a bun. Hollywood without the Hollywood sign. Santa Monica without a pier.

Perhaps it’s fitting that much is now being made of the pending death of the Hollywood empire at the same time that one of its most lasting legacies — the archetypal image of the perfectly manicured lawn — is also dying.

If green lawns remain a national aspiration, which they undoubtedly do, then Hollywood fed that craving by reflecting the country back to itself as only Hollywood can do. The lawns of Hollywood lore are often romantic — a symbol of wealth and plenty. But darkness lurks beneath all that maniacal perfection.

As a cipher of pop culture, Hollywood can’t be beat. One of film’s most apt depictions of the perils of Hollywood-style excess can be found in John Schlesinger’s 1975 film “The Day of the Locust,” which opens with a shot of a sprinkler spinning drowsily on the trimmed front lawn of the San Bernardino Arms bungalows while a bottle blonde paints her toenails in the honeyed sunlight.

In this case, what looks idyllic at first blush soon turns nightmarish. Upon closer examination, that blonde is deeply troubled, those bungalows are falling apart, the sprinkler is cheap and lawn is raggedy. By the end of the film, the city is in chaos.

Nathanael West knew when he wrote the original book in 1939 that L.A.’s manicured charm is an artifice cloaking a pathologically self-indulgent core with apocalyptic instincts. What are green lawns in the face of a megadrought if not the ultimate self-indulgence?

The verdant decadence persists in the face of an inescapable reality: we are literally running out of water. Yet so many residents can’t bring themselves to xeriscape, to replace their grass with sustainable vegetation. To do so would be to change the very character of this city. To admit we are not Eden. To embrace our fiery, ash-choked, arid, drought-plagued present. Many Angelenos will water their lawns until the hills burn down around us. It’s very ancient Rome.

It’s also very Hollywood. This has never been a city to age gracefully. We are known for tearing down our historic buildings without fanfare — replacing them with parking lots or soulless big-box stores. We Botox ourselves beyond recognition rather than embracing the inevitable wrinkles time brings. We cling to — and propagate — images of perfection in magazines and on screens, even when they are in direct conflict with our emotional and physical health.

But the climate is changing — like it or not — and our city must change with it. We can create CGI lawns in postproduction if we need vast lawns for period films, but we’ve got to start replacing our own lawns with buckwheat, sage, coyote brush, toyon and succulents. The city, will in fact, pay you to do just that through the Metropolitan Water District’s Turf Replacement Program, which pays $2 a square foot for up to 5,000 square feet of lawn converted to approved “water-wise” uses in residential yards.

I’ll admit that it’s strange to picture L.A. without all the green. And artificial turf doesn’t feel quite right — I walked by a plastic lawn the other day, and it looked as cheap and garish as the site of a beer pong competition. It may also seem odd to not have the comforting appeal of a leaf of grass, which Walt Whitman described as “the journey-work of the stars.”

But the more lawns we replace with sustainable agriculture — and the more we put those images on film — the more accustomed we will become to the necessary new normal. A new normal that was the only normal for centuries of Indigenous people who treated this land with the dignity and respect it deserves long before Hollywood moved in.

For inspiration, look to the Huntington Gardens in San Marino — which is among the most filmed landscapes in the city, appearing in innumerable movies and TV shows. Viewers usually see its vast green expanses, but it also has a thriving California Garden that reflects the needs of the local climate. The Huntington opened in 1928, that garden was built in 2015. A sign of the times, if ever there was one.

These native plants will not only be immeasurably better for our ecosystem. They will look far superior to the cracked dirt and yellow patchy grass that will remain when we push the limits of our habitat and are no longer allowed to irrigate our yards at all.

And take note, Hollywood — they will photograph far better, too.