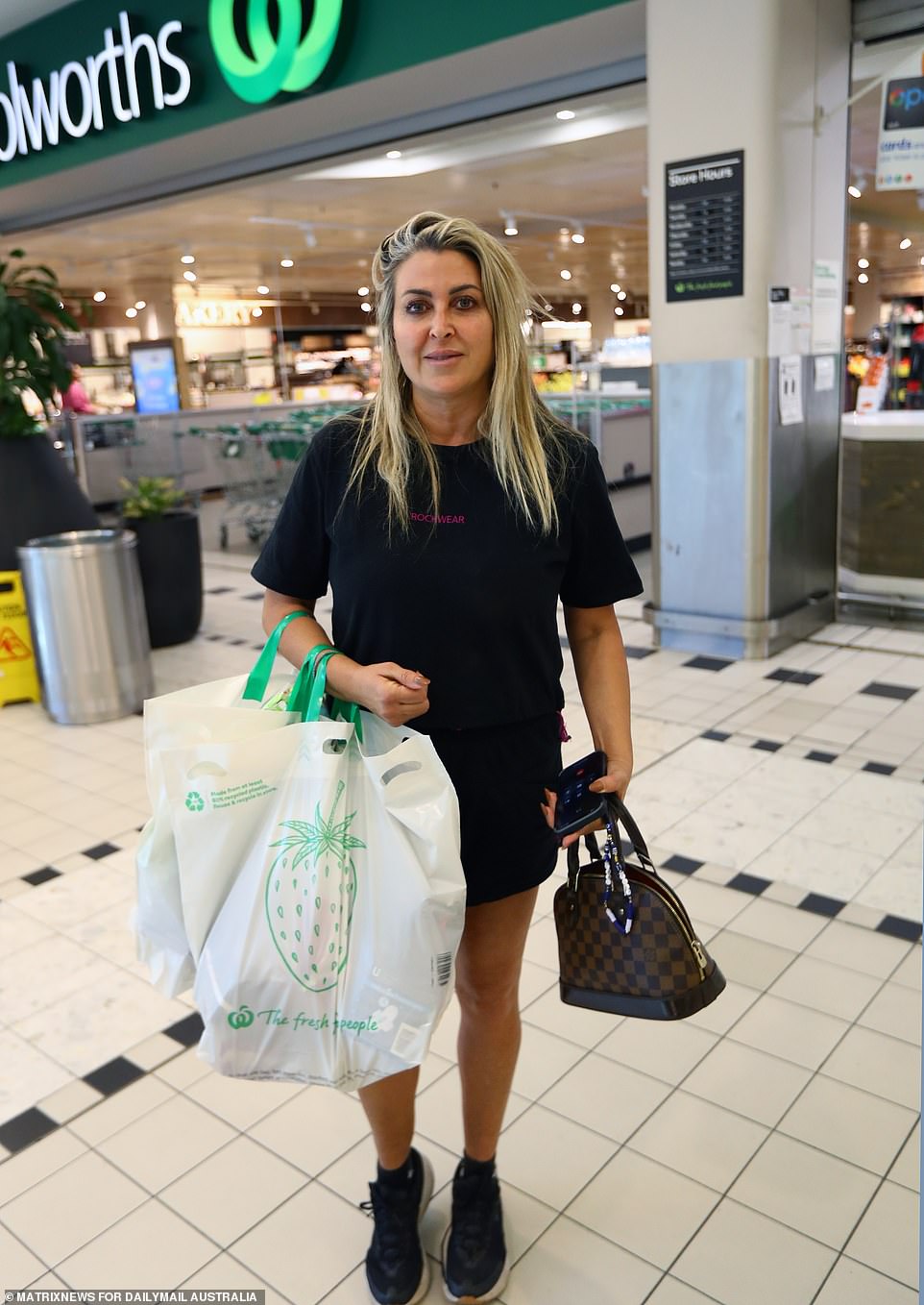 Australians’ grocery bills have doubled as inflation surges at the fastest pace in two decades and actual inflation could be much worse than what the official figures say.

A small shop that used to cost just $40 is now typically adding up to $100, with the Reserve Bank expecting inflation to accelerate even more by Christmas.

A leading consumer price audit of supermarket prices found some items had doubled during the past year, with a prices for a popular soft drink surging by 94 per cent.

The first interest rate rise in more than a decade is squeezing household budgets, with borrowers paying off a typical $600,000 mortgage facing a $700 surge in their monthly mortgage repayments within a year.

Now prolonged lockdowns in China are expected to push up the global price of imported goods, making the hip pocket pain even worse and that’s set to send millions of Aussies broke.

Electricity prices are also expected to increase by $273 a year for a family of four following a doubling of national wholesale prices during the past year.

Little wonder Australians are nervous with a Westpac-Melbourne Institute monthly consumer sentiment survey for May showing financial anxiety back at levels last seen in August 2020 when Melbourne went back into lockdown.

Australians are paying $400 for their groceries as inflation surges at the fastest pace in two decades. Pictured: Woolworths customer Monique 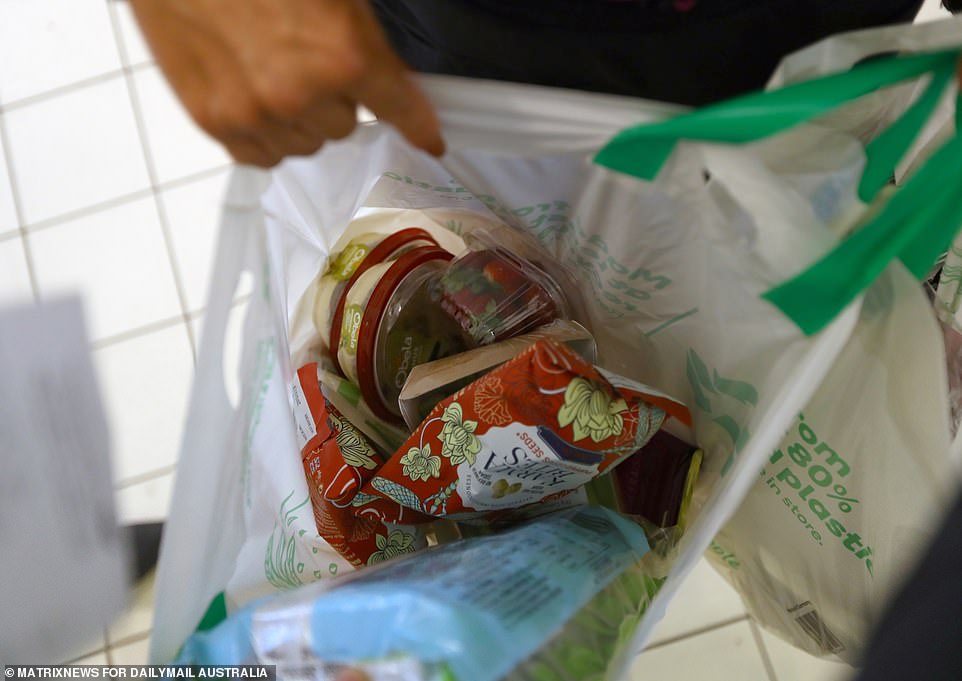 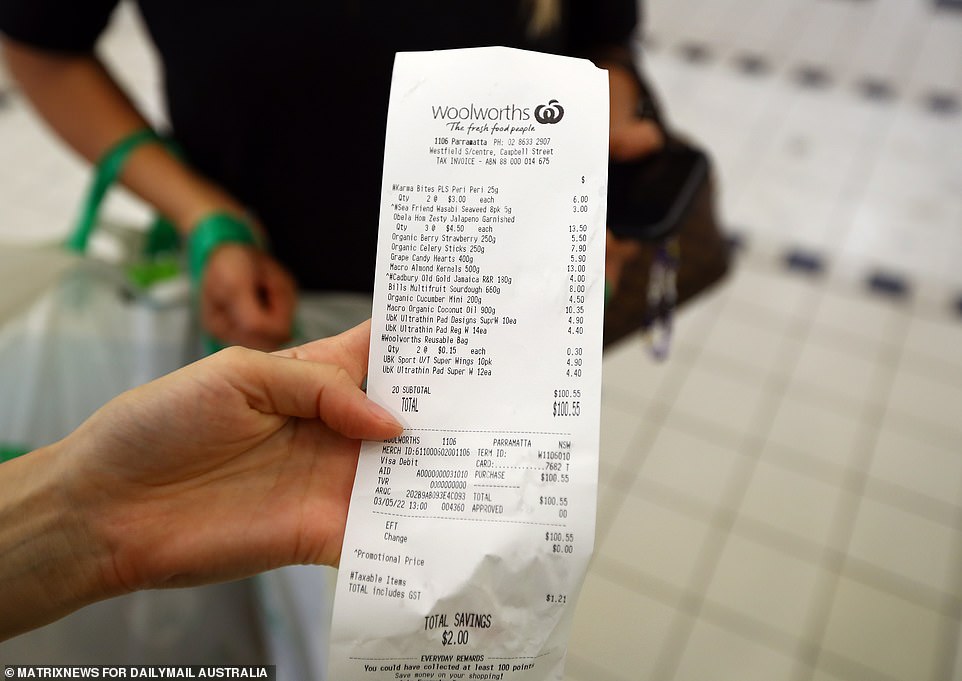 Woolworths customer Monique’s grocery bill added up to $100.55 for ‘just a small shop’, which not long ago would have cost $40.

‘Honestly, I’m dying. It was just a small shop,’ she said.

‘There was nothing, just some snack food – chips, chocolate, strawberries.

‘I didn’t even get the other essential goods.

A fuller trolley would now cost Monique close to $400.

Her concerns about grocery prices doubling, despite what the official inflation figures say, is backed up by consumer group One Big Switch, which in March revealed some items at supermarket giants Coles and Woolworths had increased by up to 94 per cent in a year.

Two-litre bottles of orange Fanta sold at Coles had the biggest increase, with prices almost doubling from $2.35 to $4.55.

Married couple Nour and Michael said rising consumer prices and weak wages growth had stopped them from buying a home.

‘There’s not even a chance for us to think about it,’ Nour said. 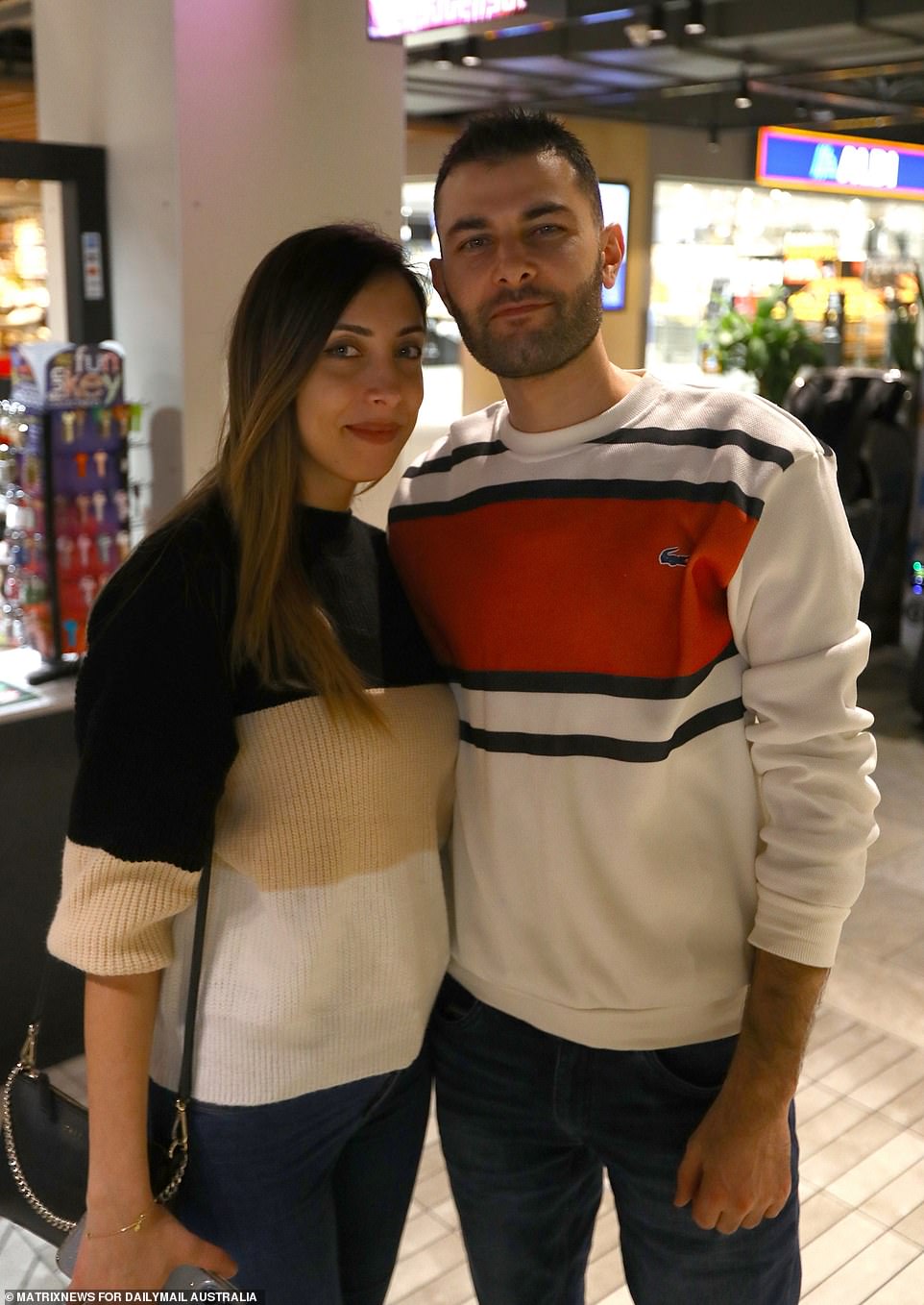 Michael said they had friends who were at risk of losing their home after recently buying as the market was peaking.

‘I know a lot of people whose extra $50 makes a huge difference at the end of the month,’ he said.

‘I always wanted to buy, but whatever money you have doesn’t take you that far anymore.

‘Now I see it like a life sentence in the sense that if the interest rate goes up 0.25 per cent you’re at risk of losing your house.’

A surge in property prices last year, when Reserve Bank of Australia interest rates were at a record-low of 0.1 per cent, has locked many young people out of property.

Even in a slowing market, Sydney’s median house price surged by 17.1 per cent in the year to April to an even more unaffordable $1.417million, CoreLogic data showed. 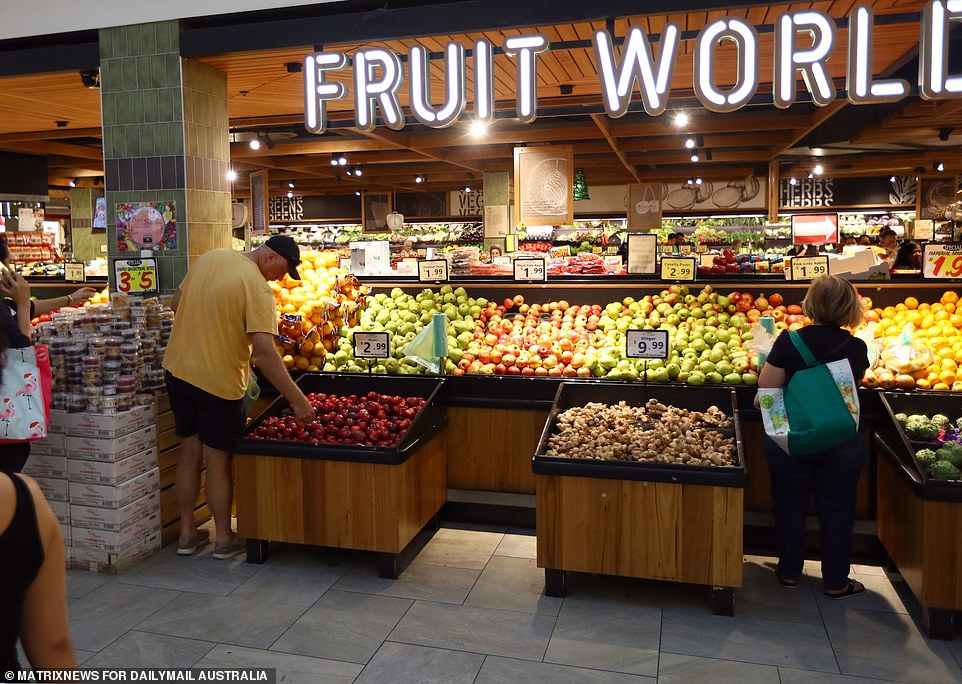 A closer look at the Australian Bureau of Statistics consumer price index data showed fruit and vegetable prices soaring by 6.7 per cent, following floods along the east coast

The May rate rise of 0.25 percentage points – the RBA’s first increase since November 2010 – will be far from the last with Westpac and ANZ now expecting the cash rate to hit 2.25 per cent by May 2023 for the first time in eight years.

Should interest rates rise seven more times during the coming year, a borrower with a typical $600,000 mortgage would see their monthly mortgage repayments climb by $713 to $3,019.

When inflation is above the RBA’s two to three per cent target, interest rates are more likely to keep rising.

Headline inflation in the year to March surged by 5.1 per cent, the fastest annual pace since June 2001 in the year after the GST was introduced.

The Reserve Bank is expecting inflation to hit 6 per cent by the end of 2022, a level that would be double the September 2021 pace of 3 per cent.

A closer look at the Australian Bureau of Statistics consumer price index data showed fruit and vegetable prices soaring by 6.7 per cent, following floods along the east coast.

The price of meat and seafood rose by 6.2 per cent over the year, more than double the 3 per cent increase in bread and cereals.

Tina Khan said buying the ingredients for an Italian rice dish to feed a family of five pushed her grocery bill into the three-digit figures.

‘Today I was just getting ingredients to make my son risotto,’ she said. 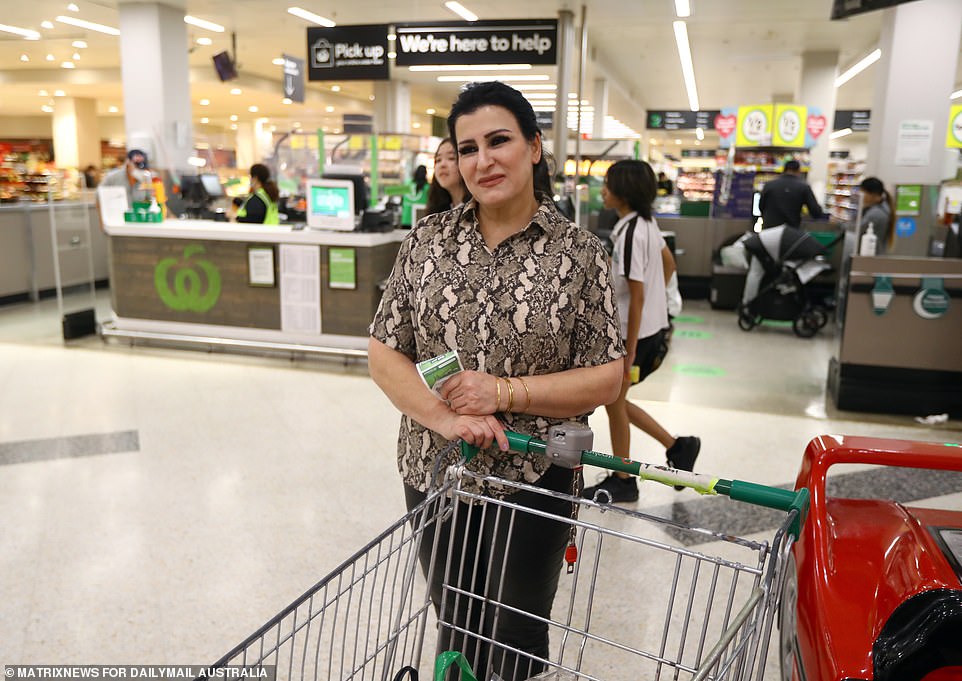 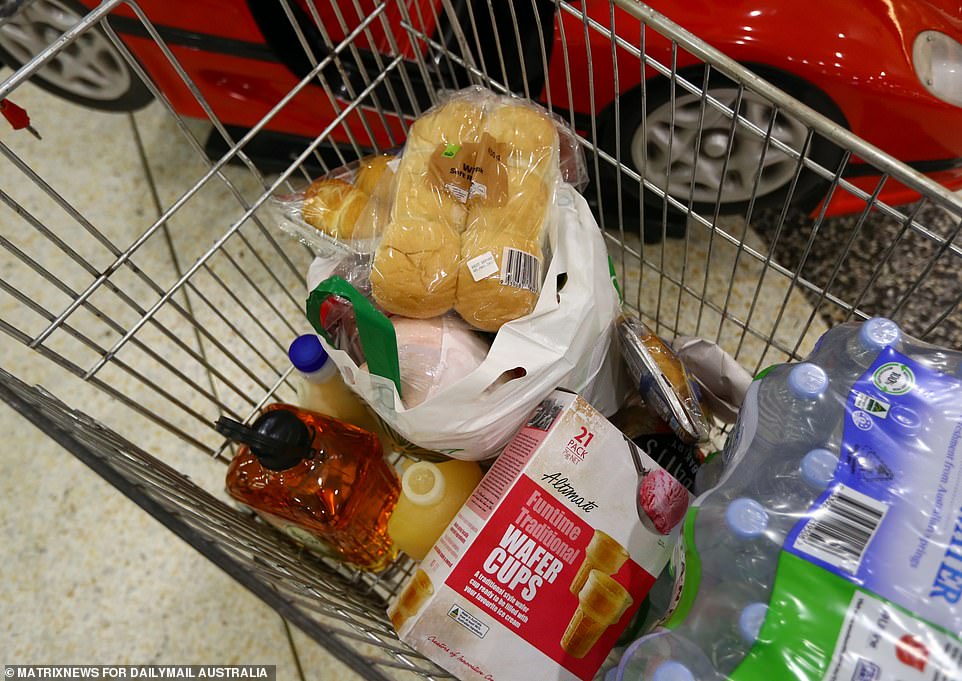 Tina said she bought just items, like cooking oil, bread, risotto rice, and bottled water, that she could only get at supermarkets 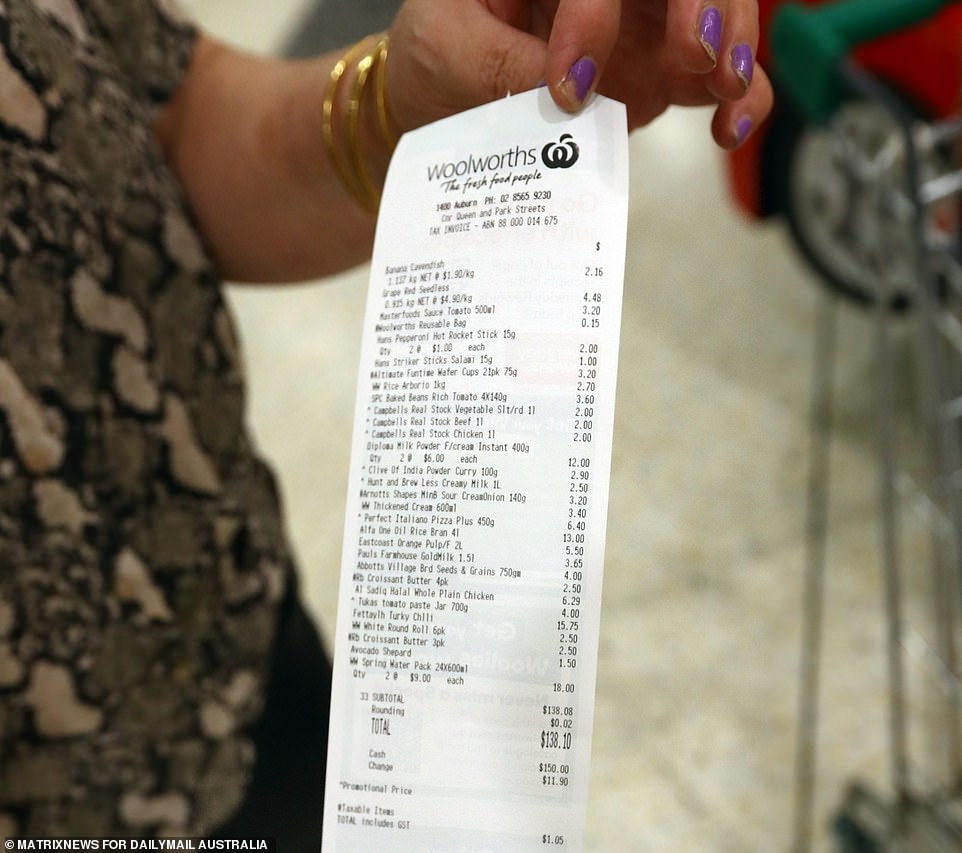 Ms Khan has even tried buying her fruit and vegetables in bulk to save money.

‘I pay a lot a week because normally every one or two days I go grocery shopping,’ she said.

‘Each shop does not have everything I need. I didn’t buy any vegetables. I still need to get the vegetables.’

Ms Khan now has to shop three or four times a week to keep her grocery bill down.

‘Today I didn’t find any nice fresh vegetables here so I might go to another suburb,’ she said.

‘Before I used to go to one place to do my shopping, but now things have changed. 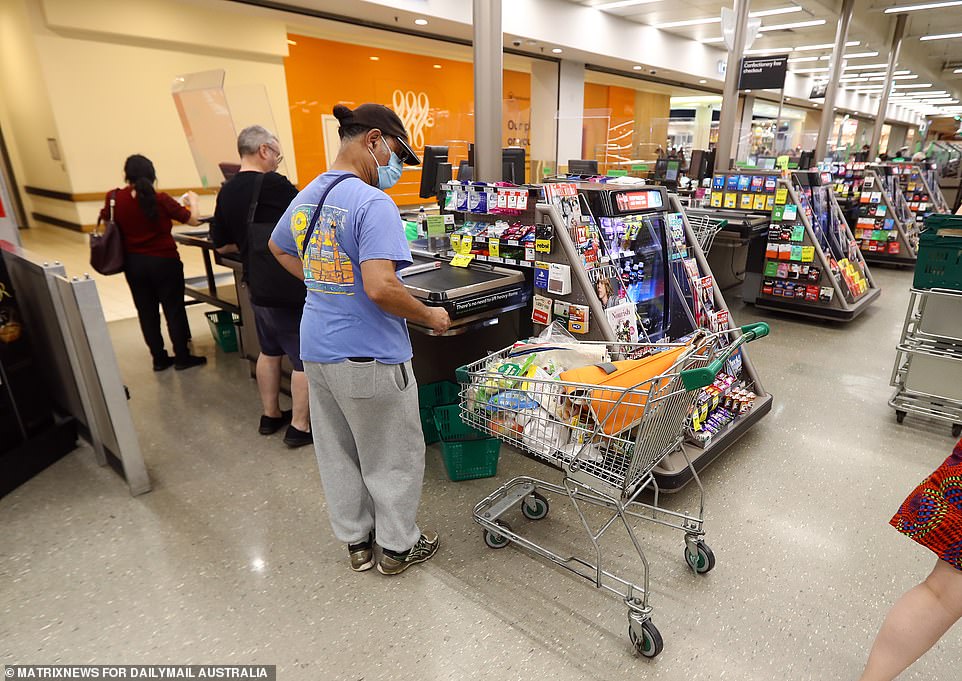 How YOUR mortgage repayments could surge under a 2.25 per cent cash rate

Calculations based on variable mortgage rates rising from 2.29 to 4.44 per cent in line with the cash rate increasing by 2.15 percentage points from a record-low of 0.1 per cent to 2.25 per cent

Sharla said she only does ‘little shops’ to ensure she uses up all her groceries before buying more.

‘Normally my trolley would be fuller,’ she said outside a Woolworths store.

‘I go shopping two or three times a week just to buy what I need so there is no wastage.

‘This shop was just vegetables, and it was about $80.’ 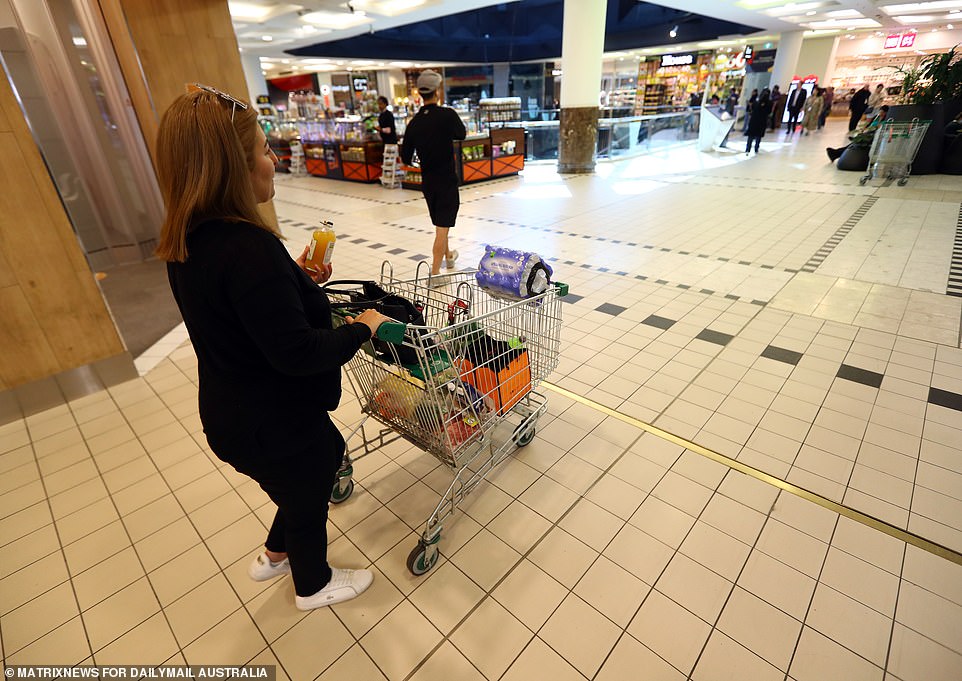 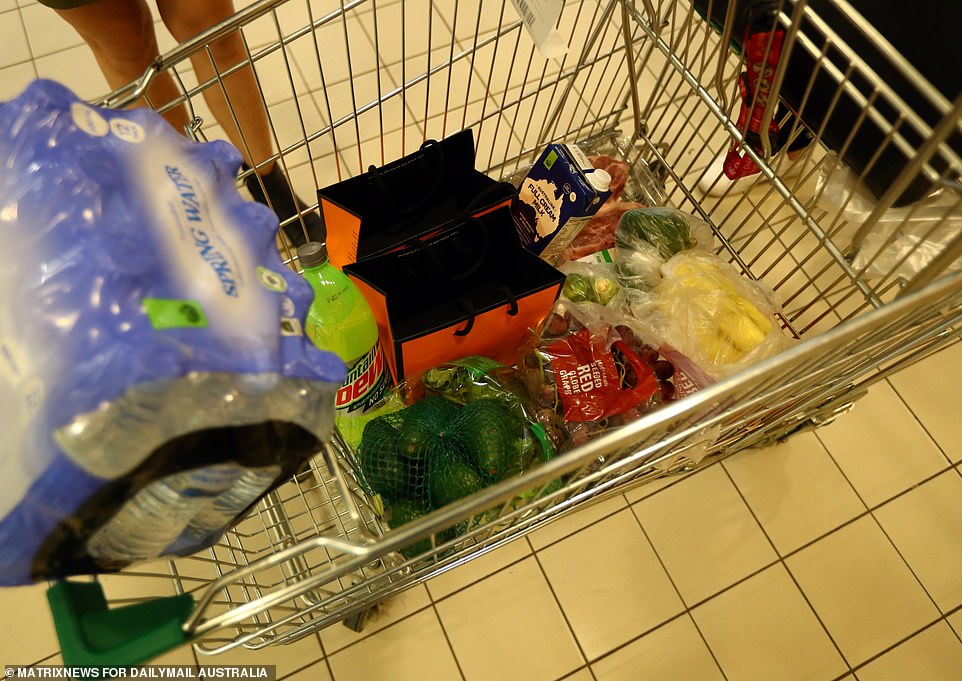 Margaret, an aged pensioner, has also been forced to shop around to nab the best prices.

‘I figured out in my brain how much I had to spend and I spent accordingly.’

Margaret said $22 bought her four meals from Coles, with much of the bill paid for by some sheer good luck.

‘I’ve got baked beans and spaghetti in there, little tins. That was only $5 worth. So that’s less than $2.50 for a meal on toast,’ she said. 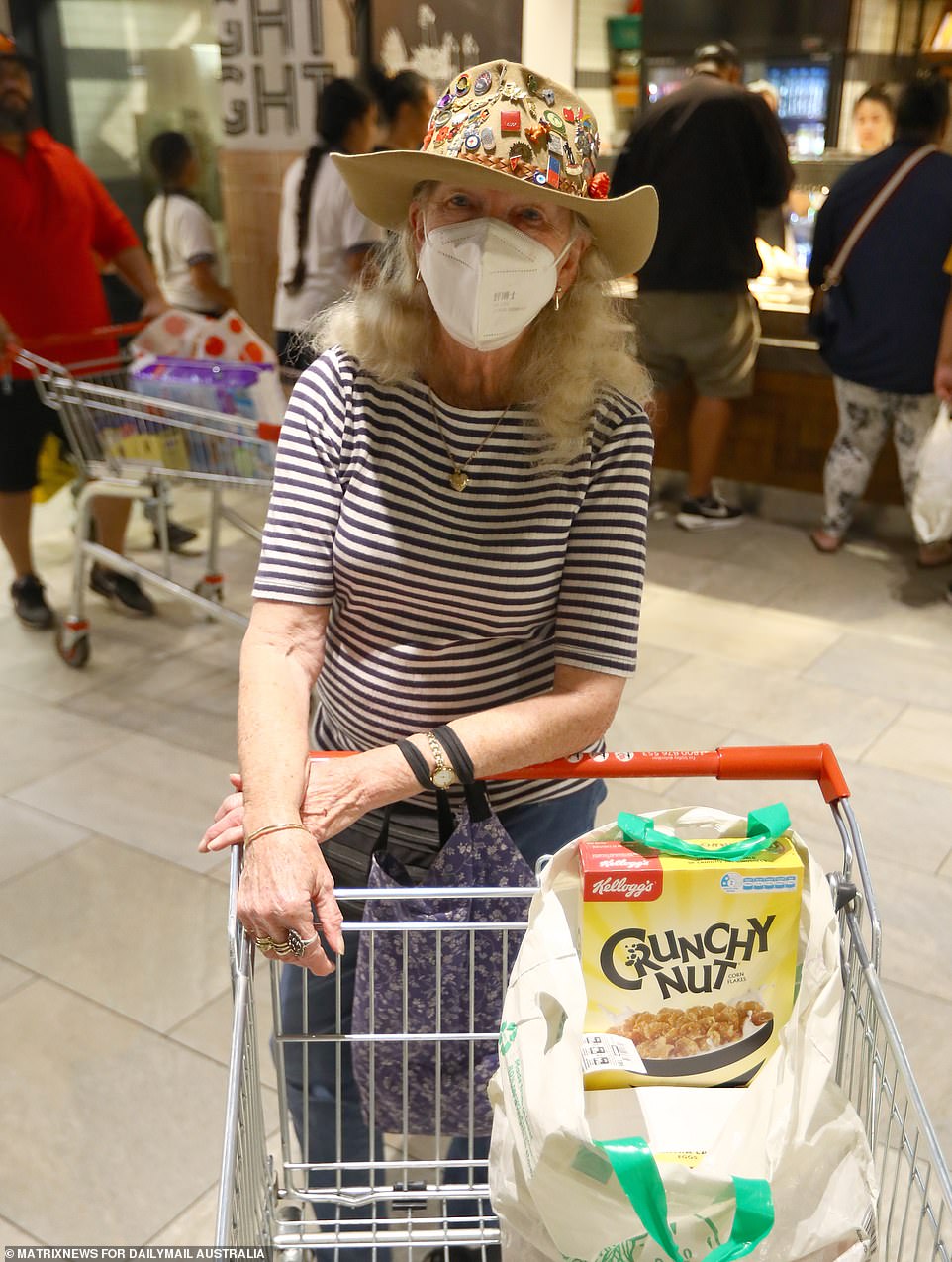 Margaret, an aged pensioner, said she shops around to make her money stretch for groceries 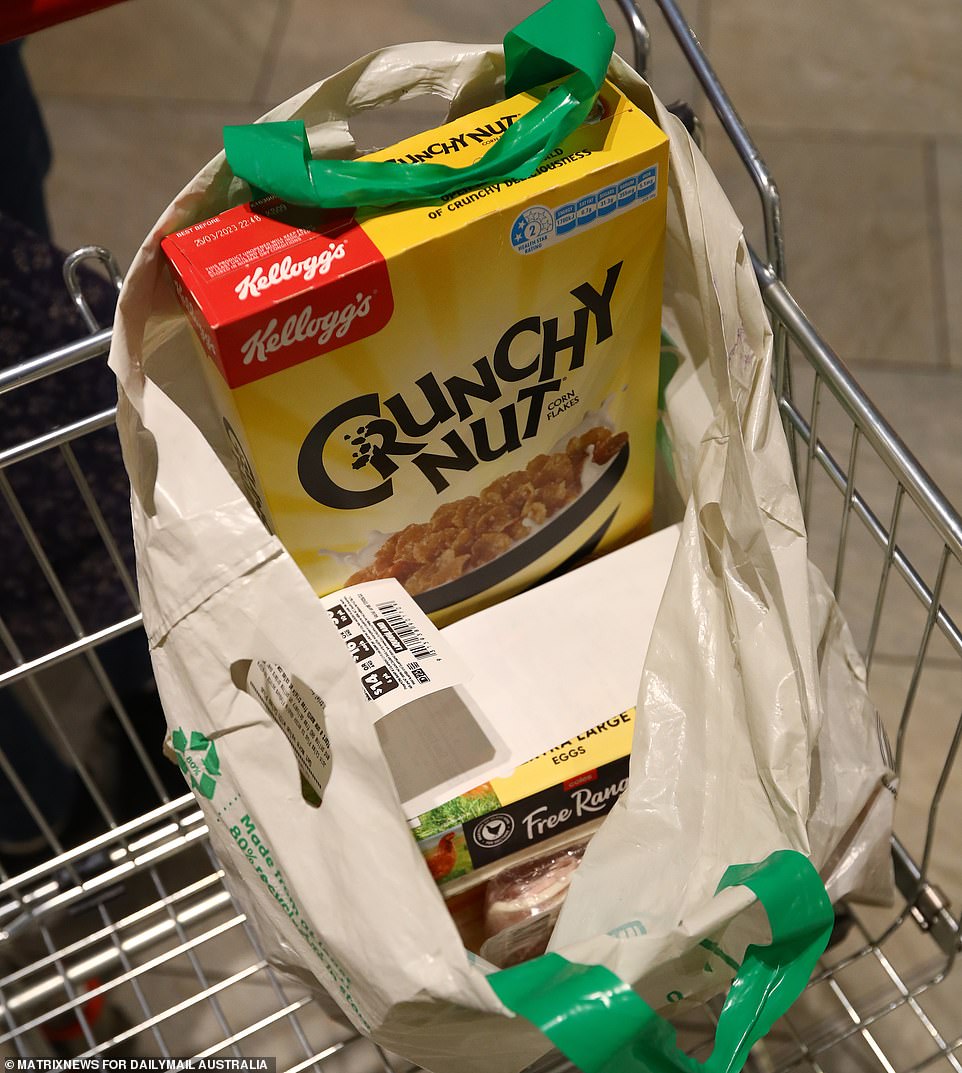 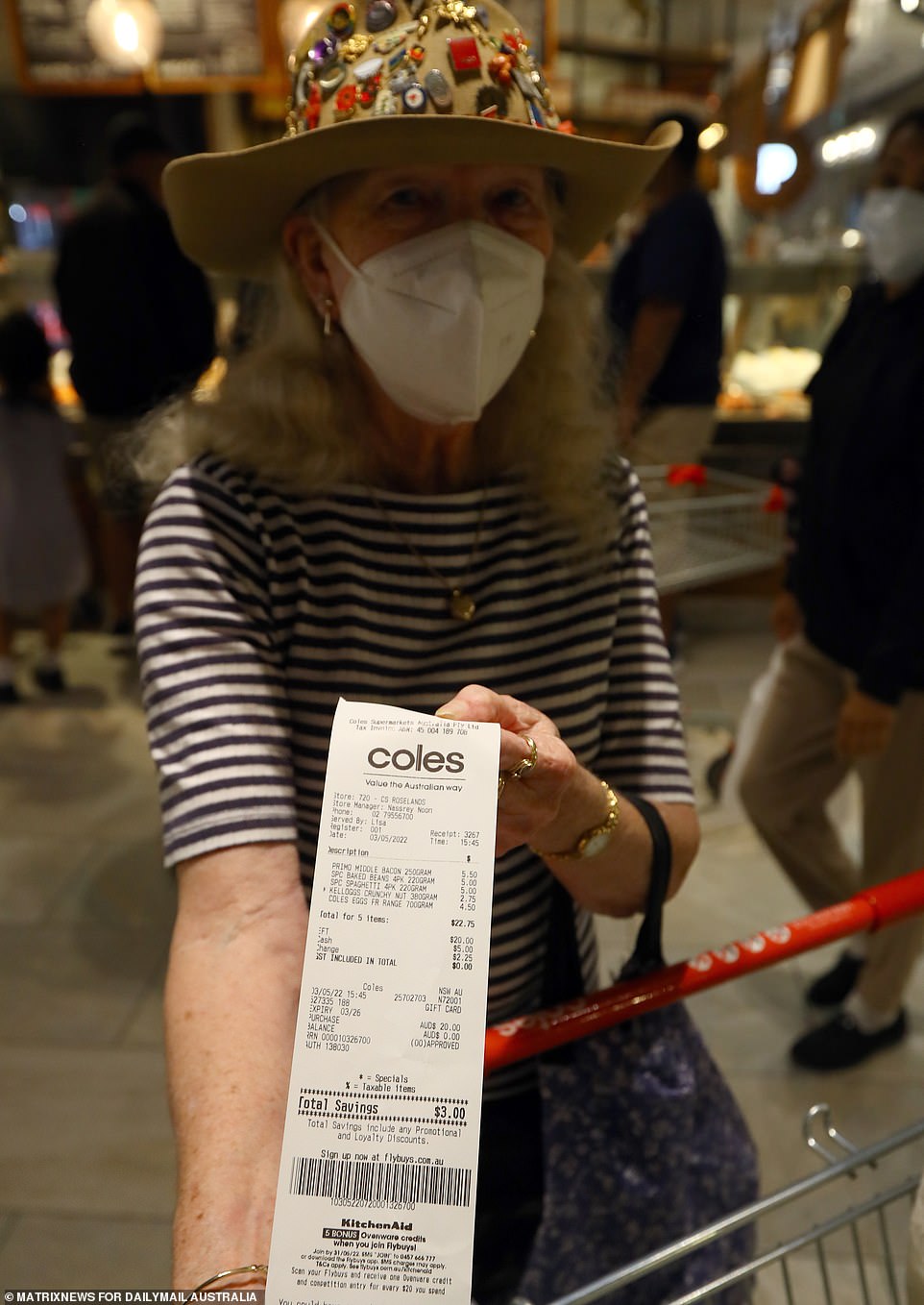 Bronwyn, an aged care worker, does shopping for seniors.

She said many of her clients were struggling to afford basic necessities.

‘People can’t even afford to buy food. They’re on the pension, they’re paying rent, and they’re not even buying food. They are living off tin stuff.

‘And I think they are getting that from support services – they aren’t even buying that.’

Bronwyn said she had just completed a grocery trip for a client who is better off financially than others she works with but the woman still could not afford fresh meat on her budget.

‘This shop is two weeks worth of groceries and was like $297, but this is only veggies and bread. There is no meat – only three slices of ham,’ she said.

While he is not affected by rising interest rates as his mortgage is paid off, he said he worries about younger generations.

‘I feel sorry for my grandkids and kids who are struggling with mortgages,’ he said. 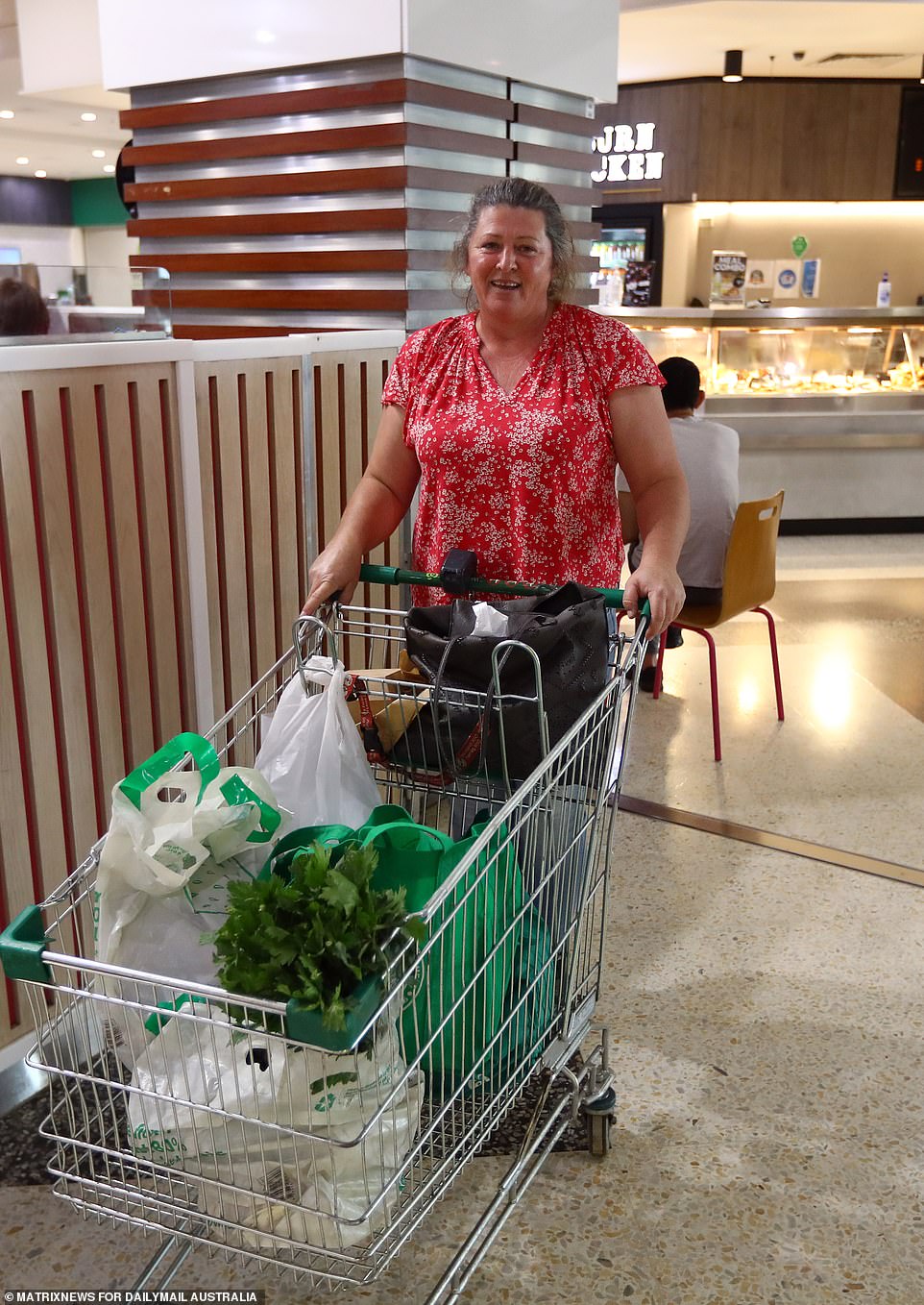 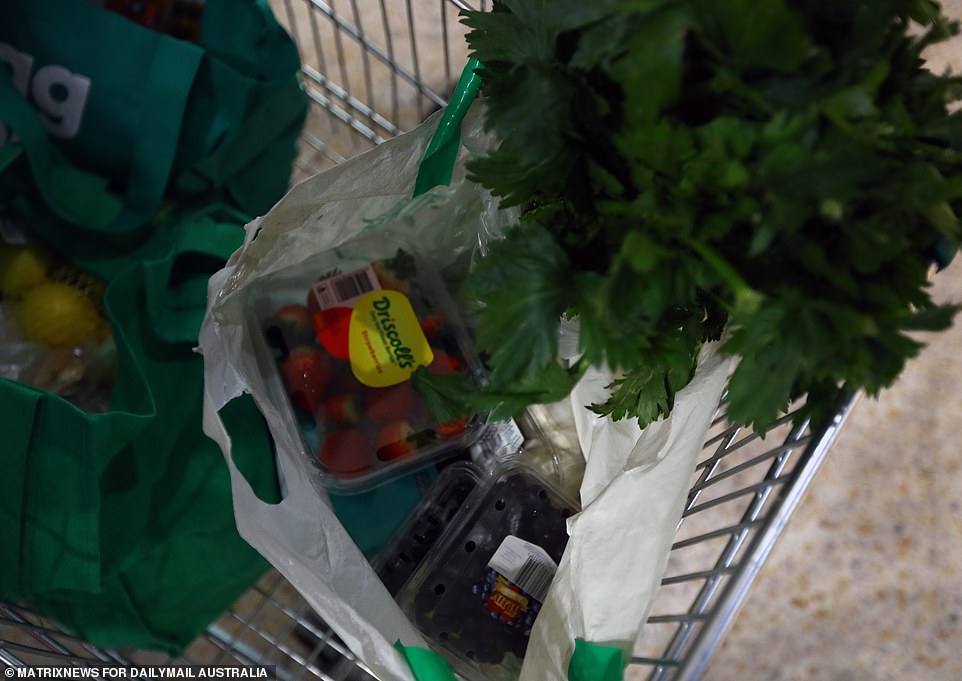 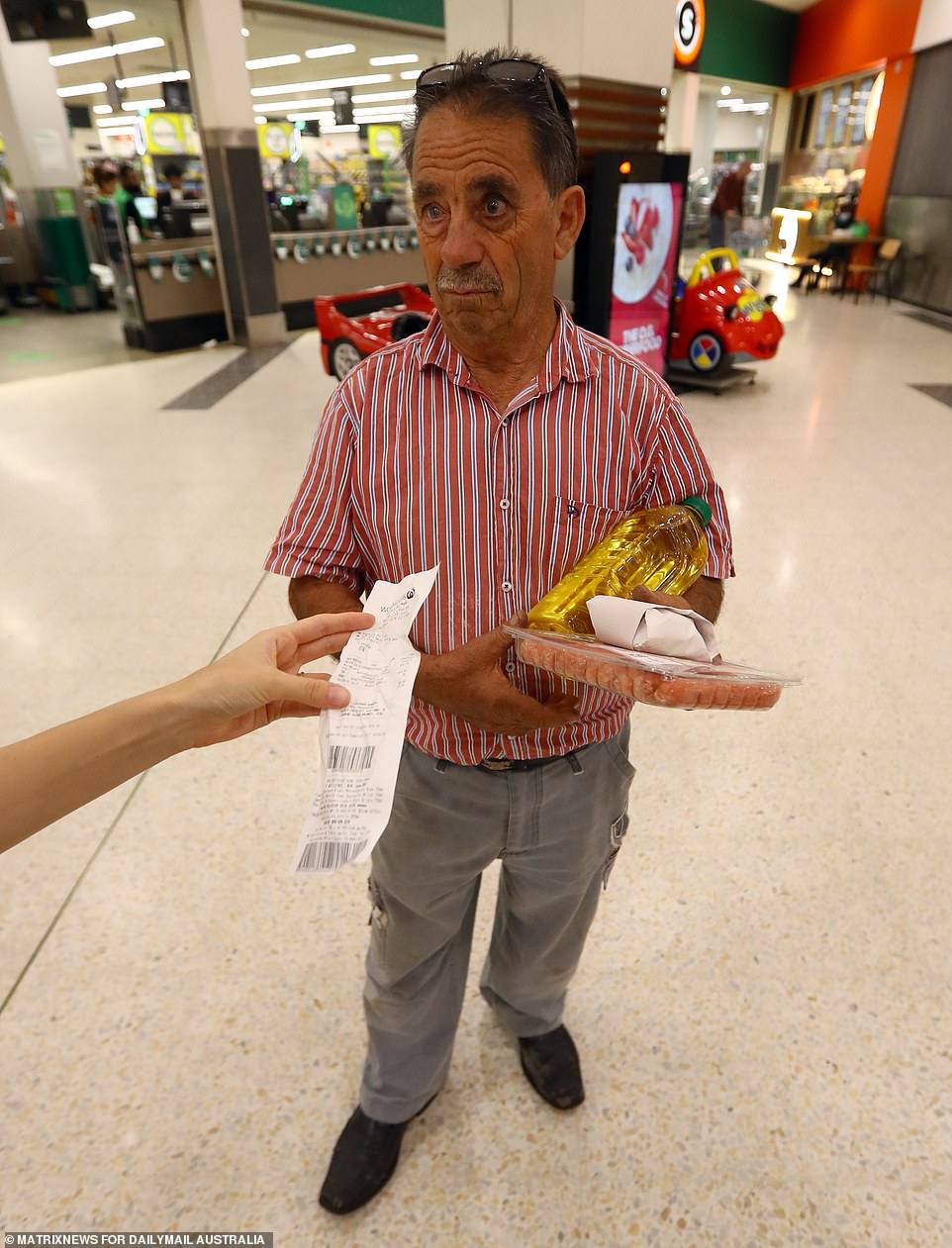 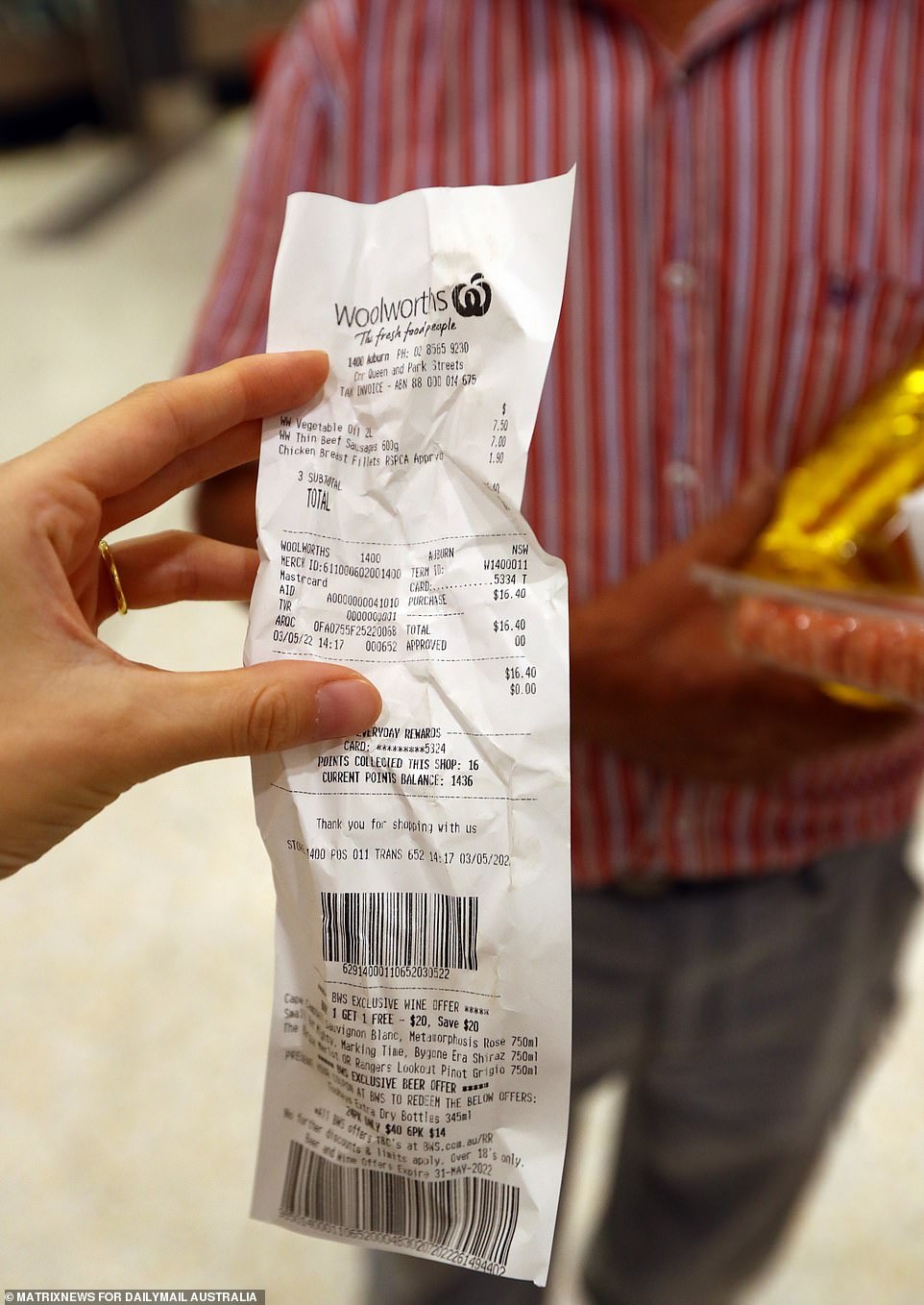 Michael Watson is in a similar situation.

‘We don’t have a mortgage to pay off anymore, so we don’t have any sort of issues as far as the overall cost of living is concerned on the bottom line.

‘But I sympathize with everybody with the way things are going. My nephew bought a home a few years ago and interest rates are going up.’

Electricity prices are also set to rise with the Australian Energy Market Operator noting wholesale prices had more than doubled to $87 in the March quarter – rising by 141 per cent in a year.

Wholesale prices make up about 30 per cent of a power bill. 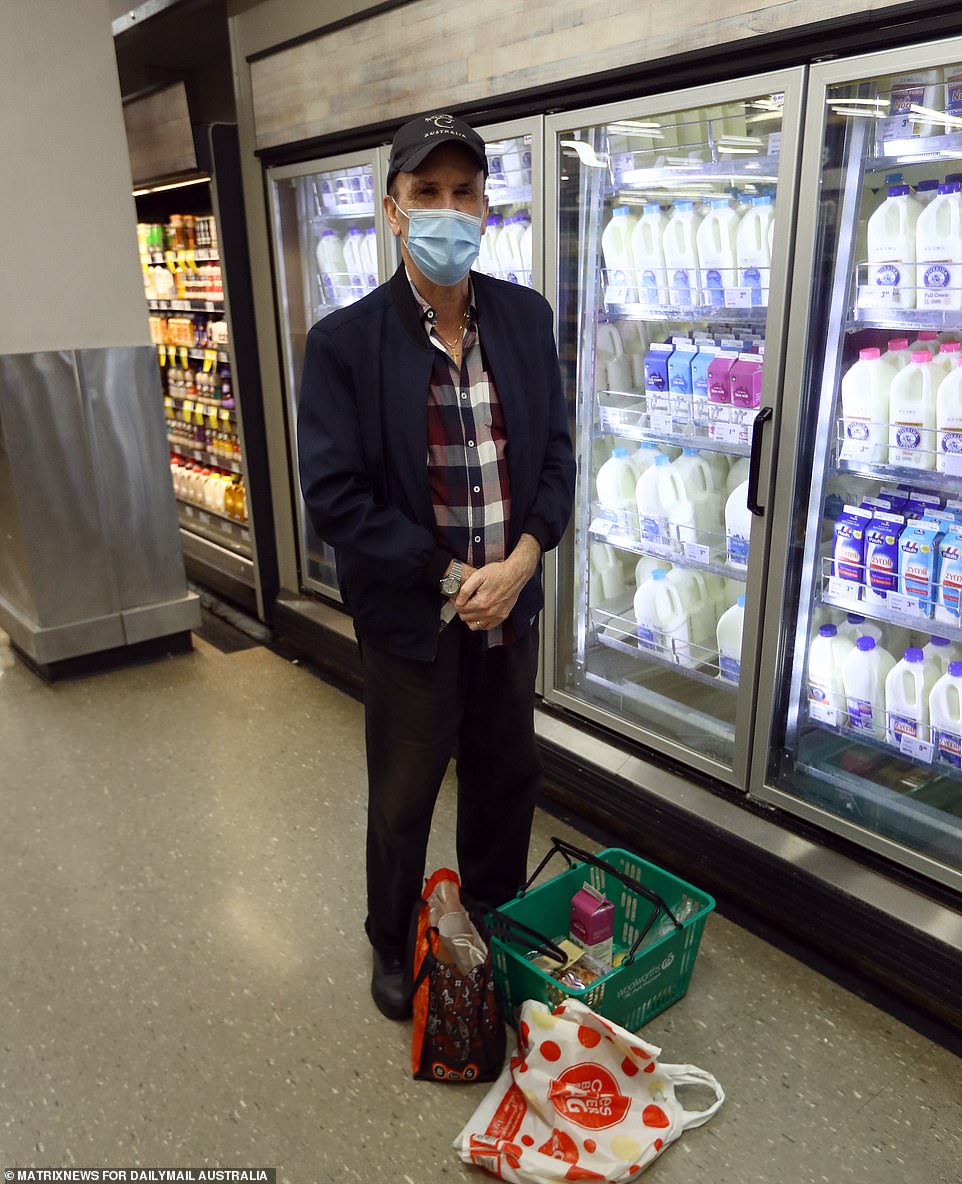 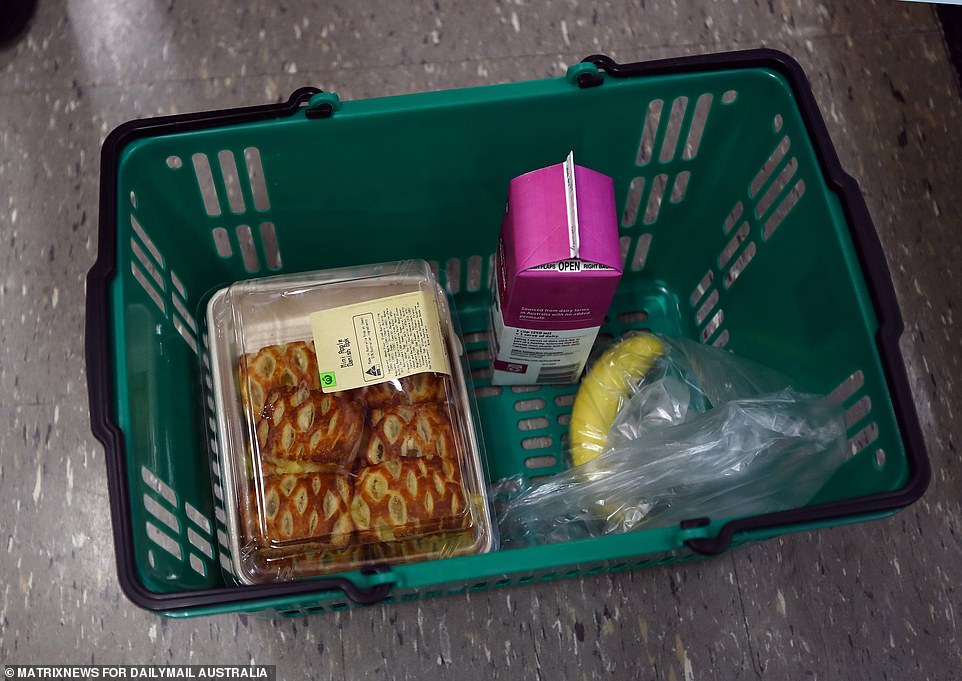 Although he said he has noticed the cost of goods going up, he and his wife have not been greatly affected

One Big Switch campaign director Joel Gibson said that would mean a 28 per cent annual increase of $273 for a family of four using 3,900 kilowatt hours of power a year.

‘If you’re not prepared to shop around and switch this year, your power bill could end up ballooning by hundreds of dollars, on top of groceries, petrol and mortgage increases,’ he said.

ReAmped Advance had the cheapest electricity in Sydney, data from the federal government’s Energy Made Easy website showed.

Customers however have received emails advising that usage rates would rise by 43 per cent from May 24.

‘Energy prices are expected to skyrocket,’ she said.

If that wasn’t bad enough, strict lockdowns in Shanghai as part of China’s Covid-zero policy are set to push up the global price of key consumer goods, from Apple iPhones to furniture.

Credit ratings agency Fitch said that with China accounting for 15 per cent of global merchandise exports, consumers across the world would suffer as lockdowns stopped drivers taking goods to ports. 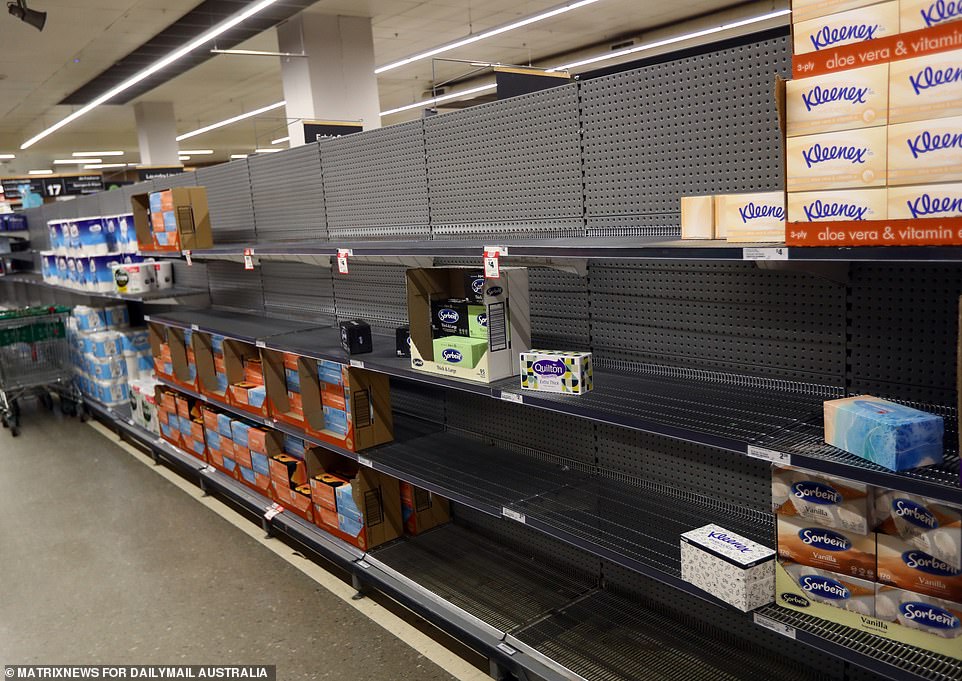 Headline inflation in the year to March surged by 5.1 per cent, the fastest annual pace since June 2001 in the year after the GST was introduced

‘The lockdown in Shanghai will exacerbate global supply-chain pressures and inflation concerns,’ it said.

On top of that, a shortage of semiconductors from Taiwan is already delaying the production of cars and a range of electronic goods requiring computer chips to function.

The Westpac-Melbourne Institute consumer sentiment index for May produced a score of just 90.4 points – a level well below the 100 level where optimists outnumber pessimists.

The survey of 1,200 people produced the worst monthly reading since August 2020 when Melbourne went back into a prolonged lockdown.

‘Consumers are aware that the Reserve Bank plans to continue increasing the cash rate for some time,’ he said. 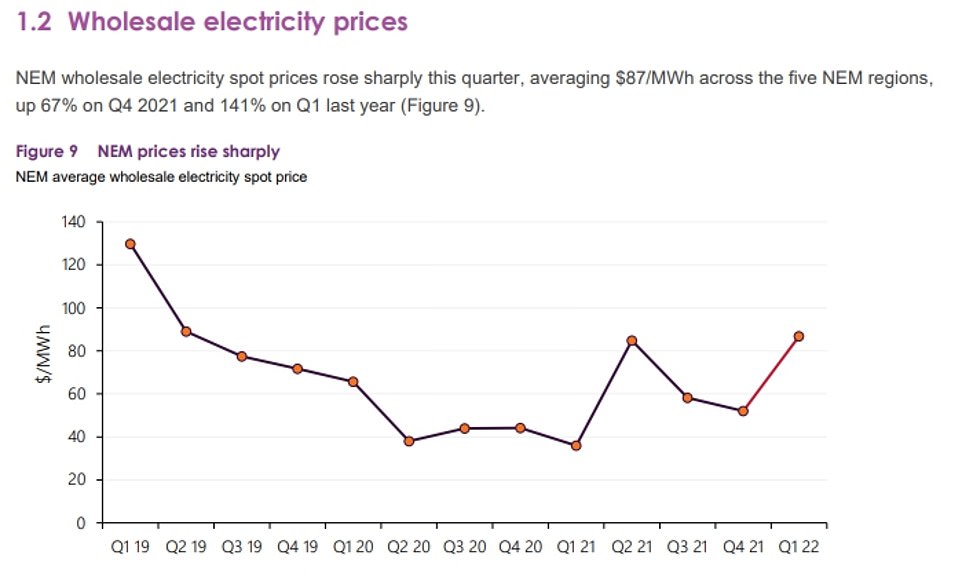