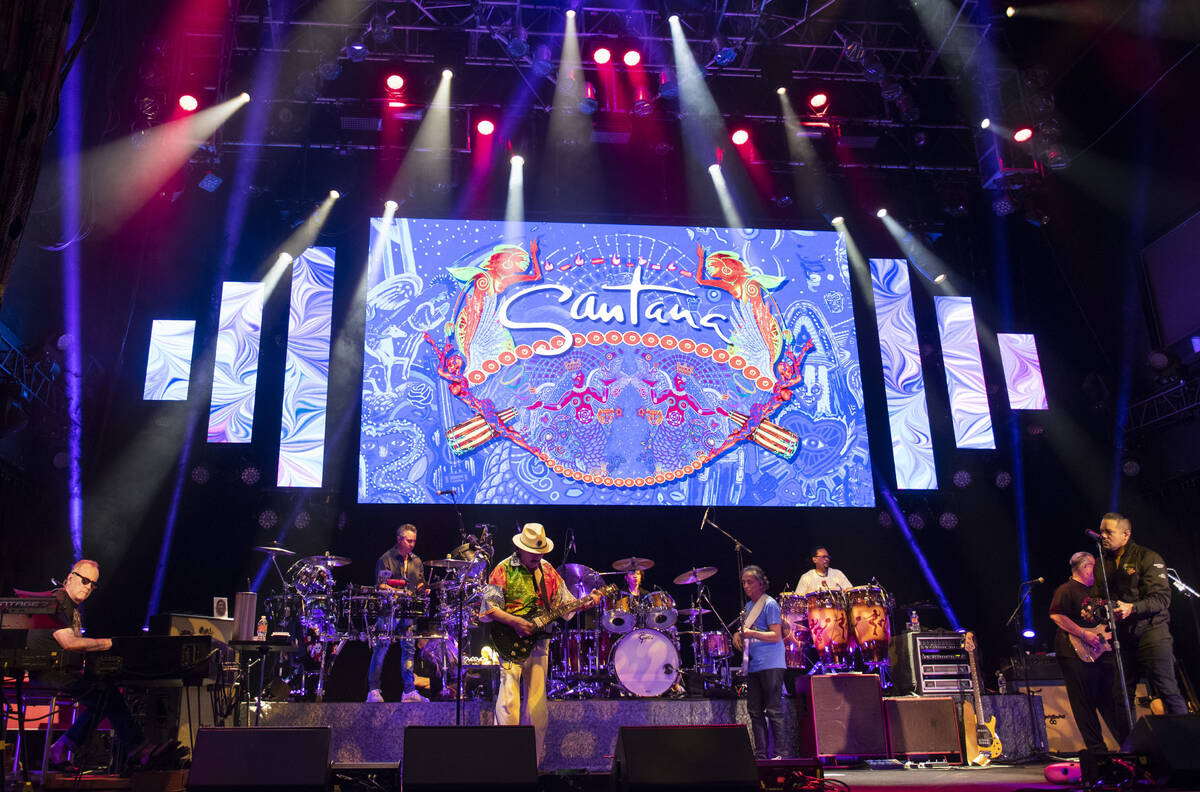 To know how Carlos Santana feels, check his performance schedule.

He feels well enough to rock House of Blues at Mandalay Bay for another four years. At least. At age 74, Santana is ever-thankful to still rock ‘n’ roll, even as some of his contemporaries are gearing down.

“I am working with a trainer, and we are working on my balance, equilibrium, confidence,” Santana said. “We work on how to breathe correctly. I have changed my diet, exercising, walking. I want to be around for a while, probably past 90, still doing what I love to do in such a way that it means something.”

Overcoming health concerns and buoyed by a spirited new album, Santana has announced an extension of his House of Blues residency through May 2026.

Santana announced the extension in a multifaceted event at House of Blues on Wednesday, marking his 10th anniversary at the venue and also his return to the stage. The rock legend had a stent placed in his heart during emergency surgery in late-November, halting his shows in December. He then called off four shows from Feb. 2-6, three for COVID cases in his band, and another because the rock star suffered food poisoning.

So when Santana says he’s grateful to be back in action, believe it.

“I am feeling really strong,” Santana said in an interview after the event. “My heart is back to normal, whatever that is. I feel really happy, because my body is very resilient. I can present myself with competence.”

Santana is returning through the end of May at House of Blues. He’d earlier announced dates in September and November.

The guitar great accepted a Clark County Icon Award (yet more hardware for one of his trophy cases), honoring his long tenure at House of Blues. Las Vegas local artist Justin Lepper presented him with a guitar art work.

Steve Gold of Peace of the Stage, who owns the actual stage from the 1969 Woodstock festival, was also on hand to announce that pieces of the stage will be sold at Santana’s shows. Proceeds will go to Jose Andres’ World Central Kitchen international relief campaign, Feed The Children, WhyHunger and the JDRF juvenile diabetes campaign in Las Vegas.

Looking fit in a multicolored shirt, white-linen pants and white fedora, Santana was in an ebullient mood in his first appearance at House of Blues since January. At one point during his formal presentation, he closed his eyes and touched his nose, as if to prove he could still do that.

Later, he and the band tore through a five-minute instrumental performance as part of their sound check for the upcoming shows.

Santana said he’s performing “Move,” his latest collaboration with Rob Thomas, from “Blessings and Miracles.” He’s also returning a great but nearly forgotten song from the 1981 “Zebop” album, “Winning,” to the set list.

Ray Greene, late of Tower of Power, is back on vocals (swapping with Andy Vargas) and on the rocking trombone. Cindy Blackman Santana is once more behind the drum set, tearing through maybe the last drum solo you ever need to hear.

Santana is the Vegas resident headliner who is in fact a resident. He lives here, and has been involved in many local charities (especially Spread the Word Nevada, Las Vegas Rescue Mission, Three Square Food Bank and Habitat for Humanity) along with his international Milagro Foundation.

“It means the world to me to watch what is happening. you see rubble and cactus, and then you blink, and there is a brand-new, state-of-the-art shopping mall,” Santana said. “You see rubble and cactus, and the next thing you know, there’s the Raiders’ home stadium. I mean, this place is a manifestation of spirit that invites people to reach their dreams and aspirations.”

Santana, too, is something of a manifestation. He’s ever-thankful to still rock ‘n’ roll at age 74.

David Tatlock’s Soul Juice Band album-release show is 7 pm. Friday at The Usual Place in downtown Las Vegas. Tatlock’s horn-driven, funk-soul band has as much horsepower as his ‘79 Datsun King Cab 620. The show is a partnership with Kidz Uplifting Kidz organization, collecting clothes and toys at the show to be delivered at Clark County Family Services. Tickets are $25, and these guys get it on, trust me.