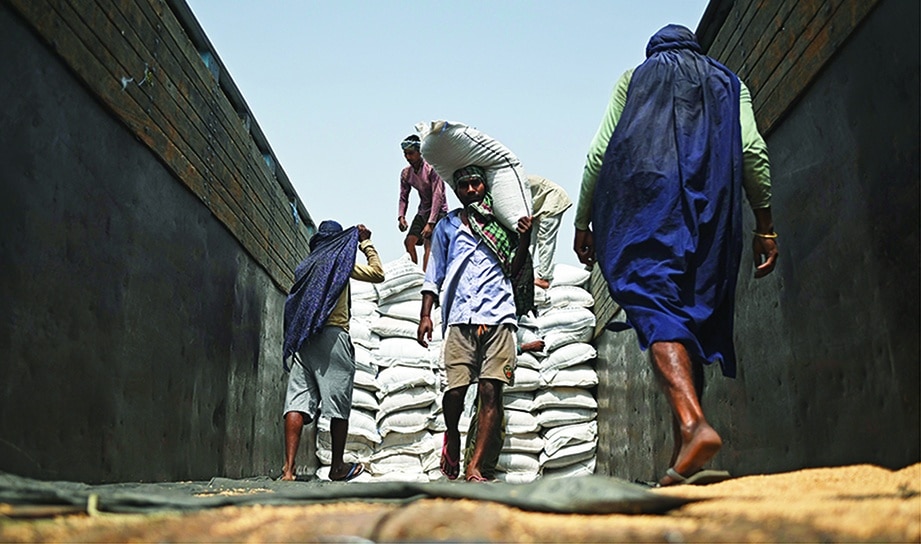 KHANNA, India: When New Delhi banned wheat exports as prices soared over Russia’s invasion of Ukraine it provoked consternation abroad and drove the cereal even higher. Now Indian farmers and traders are fuming they have been denied a windfall as domestic prices have plummeted.

India is the world’s second-biggest wheat producer, but the government-itself the country’s biggest buyer of the crop-said it chose to protect food security for its mammoth population despite inflation concerns. The move-along with dwindling global supplies from Russia and Ukraine, both among the world’s top five wheat exporters-sent prices to all-time highs on commodity exchanges in Chicago and Europe.

But at Asia’s largest grain market in Khanna, in India’s breadbasket state of Punjab, values went the other way. Every year, thousands of farmers from the wheat-growing region sell their produce at the facility, which is dominated by a dozen giant storage sheds, each the size of a football pitch.

From 2,300 rupees (about $30) per 100 kilograms of wheat before the export ban, prices slumped to 2,015 rupees-the government-set minimum price at which it buys grain for its vast public distribution system. India’s hundreds of millions of small farmers eke out a borderline existence, subject to the vagaries of the weather, and some in Punjab were already reeling from production losses due to a severe heatwave.

The price fall represents the difference between a bumper payout and heartache, they say. Farmer Navtej Singh saved half his 60-tonne wheat harvest to sell during the lean season, when prices normally rise, and is aghast at the government’s decision. Now he is scrambling to sell his remaining stock. “This ban has come as a shock,” he told AFP. “The price has dropped to the lowest and doesn’t even cover our expenses. I can’t even wait for a day.” The authorities had not consulted anyone and had acted “selfishly”, he said. “We were already hit with production losses this year, and the ban order has made our life difficult.”

Before the war in Ukraine and the heatwave, India’s wheat production of 109 million tons in 2021 and seven million tons of exports had both been expected to rise this year. Prime Minister Narendra Modi last month even offered to help plug the global wheat deficit and “feed the world”.

But extreme weather conditions are becoming more frequent in a phenomenon experts say is driven by climate change. After producers in Punjab were hit by a heatwave, the national harvest came in at four million tons less than expected. Now federal and state authorities are cutting procurement for the public distribution system, which provides free and highly subsidized grains to nearly 800 million people, as food security schemes set up during the coronavirus pandemic are cut back.

Even so, retail wheat flour prices are at a 12-year high, and Manish Pajni, head of the Punjab government’s grain procurement department in Khanna, has backed the ban, saying wholesale rates could have gone as high as 3,000 rupees without it. But trader Raj Sood said the government should have adopted a wait and watch policy before abruptly halting exports and causing market turmoil.

“The market was already under stress from the harvest crisis and, without a thought, the government came up with the ban,” he said. “No doubt the major losses will be incurred by big exporters like Cargill, ITC and Glencore, but small traders and farmers will also be impacted.”

And many businessmen in Khanna say the measure will only have a temporary effect as the rules of supply and demand are unavoidable. Flour mill owner Divender Verma usually obtains his raw materials from government stocks but said they were running at their minimum. “This time we do not hope they can provide for us. So the scenario for wheat is tight,” Verma told AFP. Private suppliers will inevitably charge more, he added-further driving up prices for bread and other wheat products. – AFP