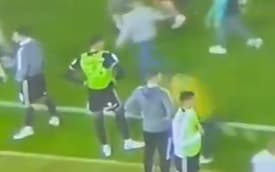 The incident occurred as Forest fans invaded the pitch to celebrate their victory over United, which secured their first trip to Wembley in over 30 years.

Forest released a statement after the match: “Nottingham Forest Football Club are appalled to learn that our former player, Billy Sharp, was assaulted leaving the pitch after tonight’s match at The City Ground.

“The Club will work with the authorities to locate the individual in order they are held to account for their actions, which will include a life ban from Nottingham Forest.

“The Club would also like to apologise to Billy personally and to Sheffield United Football Club.”