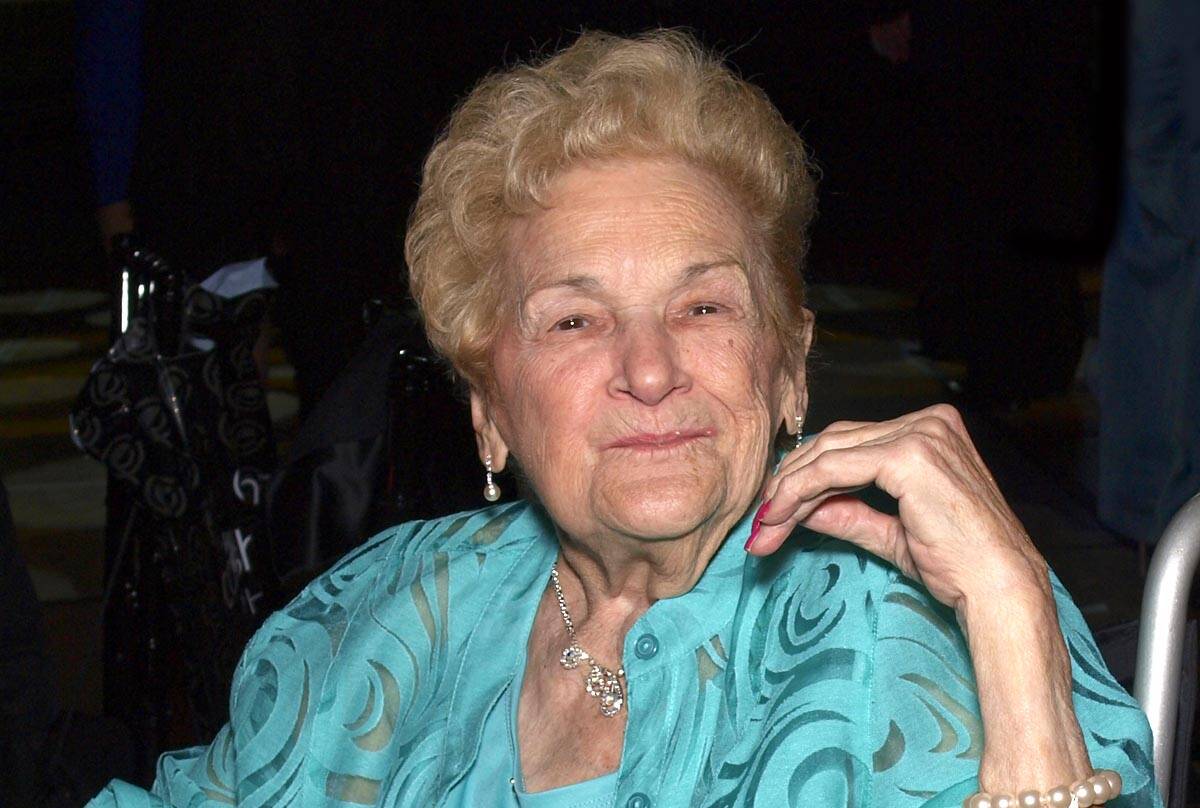 The matriarch of one of Las Vegas hospitality culture’s royal families has died.

Ruvo and her husband, Lou; along with their only child, Larry; established the Venetian Pizzeria in downtown Las Vegas in 1955. The restaurant has long been recognized as Las Vegas’ first pizza restaurant. In 1966, the family launched the Venetian Ristorante and Pizzeria on West Sahara Avenue, where Herbs & Rye sits today.

“My mom was the first celebrity chef, when you think of all the famous people who visited our restaurant,” Larry Ruvo said Thursday afternoon. “We had Frank Sinatra, Vic Damone, Perry Como as regulars. These were huge stars in those days. They loved the atmosphere and being around my family.”

The Ruvos opened the Venetian Ristorante with Albert and Maria Perry, who was Angie’s sister and lived to age 102 before passing away in 2019. The Ruvo family tree’s Vegas branches extend to Lorraine Hunt-Bono, who is Marie’s daughter, a former Clark County commissioner and lieutenant governor, and co-owner with Dennis Bono of Bootlegger Bistro.

Among Larry Ruvo’s favorite Venetian stories is from the Venetian era, during the days Sinatra headlined at Circus Maximus at Caesars Palace. Caesars had just opened a fancy Italian restaurant, The Piazza. But its most famous headliner, who happened to be Italian, was not eating at The Piazza.

Instead, Sinatra enlisted a bellman to pick up dinner orders from the Venetian every night.

A Caesars exec explained to the young Ruvo that Sinatra’s orders were casting a pall over The Piazza. Ruvo, an exec for the burgeoning Best Brands liquor distributorship, had to explain to Sinatra that his orders from Venetian were a concern. Sinatra responded by angrily demanding every couple entering his show at Caesars be given a bottle of Rene Lalou, the most expensive champagne sold by Ruvo’s company — with Caesars paying the cost.

Sinatra’s ticket prices were increased from $35 per couple to $50 per couple to cover the champagne cost. And Ruvo’s company became the largest Rene Lalou distributor in the world.

“Sinatra’s loyalty established our company in Nevada, and it was all because of his relationship with my family,” Ruvo said. “And, he continued to eat my mom’s food at the Venetian.”

Among Angie Ruvo’s last public appearances was at a George Strait show, celebrating her 96th birthday, at T-Mobile Arena. When she met Strait, she pulled him down hard enough that his cowboy hat fell off. Then she kissed him on the cheek.

“I want you to be there for my 100th birthday,” Angie Ruvo said. Strait grinned and answered, “Oh, I’ll be there.”

Among Ruvo’s survivors are Larry and his wife and Cleveland Clinic co-founder Camille Ruvo; her granddaughters Nicole Ruvo Falcone (Michael Falcone), Lauren Marie Ruvo Carroll (Dr. Matt Carroll), and Brianna Angelina Ruvo; great-granddaughters Angelia Alessandra Ruvo Falcone and Gaia Noria Ruvo Falcone and newborn great-grandson Oliver Lawrence Ruvo Carroll. Such friends who were as close to the Ruvos as family include Dennis Gutwald and his family; and Michael Severino and his wife, Denise.

Larry Ruvo said his mother’s last wishes were to see the family, and meet her two-week-old great-grandson.

“She said, ‘I want to see the family, the grandkids, and great-grandson Oliver Lawrence, who is the first boy born into the family since I was born,” Ruvo said. “She just said, ‘I really want you to know how much I love you,’ because in the end it was all about the family.”

Angie was caregiver to her husband, Lou, after he was diagnosed with Alzheimer’s. Her dedication to his care led Larry Ruvo to establish the Angie Ruvo Careging Chair, to recognize her dedication as a caregiver.

Funeral services will be private. In memory of Angie Ruvo, donations can be made to Keep Memory Alive and the Cleveland Clinic Lou Ruvo Center for Brain Health.

Nevada Ballet Theater is celebrating its 50th anniversary on Saturday night with an hourlong performance at 7:30 p.m. Saturday at Reynolds Hall at The Smith Center. NBT co-founder Nancy Houssels first performed in Las Vegas in the “Szony & Claire” act with Francois Szony at the Dunes in 1966. She is still onboard with NBT, as the company’s co-chair, along with Jerry Nadal; with Beth Barbre executive director and CEO; and Roy Kaiser the artistic director.

On May 20-22, NBT takes on one of its most ambitious programs for its season finale, “Carmina Burana.” Members of the Las Vegas Philharmonic, under the direction of Donato Cabrera, and the Las Vegas Master Singers are also taking part. All this dance, music and singing artistry is also at The Smith Center, at 7:30 p.m. May 20 and 21, and 1 p.m. Sunday.

Viva! to this show

“Vegas! The Show” has set a May 27 return to Saxe Theater at Miracle Mile Shops at Planet Hollywood. “VTS,” in shorthand, joined “Zombie Burlesque” as the final two shows to shut down because of COVID on March 17, 2020. The show runs 7 p.m. daily, dark Sundays after its May 29 performance. The format remains unchangd, with producer David Saxe taking audiences through a Vegas entertainment time capsule.

Michael Shapiro’s Reckless in Vegas retro rock trio has announced its June 30 opening at Sahara Theatre, with shows running Thursdays and Fridays in a six-month agreement with the hotel. Tickets are $50 (not including fees) and available “soon.” The roster is Shapiro on vocals and guitar, Jack E. Roth on drums and Chris Nichols on bass and vocals. The band is redoubling its artistic approach, which is to crank out rocked up variations of classics from Sinatra, Dean Martin, Elvis, Sonny & Cher, Neil Diamond, Johnny Cash, Frankie Valli and Bobby Darin. It’s a wild ride at the place where Speed rollercoaster once raced through the property. Yes, we remember …

“The Cocktail Cabaret” is returning to Vegas on Sunday at the Italian American Club Showroom. Doors at 5 p.m., dinner at 5:30 p.m. and show at 7 p.m. Keith Thompson’s original concept stars Phil Fortenberry on keys, with Eric Jordan Young, Maren Wade, Niki Scalera and Doug Carpenter. Tickets are $75 for dinner and the show, go to iacvegas.com.